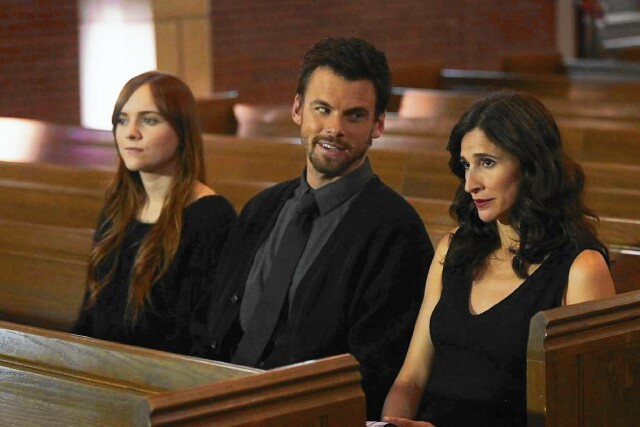 Most people suck.  That’s not to say that they’re bad people, but most human beings are fairly narcissistic by nature, which does kind of suck, right?  I know that’s not an idea everybody subscribes to, but it feels pretty accurate to me.  The folks at Hulu must agree, because they leaned right into that idea with their original series Casual (now in its third season), which gives its viewers an up-close and super-personal look into the lives of some veryflawed people.  This surprisingly relatable yet unconventional family unit is charismatic, snarky, and fun to watch, even when sh*t gets dark (and does it ever).

The appeal of this show is due in large part to the brutally honest character depictions brought to life by its cast, series creator Zander Lehmann and the several talented directors that’ve worked on the show (a group that includes actors Fred Savage, Lake Bell and Carrie Brownstein and Junodirector Jason Reitman, among others).  Even though the finished product is a tad more dramatic than the all-out laugh-fest it was marketed as, it’s still pretty clear why Hulu felt the need to commit when it came to Casual.

Michaela Watkins plays Valerie Meyers, a therapist who recently moved with her teenage daughter Laura (Tara Lynne Barr) into her brother Alex’s house after splitting up with her cheating husband Drew (Zak Orth).  Alex (Tommy Dewey) is a self-obsessed bachelor who made his bones by creating Snooger, a dating site that he mainly uses to get laid.  To be fair, he’s not the only character who seems perpetually self-involved.  Along with crippling disillusionment, self-obsession seems to be a running theme in the series. (Barr, Dewey and Watkins are pictured at top, left to right.)

On the inside Alex is concerned about whether or not he’ll ever find himself in a legitimate romance, but he uses sarcasm and faux confidence to maintain a safe emotional distance from the rest of the world (which is counter-intuitive).  He’s definitely depressed, and generally buries his emotions. He obviously cares deeply about his niece and sister, but he’s so hung up on himself that he approaches almost every situation based on how he feels as opposed to taking an empathetic approach.  Even his affable best friend Leon (Nyasha Hatendi) gets the short end of the stick, because Alex is “just the asshole who shows up when he needs something.”

Laura is … a handful.  She’s the product of an upbringing that afforded her an unhealthy amount of freedom, which probably explains why she sees herself as an adult and regularly challenges her authority figures.  She openly drinks and was sexually active by age 16, but at the end of the day she’s a kid.  She often finds herself in situations that are a result of age-appropriate emotional immaturity.  The fact is that teenage girls and narcissistic self-obsession tend to go hand-in-hand, so there isn’t too much need for explanation in that respect.

Valerie is in the middle of a “quarter-life crisis.”  Her marriage was the foundation upon which she built her identity as a wife and mother, and its failure left her feeling lost, unwanted and helpless.  She copes by almost unwittingly placing herself in scandalous sexual predicaments.  At first she was genuinely juggling motherhood, sisterhood and trying to find herself, but ironically, the more that she did the latter, the more selfish (like Alex) she became.  Watkins does a great job of conveying the frenzied desperation of a woman trying to re-figure it all out, all while displaying a sincerity that makes it easy for viewers to take the emotional ride with her (even if they are shaking their heads while they do it).

On the upside, the trio has a great dynamic.  Season 1 established them as a cool, funny, “I wish my family was like that” kind of family.  Season 2 showed us just how deep the cracks in their pretty little picture really went.  Sure they’re all broken, but they’re all broken together, and at the end of the day nothing ever really gets between them.  Watkins, Barr, and Dewey have an onscreen chemistry that frankly creates a pretty endearing representation of a familial relationship that can only be described as co-dependent.  Season 3 delves even deeper into the ins and outs of their relationship as they all continue to pursue happiness for themselves.

This show can be hilariously quotable at times, and more often than not those quotes come out of one of their mouths.  This, combined with the fact that Alex and Val had shitty parents, softens the blow of what I believe is the show’s true underlying message: Most people are awful, not because they want to be, but because life taught them to be that way.  Either way, they still deserve love.  Alex and Val’s parents, Dawn and Charles (Frances Conroy and Fred Melamed, respectively), are the poster children for self-importance.  They never once put their children’s feelings before their own desires, and when that emotional trauma is taken into consideration it gets really hard not to want to give Alex and Valerie a pass when they’re at their worst.

At the end of the day, maybe Laura, Alex and Valerie aren’t the greatest people.  Sometimes they’re not even good people, but honestly, isn’t that everyone?  That’s the magic of Casual:It manages to shine an endearing light on some of the “worst” people, regardless of how much baggage they have in tow.

We all have baggage, and desires, and fears, and none of us are perfect.  It isn’t a huge leap to assume that we all maintain a safe emotional distance from life in some way.

I mean, why else would the option of keeping things casual be such a popular one?