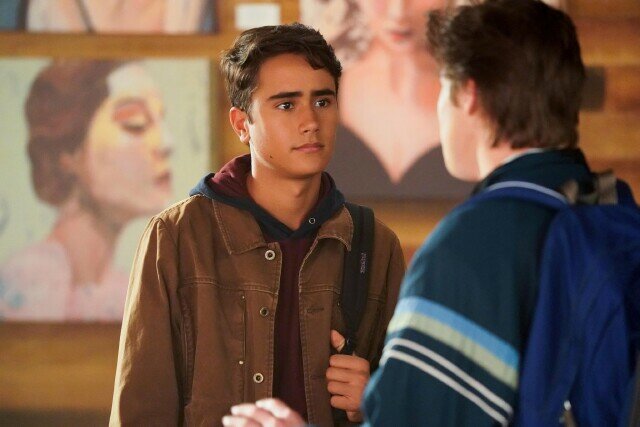 Pride month is officially underway, and just in the nick of time Love, Victor -- Hulu's critically acclaimed queer coming-of-age rom-com -- is back for season two! If you recall the events from last year, there was a pre-premiere shakeup, moving the series from the originally announced Disney+ over to its sister streaming site Hulu due to execs feeling the series did not match the "family friendly" programming they were striving for at what was to be its first home. (You can read my thoughts about that here.) Our titular high school hero Victor Salazar, adorably portrayed by Michael Cimino, starts off the season mere seconds after last season's cliffhanger, ready to make an announcement to the world, but more terrifyingly for him, to his family.

"Mom. Dad. I'm gay," Victor says, voice shaking, waiting for a response. He receives an immediate embrace and "I love you" from his little sister Pilar (Isabella Ferreira), but his father Armando (James Martinez) is in shock and confused, asking "When did you decide this?" That's a question often posed when someone is coming out, suggesting one's sexuality is a choice. Victor's mother Isabel, vulnerably and wonderfully portrayed by Ana Ortiz, is at a loss for words. After suggesting everyone get some rest and they speak in the morning, we then jump ahead 10 weeks to the end of summer. Victor, his schoolmate/co-worker/first boyfriend Benji (George Sear), his dorky but loveable neighbor Felix (Anthony Turpel) and his girlfriend Lake (Bebe Wood) have become a tight-knit group while Mia (Rachel Hilson), Victor's ex -- who was heartbroken after catching him and Benji in a kiss – is now a camp counselor out of state.

Armando and Isabel have separated and he has moved into a new apartment. He is hilariously cringey in his growing acceptance of Victor's coming out. Isabel, on the other hand, is internally devastated. She refers to Benji as Victor's "friend," barely even speaks to her son and could not be more uncomfortable when he visits their home for the first time. She's anchored herself in her faith and religion, seeking a place of solace and relief when her world feels like it has been turned upside down. I find it especially interesting that the writers made Isabel the unaccepting parent when we've often seen that role go to the patriarch of the family, usually embedded in bigotry and machismo. It's Victor and Isabel's relationship and growth this season that stands out for me and I applaud Michael Cimino and Ana Ortiz for their fantastic performances in their roles.

We actually see a tremendous amount of character growth and complexity in season two (more so than the first season), not just from the Salazars, but also Victor's friends. Felix and Lake's budding relationship is put to the test when Felix is forced to be a level-headed grown-up and care for his ailing mother while trying to balance school and a part-time job. The series has continued to avoid falling into the pit of teen rom-com tropes with popular jock Andrew (Mason Gooding) who has become less of a jerk to Victor and Felix and has done some soul searching and growing up during his summer off, growing closer to his old flame Mia.

While season one focused mainly on Victor discovering who he is while being the new kid at school and juggling his crushes between Mia, the most popular girl at school, and his out and proud co-worker Benji, this season switches gears and highlights the aftermath of Victor's coming out in a very raw and emotional but grounded and relatable way. Sure, we can all just hope and wish that no one will give a second thought to a loved one revealing their sexuality to them, but it doesn't happen that way, nor should it always be depicted that way.

When I first saw Love, Simon, the 2018 film directed by Greg Berlanti which shares a universe with Love, Victor, I was still "in the closet." I related to Simon in that he wanted to come out but feared the unknown, having no idea how the people around him would react based on how other LGBTQ+ people he knew were being treated. Just over a year after seeing the film, I myself was outed to my parents. When I was confronted, I was of course emotionally devastated and furious at the person who outed me, but when I got back home and told my boyfriend what had happened, I felt a slight sense of relief. I had already told everyone that I wanted to know, except for my parents. Sure, this wasn't how I wanted them to find out, nor did I appreciate being blindsided on my first visit back home after moving out for the first time, but I felt a massive weight lift off my shoulders. I was out. And I was proud. Scared still, but proud. It made Victor's entire experience so reflective of my reality.

Love, Victor champions so much of the experience that LGBTQ+ youth go through, especially those that are BIPOC and come from families that are deeply religious or are part of hetero-normative cultures. It brings a much-needed balance between the tragic tales of perseverance and happy-go-lucky depictions of LGBTQ+ coming out stories. Those experiences are anything but binary. Sometimes one parent is more accepting than the other. Sometimes they're entirely accepting but a sibling barely tolerates it.

More often than is acceptable, teens and young adults are forced out of their homes and estranged from their families after coming out. Love, Victor shows that there can be struggle without trauma. Season two continues to showcase these experiences in a wonderfully relatable and grounded way. I wish I had queer characters I could really relate to on television and in movies when I was younger, but I'm so glad that Victor (and Simon) came along when they did.