Inside the Politics of FX’s “American Horror Story: Cult” 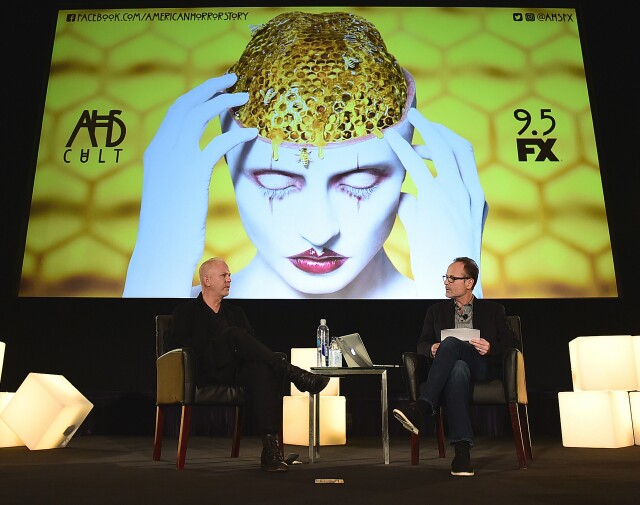 As FX’s hit series American Horror Story enters its seventh season, titled Cult, creator Ryan Murphy wants to make one thing clear -- despite having a political backdrop, it is not about our current president.  Speaking to reporters in Los Angeles recently at an advance screening, Murphy (pictured at top left opposite FX Networks CEO John Landgraf) had this to say about any pre-conceived notions concerning the politics of the series’ latest installment:  “This season is not about Trump.  It's not about Clinton.  It's about somebody who has the wherewithal to put their finger up in the wind and see what's happening and is using that to rise up and form power using people's vulnerabilities.  I think that people have the wrong idea already about what it's going to be.  It’s about how [people] are afraid and don't know where to turn and they feel like the world is on fire.”

Last February Murphy ignited this non-controversy about the upcoming season during an appearance on Bravo’s Watch What Happens Livewith Andy Cohen when he told the host, “I don’t have a title but the season that we begin shooting in June is going to be about the election that we just went through.” When Cohen quizzed if Trump would be a character, Murphy would only say “maybe.”  Enraged Trump supporters called for an early boycott -- and Murphy may have committed ratings suicide.

“I've been reading about it online,” he told us.  “Conservatives, and people in the Rust Belt who have loved the show [have tweeted] ‘I'm out. I can't believe that you're tackling this.’  They don't understand that on our show every side gets it just as much.”

In fact, the premise of AHS: Cult was hatched years ago and is something Murphy had been toying with since season two.  It was finding a new take on an old phenomenon that proved challenging for the creator.  “For many seasons, the runner-up idea for the show had been Charles Manson and the Manson family,” Murphy explained.  “We're coming up on the 50th anniversary of that and I’d been researching it, but it never felt right to me.

“It’s also been done a million times and I didn't know how to make it fresh,” he continued.  “But the thing that I just kept being drawn back to was the idea about ‘cultive’ personalities.  I wanted to do it three years in a row but it was discarded.  This time last year, everybody was talking about the election, so around September 1st of last year is when the idea of the election being the jumping-off point [happened].  Then, mixing the idea of the Manson ‘cultive’ personality and somebody who rises like that, within a sort of disenfranchised community, took root.  The interesting thing is, at that point everybody thought Hillary Clinton was going to win in a landslide.  So the opening [of the series] was a little different.” 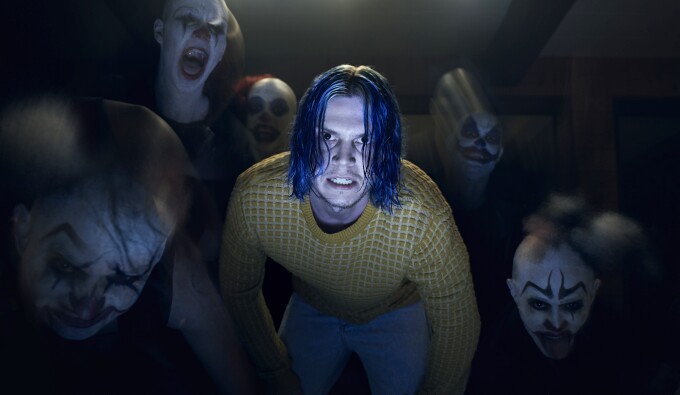 According to Murphy, switching the winning candidate was easy as the central character (Kai, played by Evan Peters, pictured above) rises because of the anger in the country. “Most writers' rooms are very, sort of, emotional situations,” he explained.  “You come in, have a cup of coffee and gossip. Nobody in that group of twelve people wanted to talk about anything other than [the election].  There was so much passion pro and con for both candidates that I wanted to tap into that zeitgeist thing.  So, that's when it happened.

“We're trying to understand how someone who was very charismatic can rise up in the culture and become a leader,” he added.  “What are they tapping into?  And now, the question is, how did Trump get elected?  What did he tap into as a candidate?  We don't have to say that we love or hate Trump, but we were interested in his rise and how that happened.”

Early boycotts aside, FX is anticipating a huge reception to the series.  Social media numbers for early promotional material were, well, yu-u-u-ge.  In their first week of release, both the trailer and opening credit previews attracted a staggering 58 million views on various social media channels, along with eight million content responses defined as “likes,” “comments” or “shares.”

Murphy says writing this season has proven “weird,” with things penned last December already coming fruition.  And while there will probably be fall-out from some of the themes tackled, he doesn’t expect anything close to what Kathy Griffin endured following her recent experience with “artistic expression.”

“Part of being an artist is to be able to write about the world that you live in and the times that you're a part of,” he said.  “We've been very careful to be fair.  I don't think that you're going to watch the show and see anything like what Kathy went through, because that's not what we're writing about.  We're not doing that; we're not burning people in effigy … we're not doing anything extreme like that.”

As for those inevitable presidential tweets, Murphy says he’s ready.  “I'm prepared,” he laughed.  “I'm prepared to say nothing.  I would hope that he would have more important things to do.”