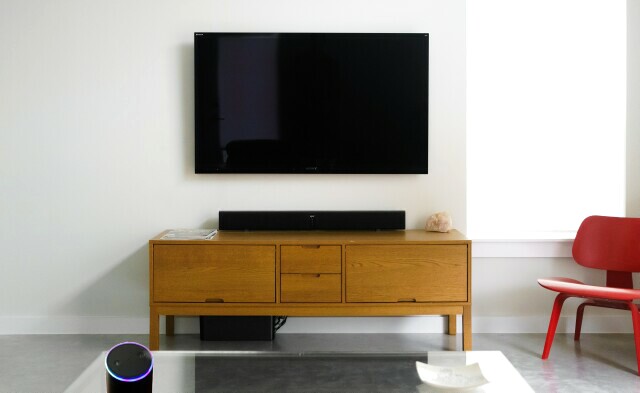 Close to the finish of a Mr. Robot episode two years ago, FBI agent Dominique DiPierro, played by Grace Gummer, lies on the bed of her New York City apartment.  Her Amazon Echo device, with Alexa voice capability, is on a small table nearby.  DiPierro asks a series of questions, each answered within a few seconds by Alexa in a soothing female tone. The camerawork shifts from bed to table and back with each question and answer.  The final question:  “Alexa, do you love me?”  Cut to the table.  Big pause … and no answer.

If Mr. Robot creator/writer/director Sam Esmail were to make a sequel of this scene, he might have Gummer’s character speak directly to her television set, rather than a table-top Echo.  A fast-growing number of smart TV sets and TV-connected devices -- Amazon Fire TV included -- deploy artificial intelligence-powered voice features inside these products.  What’s more, it appears every smart set and device recently constructed gives users the power to control via voice how they watch and use TV -- with the help of Alexa, Siri or Google Assistant.  Bixby, another voice format, became a prime feature of new Samsung smart TVs last winter.

Some industry analysts believe the ability to control these products by voice may eliminate the last barrier to entering the era of interactive TV, an era feverishly anticipated since the 1970s when cable subscribers in Columbus, Ohio, could play with the experimental Qube service.  With more voice-powered sets a given, and the voice formats themselves getting more sophisticated in language and ability, there’s a degree of belief that indeed, the ITV age is finally underway.

“It’s hard to say at the moment what the traction will be or the impact on overall TV use without data,” says Peter Katsingris, Nielsen’s Senior Vice President of Audience Insights.  “I feel the easier technology is for consumers to use, and the [more] comfortable they are with it, the more likely they will be to take advantage of it.”

If ITV hasn't fully left the starting gate, it's certainly very close, muses Stephanie Mitchko-Beale, Chief Technology and Operating Officer at Cadent.  “The smart TV ecosystem is a new, emerging tool for consumers, especially young consumers,” she explains.  “The ability to incorporate intelligent data across all of these devices is going to have an important transformational effect [on] commerce, content -- either its curation or creation -- and absolutely advertising.  The use of AI lends itself to targeted advertising, the holy grail of what marketers and brands have been looking for [over the] years on TV.”

Mitchko-Beale, who spent 15 years in various roles at Cablevision Systems (now part of Altice USA) before moving to Cadent, believes once consumers buy a smart set or device incorporating AI, it will be a quick learning curve to command what they want or wish to see.  “People I know talk about these [services] as if they’re a person," she says.  "My parents use Alexa to make phone calls, buy things and find content on their TV.  As voice recognition and natural language processing continues to mature, the adoption we’re seeing will exponentially explode.”

Two developments will help fuel the movement to voice-command TV in Mitchko-Beale’s estimation.  One is a common level of sophistication among all the voice formats, no matter what smart set or device someone buys.  The other is the introduction of voice-activated remote control by multichannel cable and satellite operators as an always-available consumer option.

There’s still work ahead to reach that common benchmark of voice sophistication, Mitchko-Beale says.  “We’re in the early, early stages of capability under machine-learning technology and natural language recognition … (and) those things are progressing very, very quickly.”

When interactive advertising and commerce take off, marketers will personalize their campaigns to consumers in one-to-one-fashion, she adds.  “Addressability and measurement for that are key, where the marketer can measure return on investment, know they’re reaching the right people with the right message, and can measure change in behavior.  Our addressable ad team is seeing a lot of interest here, and advertisers are coming to our table.”

With all the speculation about Walmart launching a smart TV/device-distributed programming service as early as this Thanksgiving/Christmas holiday season, keep in mind the retailer’s recent agreement with Microsoft to use its streaming technology -- and the fact that Microsoft has its own AI voice format, known as Cortana.  The result could be a combo of interactive content and commerce venture.

“Companies like Walmart, who have huge subscriber bases and lots of data about what their subscribers buy and how they use products and services, have the ability to create a marketplace within programming,” adds Mitchko-Beale.  “It’s funny in a way to have Walmart and programming in the same sentence.  But companies like Walmart can easily create packaged offerings with video services or launch content that includes commerce opportunities for the plethora of products they offer consumers.  I don’t know if they want to take over the world, but they are well-suited to have a service like that.”

As for content, there will be several ways AI might impact the kind of content people see, from choose-your-own-direction formats to camera angle selection at any moment.  Mitchko-Beale foresees a situation where an episode is automatically tailored to someone’s behavior, using AI.  “The content might know that one household wants to walk away laughing, while another household wants a cliffhanger and another wants to cry at the end and be emotionally involved,” she suggests.  “This will require a sea change in content production to make all these alternative character scenarios produced and available.  That will happen.”

This is the third in a series of columns by Simon Applebaum about recent advances in smart TV.