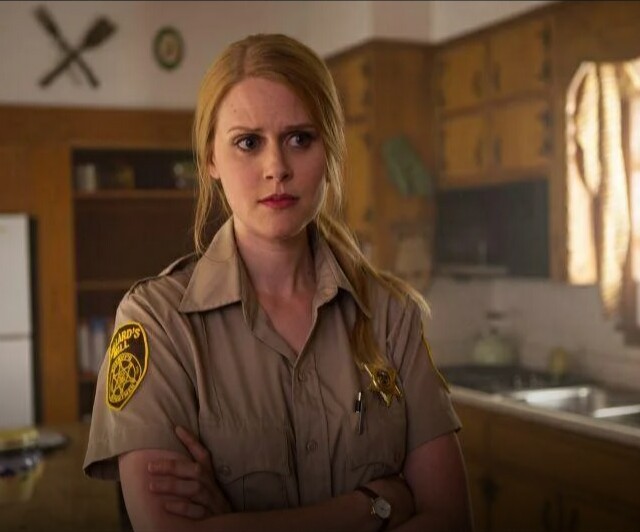 Janet Varney’s got a lot goin’ on.  Her role as the voice of the titular character in the world-famous animated series The Legend of Korra aside, for three years she’s also been doing the damn thing as Sheriff Evie Barret on IFC’s hilarious horror comedy Stan Against Evil.  Recently, she created, co-wrote and starred in the comedy Fortune Rookie, which streams on IFC.com and YouTube.  Varney plays a fictional version of herself who, after randomly being told she should be a psychic, decides to give up her lucrative acting career to do just that.  Oh, and she also co-stars in the acclaimed FXX comedy You’re the Worst, set to begin its final season in a few weeks.  With Stan's season finale approaching, Varney recently took some time to talk about working on that show and everything else she’s got to be thankful for this year.

Ainsley Andrade:  How did you come up with the idea for Fortune Rookie?

Janet Varney:  I’ve really been fascinated with the idea of the paranormal and psychic powers my entire life.  When I think about the amount of time I spent trying to guess cards out of a deck or just staring at a ball across the room, thinking if I tried hard enough I could will it to roll across to me, it’s actually very sad.  (laughs) Then I sort of matured into an adult who had an extremely healthy dose of cynicism, but -- it’s very Fox Mulder of me -- there’s a part of me that just still wants to believe.  I just want to believe it’s possible and I’m always waiting for someone to establish definitive proof of ghosts, all that kind of stuff.  I don’t want to let go of that, yet I feel so cynical about it; those two parts of me are trying to coexist in the same body.  I think that’s true for a lot of people.  It’s definitely true for creative types, because we live with these broad imaginations where that kind of thinking is sort of fostered, but if you’re in comedy you’re also trained to just shit on everything.  Pardon my French.  So for me, it’s kind of combing those two things into one show. 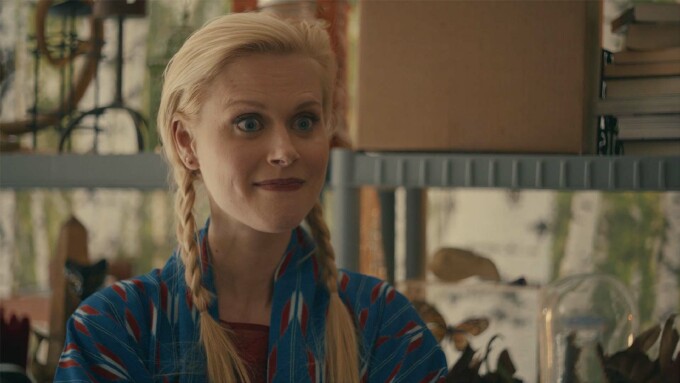 I was so fascinated with the idea of how perfect Los Angeles is as a city, to have people who are vulnerable to that kind of stuff.  So that’s sort of where the inception truly came for this idea of this version of me (pictured above) who is kind of more of a jerk, and more self-absorbed than I consider myself to be.  When she’s told she’s psychic -- the only thing that’s more attractive to her than being an actress -- she just sort of drops everything to be the psychic that she’s told she is, and then, you know, she’s terrible at it.

Andrade:  So, I’m getting the vibe that you don’t really buy it, but you want to?

Varney:  Exactly right.  I so want to be proven wrong.  I’m so ready for someone to blow my mind.

Andrade:  It just hasn’t happened yet.  There were a lot of cameos on Fortune Rookie, some of whom were coworkers from your other shows, like Stan Against Evil.  What were some of your favorite cameos from those appearances?

Varney:  With Stan we’ve had just such an extraordinary group of guest stars it’s hard to even pick.  Scott Adsit (30 Rock) this year is a favorite.  He’s on Fortune Rookie as well as having a guest star role on Stan – so there’s some wonderful IFC love and crossover there.  He and I have been friends for many, many, many years, and he is one of the most brilliant improvisers that I know, and also just such a terrific actor.  So, it’s sort of unplanned, but in both shows he gets to play this sort of villain character, but it’s this kind of preposterous villain in both circumstances. I cannot claim that he gets to be a demon in Fortune Rookie, but he certainly does in Stan Against Evil.

We had Christopher Mintz-Plasse on Stan Against Evil playing a vampire and he just hit it out of the park.  All the stuff he brings to the table I think works so beautifully with the idea of him as this kind of angsty, neurotic vampire, which is really fun. 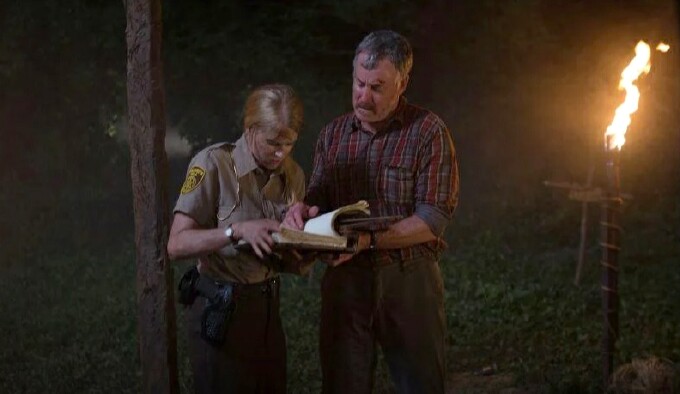 Andrade:  How do you feel about watching episodes of Stan when they premiere on IFC?

Varney:  John C. McGinley (pictured above, right) and I work together a ton, so those moments where he has kind of his own storyline and I don’t get to see it being shot [are rare], and when the episodes come out I’m seeing them as a fan.  I don’t have the kind of attachment that I do when it’s stuff that I’m in.  I really enjoy watching the show.  I love getting to see stuff completely fresh, the first time, with the fans.  I tend to live tweet whenever I can because that makes it even more exciting for me because I really am sharing my experience with viewers who are seeing it for the first time as well.

Andrade:  So you never really get to see the episodes beforehand?

Varney:  I’ve had the pleasure of seeing a handful a little early, but the last two episodes [that comprise Wednesday’s one-hour season finale] are not among them, so they will be entirely new for me.

Andrade:  Oh, that’s going to be cool.  We’ll all see it together.

Varney:  (laughs) There you go!

Andrade:  You have the final season of FXX’s You’re the Worst coming up.  How do you feel about that?

Varney:  It’s very bittersweet.  I love that show so much.  It’s really kind of ridiculous how lucky I am to get to have worked on Stan Against Evil and You’re the Worst at the same time, because they are two shows I believe in so much as a fan.  I’m such a fan of the writing and the characters that I get to play.  They’re very different from one another -- obviously Becca [on Worst] is this horrible person (laughs) but it’s so terrifically fun to play her and to get to interact with that group of people.  So we were definitely sad to see the show go but, at the same time, knowing that it was kind of a conscious decision and effort on everyone’s part, everyone was cool with it and got to really enjoy and savor that season rather than wondering like, “Oh, are we going to get picked up?”  Something that was born out of that that was very sentimental and freeing and delicious.

Season 1 of Fortune Rookie is available now on IFC.com and YouTube.  The Season 3 finale episodes of Stan Against Evil will be telecast November 21 at 10 and 10:30 p.m. on IFC.  The final season of You’re the Worst begins January 9, 2019 on FXX.