Jared Padalecki on How Real-Life Events Inspired "Walker," His New Series on The CW 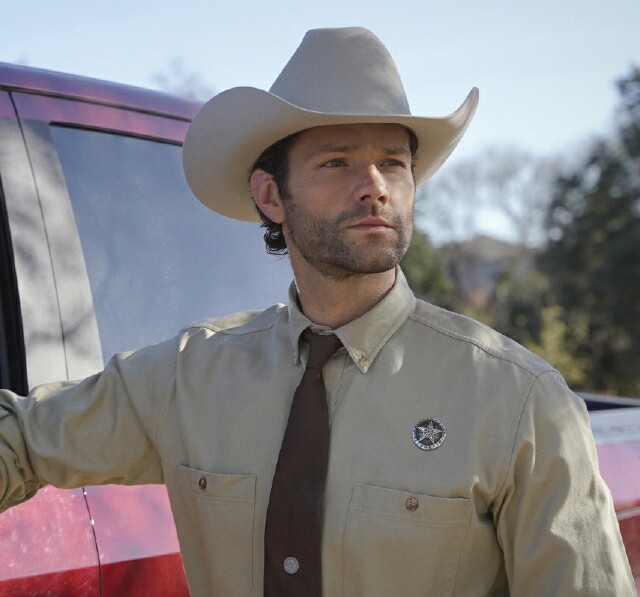 The CW has begun rolling out its mid-season 2021 programming, and with it the return of network stalwart Jared Padalecki (formerly of Supernatural) in Walker, a reimagining of the 1990s Chuck Norris series Walker, Texas Ranger. After 15 seasons of Supernatural, one might have thought he would take a break – but that's not the case.

Eager to work, Padalecki was the one who brought the idea to series showrunner Anna Fricke. "It all came about because Jared, for some reason, wanted to go back to work," she laughed during a recent virtual press event to promote the series. "I'm not quite sure why, but I'm very grateful. [We] sat down and talked about the character, [who] is a departure from the original and [our] own version. We had this great initial conversation about the kind of stories we wanted to tell, and the kind of character we saw Cordell Walker as. I think we hit it off and that's sort of how it all happened."

"I did grow up in San Antonio, TX, and Walker was certainly on the TV more times than I can count," recalled Padalecki. "I don't know if I would win a trivia game about the original Walker, Texas Ranger but I grew up watching the show. Certainly, after shooting Supernatural for 15 ½ years, it was a change. I have to give a shout out to Anna and our writers; the character they wrote for this version of Walker is so crystal clear and different from Sam Winchester (on Supernatural), so it was a seamless change from 15 years as Sam to the next 15 years as Cordell -- we're pretty excited about it."

One thing Padalecki and his diverse cast -- one that includes wife Genevieve, Lindsey Morgan, Mitch Pileggi, Coby Bell and Molly Hagan -- have had to adjust to is working in a COVID-19 safe workspace. Yet despite its challenges, they have all managed to bond. "The world we find ourselves in is very different, so it's been trying," said Padalecki, who is also a series producer. "We see each other wearing masks, we're six feet apart and we're not really supposed to talk to our fellow crew. That's been the most difficult part, [just] not being able to so seamlessly build a family, but in three short months, we've built quite a family.

"I think our text thread, which is probably not suitable for work, would prove that," he added. "I do tell Anna all the time, 'I don't know how they do this producing thing.' It's a full-time job, much less than trying to be camera-ready, but it's been a great time. We're all passionate about the show and the stories we're telling, so that passion and love for the work certainly gives me energy."

After calling Vancouver home for most of the past 15 years, Padalecki is thrilled to be able to plant roots in Austin, Texas (where he lives and where the show is filmed). According to Genevieve, being a part of the show and having her husband home with their kids is a godsend. "I think it's been wonderful for our marriage, because I'm out of the house!" she shared. "I'm not running the house, and he’s not commuting out of the country. Now [he] actually gets to see how we live, and he's actually up with [the kids] in the morning and usually putting them to bed, which is pretty normal but pretty special in our house."

"It's a little different," Padalecki laughed. "When I was home during the quarantine during Supernatural’s hiatus, she's like, 'Can't you go back to work somewhere? Don't you have somewhere to be? And stop giving the kids candy at 8:00 am.'"

Though not political in tone, Padalecki admits it was the actions of the Trump administration enforcing the zero tolerance policy at the Mexican border -- something he thought of as unfair treatment -- that informed his version of Cordell Walker.

"A few years back, when there were a lot of human beings coming from South of the American border, our society seemed to want to maybe put some people in cages and separate families," he recalled. "I read a story about a law enforcement agent who simply couldn't put a three-year-old in a cage and take them away from their parents. I have a three-year-old and I couldn't bring myself to do that.

"That empathy and emotion struck me; [being] caught between the inevitable rock and a hard place where you're bound by duty, but still have a moral code and you see people as human beings, not as perpetrators or heroes," he added. "I thought how interesting it would be to see that story told; where somebody who is a proud government worker for law enforcement, thinks to themselves, 'There might be a better way. Some of these laws are old and they're not nuanced.' Where somebody is bound by their duty and by a sense of safety and helping themselves helping others but is also a family man or family woman who has friends and family from all walks of life.

"We talked about wanting to pose questions, as opposed to sort of proselytized our beliefs and just force answers down our viewers' throats," he added in closing. "We talked about developing a story where we could dance around those topics and subjects and try and make people think, 'What would I do if I were in the same position?' That's how it started. Then Anna worked her magic and genius and now we're making a TV show."

Walker premieres Thursday, January 21 at 8 p.m. on The CW.