Jason Ritter Sets Out to Save the World 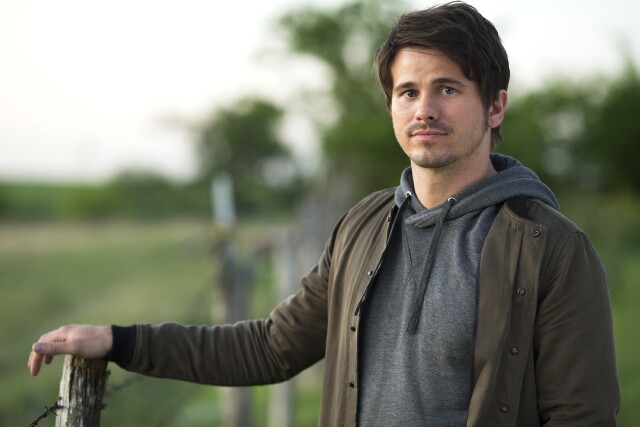 If it came down to it, I'd probably choose Jason Ritter to save us from ourselves -- and that's what the actor is doing on the new ABC comedy Kevin (Probably) Saves the World.  It has been my good fortune to frequently speak with him over the course of his career, and one thing has remained a constant -- he's probably one of the nicest guys on the planet.  As Kevin Finn, Ritter’s character is down on his luck.  A failed relationship leads to a failed suicide attempt, so Kevin decides to take a break from the rat race and reconnect with his sister Amy (JoAnna Garcia Swisher) and surly niece Reese (Chloe East) in Texas.  Unsure of his next move, Kevin is prepared to wander aimlessly through life -- that’s until a meteor crashes in the family’s backyard revealing a guardian angel named Yvette (Kimberly Hébert Gregory).  Soon Kevin is informed of his mission:  He is the last of 36 mortals in his generation chosen to restore hope to the world.

“I am a lot like him, embarrassingly enough,” Ritter laughed when I recently spoke with him.  “I have this almost obsessive compulsion to be liked by every human being, which can lead to problems because you try to please everyone and end up pleasing no one in a lot of ways.

“I’ve had to learn how to pick and choose and learn to allow someone to be disappointed by me and not be driven insane by it,” he continued.  “I think Kevin and I are both in new phases of our lives.  I don’t have to save the world, but I’m taking more responsibility for my actions and I’m getting married!  There’s no date set yet.  We’re still moving in.  It’s all new steps.”

While his character literally has the weight of the world on his shoulders, Ritter admits that's where any similarities end.  “No, I wouldn’t want that responsibility,” he said.  “If there was a shared responsibility maybe I could be one of 2000 people and that maybe would feel comfortable, but just the one guy?  No!  I would try and recruit.”

According to Ritter it was the complexity of Kevin that drew him to the role.  “I read it and worked really hard [to get it] because it’s one of those scripts that I loved so much,” he said.  “He was very fleshed out, very complicated and he’d gone through his entire life being very selfish and now is forced to live in a house with the people that he loves, that he neglected.  Now he’s forced to see how his actions reverberated in their lives in negative ways.

“He has a lot of regret and anxiety,” Ritter continued.  “And on top of that, for someone who has shirked as many responsibilities as he has, being tasked with being responsible for every human on the planet is daunting.  There were so many interesting dynamics to play and the fact that no one else can see his guardian angel … I didn’t know what that would be like when we first started shooting.  But it’s been fun.”

It’s through random acts of kindness that Kevin will (probably) save the world and in these times of uncertainty such behavior is not lost on the actor. “I feel that there is a contagious element to the energy that you put out in the world,” he smiled.  “You really feel it if someone screams at you in traffic or flips you the bird; you immediately feel angry.  It’s like they transferred their energy to you.  It’s the same thing with kindness.  Especially if you’re feeling particularly selfish on a day and someone displays some kind of beautiful act towards you.  It does bolster your day for a minute.  There have been a couple of times where I’ve sort of been faced with a beautiful moment from another human where I’ve gone, ‘Wow I would not have reacted like that’ and this person took care of me in this moment for no reason.”

While Ritter describes himself as “fairly spiritual” he’d like to believe, unlike his character, that someone is watching over him.  “I think that’s an interesting thing,” he said.  “I feel whether or not you think there is a God or if you’re on some kind of candid prank TV show, if you think someone is watching you may act differently.”

And with so much of our lives catalogued on social media, Ritter believes almost everyone does have someone watching over them.  “In a way I think it’s good because people are forced to be a little more responsible for what they say,” he explained.  “You can put something out on social media, get on a plane, land and find you have no job anymore, so people are being held accountable for what they say and I believe that is a good thing.”

Kevin (Probably) Saves the Worldpremieres tonight at 10 p.m. on ABC.