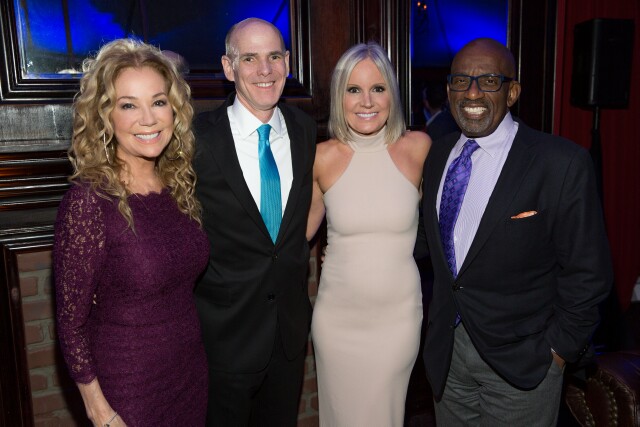 Pasadena, CA – As if TV personality Kathie Lee Gifford didn’t have enough going on with her role as co-host of the fourth hour of NBC’s Today, the versatile entertainer is adding movies for Hallmark Channel to the list. Gifford flew to Los Angeles last weekend to attend the annual and, as always, star-studded Crown Media Family Networks dinner celebrating Hallmark Channel and Hallmark Movies & Mysteries at the Winter Television Critics Association tour, where she enlightened me on her upcoming commitments with the network.

“I'm producing movies with a gentleman by the name of SQuire Rushnell, who has written nine best-selling books called God Winks,” Gifford explained. “They are about those unbelievable things that happen in life; the most unbelievable coincidences, like what are the odds? We don’t believe they are random or coincidences, we believe they are ‘God winks.’ It’s God divinely aligning with human beings for amazing things to happen.”

Three years ago Todaybegan including occasional ‘God wink’ segments and the idea blossomed from there. “Those stories have been rating through the roof,” Gifford said. “So we’ve been talking to [Crown Media Family Networks President and CEO] Bill Abbott and [Executive Vice President of Programming] Michelle Vicary for a while and we’ve finally got it done.  I’m so excited about it!” (Gifford is pictured at top left with Bill Abbott, Michelle Vicary and her Today colleague Al Roker, who is producing movies for Hallmark Movies & Mysteries.)

Gifford will act as both producer and host of the movie series and will compose some of the musical scores. She's thrilled, she said, to be associated with Hallmark Channel, which includes her daughter Cassidy in its stable of busy actors, making it a family affair. “Cassidy’s thing is completely different from what I’m doing,” Gifford explained. “But what’s more about family than Hallmark?  Nothing!  It always has been and the success they are having now is so thrilling. It’s really a channel for the times now. The world has gotten so dark and people do need some light and laughter.”

Gifford hopes her association with Hallmark may lead to other projects, some that may involve her first love, acting. “I would love to,” she said. “Hoda [Kotb, her Today co-host] and I just did another episode of [Bravos] Girlfriend’s Guide to Divorce, so we do a little bit of it and I have been asked to do a lot of things, but doing a daily show [keeps me busy].

“I really do love acting; it’s what I started as -- a singer and an actress,” she continued.  “I do see more [acting] in my future. I don’t sing that much anymore. I lost 25 to 30% of my breath capacity when my father was passing away about 14 years ago. I contracted pneumonia and really didn’t take care of myself in that time. The scar tissue on my lungs makes things difficult -- and if I can’t sing the way I want to sing then I don’t want to.

“I was never a great singer,” she admitted. “But I was a good singer, and I did sing professionally for 40 years and was so grateful for it.  But nobody was ever going to confuse me with Barbra Streisand!”