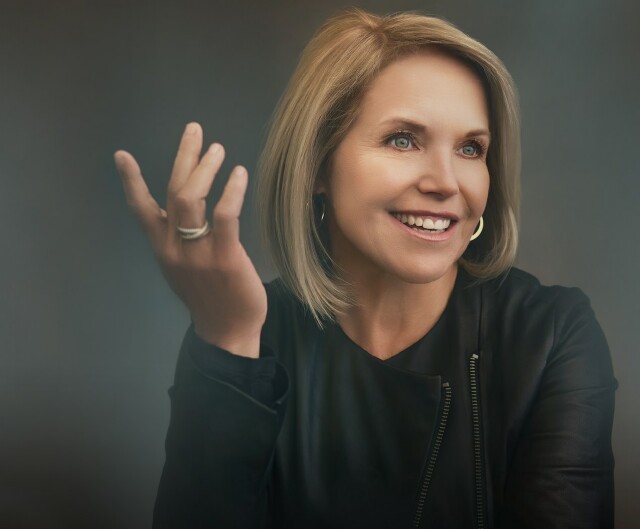 The level of anger thrumming through America like a persistent headache has left most people pondering what has happened to our country.  If you doubt the constancy of the rage and the news charting it, consider what happens when stuck at a meeting or on a plane without WiFi.  The moment you can reconnect, the immediate instinct is to scroll through headlines and then react -- yet those responses often reverberate in echo chambers.  With journalists all too often pinging from one story to the next, barely able to hit on the facts, it’s increasingly difficult to make sense of what is going on.  How does it all fit together? Why is this happening?  How did this come to be America today? Although journalists have traditionally taken a step back to try to figure out why events happen, on the National Geographic series America Inside Out with Katie CouricWednesdays, the former Today co-host and CBS News anchor instead takes a step forward.

Indeed, Couric takes thousands of steps as she traverses the country to get to the heart of issues plaguing America and tackles them in her usual forthright manner.  In the six-part documentary series she examines the fight over tearing down Confederate statues, being Muslim in America, the ever-growing reliance on tech and the mounting anxiety faced by working-class white people. This week’s installment is all about gender equality, and on May 16 the season finale with the disturbingly self-explanatory title explores The Age of Outrage.

The pilot, titled Re-Righting History, put into perspective the day neo-Nazis marched on Charlottesville.  Couric was there early enough that her cameras caught prayer services and the tension as the situation built to a hideous crescendo.  As always Couric has a disarming way about her, and she doesn’t yell or get in people’s faces, but she’s never a lapdog. Rather, in the best journalistic tradition, she is a bulldog, which is proven in one scene.  A man asks if she is with the press; when she responds affirmatively, he tells her to step aside.  “I don’t have to step aside,” Couric says, evenly, as she keeps doing her job. 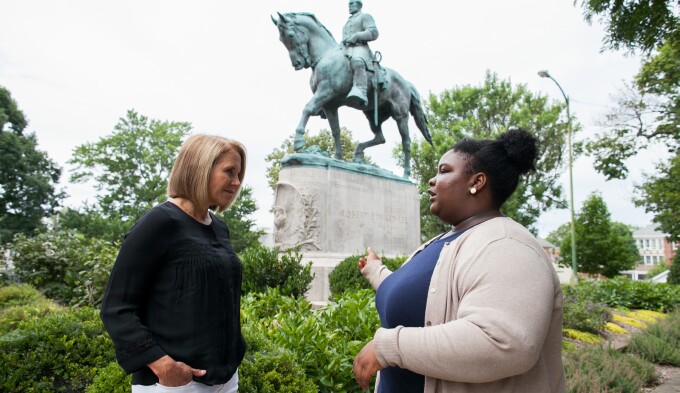 Couric listens to blacks explain why they want Confederate statues taken down and why some whites want them to remain.  She wades into controversies we think we know, and that’s where these six documentaries prove especially fascinating.

“A lot of these issues have really come to the forefront and come to a head as a result of the political climate,” Couric said at a press conference before the show launched.  “I think some of these issues have been simmering for a very long time, but they are in full relief as a result of political correctness becoming weaponized.  You know, I think women continuing to be marginalized, Muslims being crucified in the political rhetoric these days.  I think some of these issues have always existed, but I think our willingness to really confront them and talk about them and think about them is stronger today than it has been.”

As she traveled the country and spoke with hundreds of people Couric kept each issue in perspective.  Islam is the fastest growing religion in the world, with three million Muslims in America, yet only half of all Americans say they have ever met a Muslim.  Couric introduces viewers to families that are different to ours and yet precisely like ours: parents trying to provide for their children, trying to keep them healthy and safe.  She reminds us of the horrendous saga of the Barakat family of North Carolina, destroyed by Islamophobia when one of the family’s sons, his wife and her sister were fatally shot at point-blank range in their home by a neighbor.

Couric visits schools, work sites and homes.  Among those homes is Roseanne Barr’s macadamia nut farm in Hawaii.  Barr, who had voted for Presidents Obama and Trump, explains that she understands why people connect with Trump.

“I knew what it was like to work really hard and not get paid for it,” Barr says.

This episode on how white workers are filled with anxiety reminds viewers that whites will not be the majority in the United States by 2044.  In it Couric asks questions in factories across the rust belt.  Sometimes answers are found over a slice of cold pizza.  Couric asks a group of white men what the phrase “black lives matter” means to them.  Then their black colleague walks in and joins them and very calmly tells of how he grew up seeing the photos of black men lynched then burned.  When he is finished talking his co-workers explain how they now see the world differently.

Perhaps we didn't expect anything special to take place in a municipal break room.  Around that table, where countless meals have been reheated and scarfed down, a rare spark of enlightenment struck.  These men understood each other on a level that went deeper than their usual conversation about last night's game.  For the first time, the whites related to their black coworker.  It was a rare and moving moment of empathy.

It’s a fair bet that anyone who takes the time to watch will make the same claim.  Couric acknowledges as much.