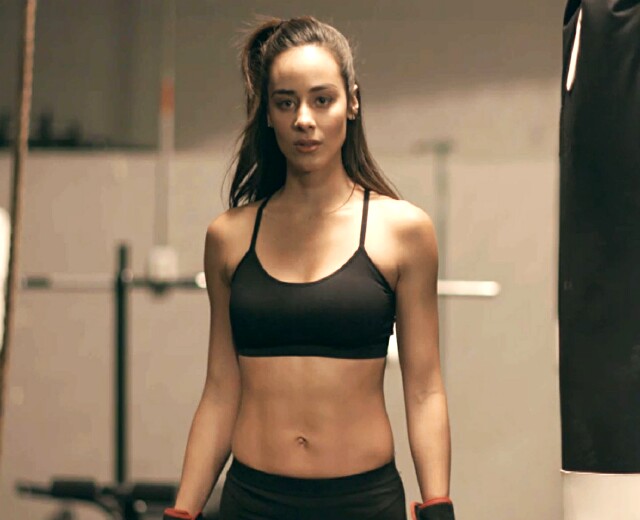 There has been a noticeable increase of late in inclusion, diversity and equality in the entertainment industry, particularly in casting, thanks in part to the #MeToo and #TimesUp movements.  Keeping on point, Univision has premiered the first of several new series this season to focus on strong, independent and powerful women:  The action-packed revenge thriller La Bella y Las Bestias (Beauty and the Beasts) which was one of the network’s most talked about upcoming series at its recent Upfront presentation in New York City.

Like traditional telenovelas, La Bella y Las Bestias’ initial character development takes place over several episodes, in this case nearly the entire first week.  It certainly helps that new episodes are broadcast every night, Monday through Friday, so viewers don’t have to wait an entire week for the next chapter in the story.

La Bella y Las Bestias follows Isabela León, a young woman living in Mexico who seeks revenge on the “beast” who killed her family and makes it her mission to eliminate any other “beast” who brings harm to the people around her.   The series starts with Isabela’s father Enrique, a high-ranking federal agent, busting a smuggling operation run by wealthy casino owner Armando Quintero.  Infuriated that he has lost millions, Quintero meets with his “council” of other powerful white-collar criminals and they order a hit on Enrique and his family.  Quintero’s son Juan Pablo overhears this and attempts to warn Enrique, but he fails, as the person he told to deliver the message is a crooked cop that works for Juan Pablo’s devious dad.

Isabela’s parents are killed and her friend is kidnapped after being mistaken for her.  Isabela sets out to confront Quintero at his casino in an attempt to find her friend and get answers, but instead finds Juan Pablo, who Quintero had locked away in the casino safe to punish him for his betrayal.  When Isabela asks Juan Pablo if he knew about his father’s intentions he denies knowing about any of them in front of the police, but later gives her video evidence of Quintero ordering the hit.

When Quintero is killed by a mysterious masked man, Isabela takes advantage of the chaos that follows and makes it her mission to identify the other members of his council and get her revenge on these other “beasts,” as her father called them.  Something interesting to note about said “beasts” is that each of the eight of them represents one of the seven deadly sins, with their boss encompassing all seven.  Not surprisingly he becomes Isabela’s greatest foe.  When a threat is made on her life, she is relocated to Los Angeles and sometime later makes a return to Mexico to save her city, taking down one “beast” at a time.

The female-led drama is reminiscent of Netflix’s Jessica Jones with a main character that refuses to be a damsel in distress and instead takes matters into her own hands to bring justice to those who place themselves above the law because of their wealth, status, notoriety and influence over the government and police.  Isabela uses her strength, martial arts abilities, skills of deception and sleuth to take down the “beasts” of her city.

The series stars Esmeralda Pimentel as Isabela León, Alejandro Avila as her father Enrique, Ari Telch as crime lord Armando Quintero and Osvaldo Benavides as his son, Juan Pablo.  Esmeralda’s performance as Isabela has incredible range (much like Krysten Ritter’s in Jessica Jones), with her first being an emotionally broken young woman amidst so much personal tragedy, and later transforming into a cunning, almost sinister force to be reckoned with that the “beasts” soon learn to fear.

Osvaldo Benavides as Juan Pablo, her friend, love interest and eventual crime-fighting partner also gives a fantastic performance, going from a rebellious and rather spiteful college kid to a man truly wanting to make a difference in the broken, corrupt society that his father created.  Ari Telch makes Quintero a true comic-book villain in all the best ways, summoning his henchmen with a snap of his fingers, feared by all and never taking no for an answer.

Upcoming female-driven dramas on Univision include Brujas Alamanecer (Witches at Dawn), which tackles the supernatural genre for the first time on the network, and Las Benditas (The Blessed), an action-drama centering on a group of women overcoming adversity in the face of tragedy.