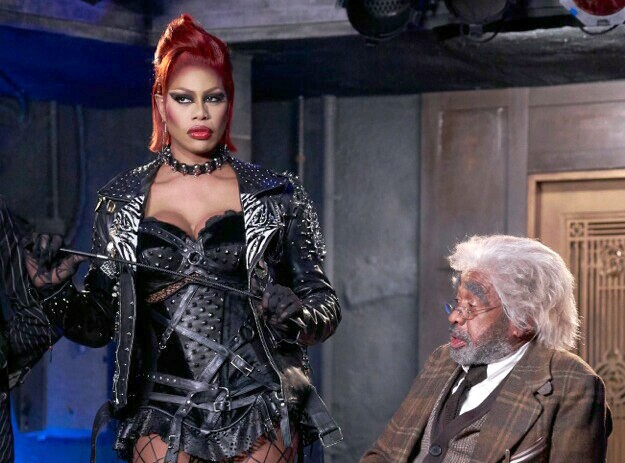 When it comes to wearing orange, transgender actress Laverne Cox has found the perfect way to accessorize it – with confidence and a successful career. But all accolades aside, the actress still faces casting challenges, even when it comes to playing a transvestite.

At 32 Cox has become a trailblazer for the transgender community, due largely to her role as Sophia Burset, a transgender woman imprisoned for credit-card fraud in Netflix’s Orange is the New Black. Her performances placed her in the “groundbreaking” category as the first openly transgender actress to become Emmy nominated for Outstanding Guest Actress in a Comedy Series. But these days it’s her upcoming role as Dr. Frank N. Furter in Fox’s reimagining of the 1975 cult classic The Rocky Horror Picture Show that has her excited -- and her naysayers speaking out.

Cox (pictured at top with co-star Ben Vereen) may be enthused about the production, but Rocky creator Richard O’Brien (who played Dr. Furter’s side-kick Riff Raff both on stage and in the original film) is less than enthusiastic about the project’s casting. While not singling out any one particular casting choice O’Brien recently told thisiscaberet.com: “I think that it is a project that is misconceived and [sadly for the players] badly cast. The producer and director seem to have missed the point entirely. I will say no more as I may be tempted to say too much.”

No stranger to adversity, Cox has this to offer the naysayers: “I'm a black trans woman from Mobile, Alabama, and I always feel like I have to prove myself. I think to be in a place where you have to prove yourself is a really wonderful thing. I understand I have to work really hard but at the end of the day I have to bring in my take on it. It’s collaboration between me, my director and the other actors. All these people that have been critical about it … At this level it’s something new I have to deal with but when it’s about the work it has to be about the work for me. Not everyone was fully happy about me playing the part -- or even us doing a remake because fans of this are so hard-core.”

Cox, however, was thrilled to receive the only endorsement she needed after landing the role. “Last Halloween I was honored to meet Sal Piro, president of the Rocky Horror Fan Club for the last 39 years,” she gushed. “When he found out I was playing Dr. Frank ‘N’ Furter he was so excited and thought I was the perfect person! That meant everything, having the fan club president's approval.”

The production’s Sweet Transvestite, Dr. Frank N. Furter (originated on stage then immortalized on screen by Tim Curry), is a role the actress admits to falling in love with while in college, although she’s never attended one of the films infamous midnight screenings. “Some friends in college said, ‘You have to watch The Rocky Horror Picture Show,’” Cox recalled. “So we did, in the dorm room. They were into the audience participation and started screaming at the TV. I was like, ‘Okay …’ Eventually I got the soundtrack, learned all the songs and became obsessed with them, particularly Don't Dream It Be It. That song became a personal mantra for me.

“Tim Curry and his portrayal of Dr. Frank N. Furter shaped a lot of early Laverne, it was so moving for me,” she continued. “It feels like a full circle moment to be able to do it. I'm excited about the entire cast, but when I heard that Tim had been announced as the narrator, I cried! I could cry again thinking about it.”

Cox admits it was OITNB that changed her life in so many ways and although her character dominated the show’s first three seasons, Sophia’s diminished presence in Season 4 still provided the actress with work to be proud of. “In Season 4, all that I have come to understand that [Sophia] is remained, but her circumstances have changed so she has to react differently,” Cox explained. “What was really fun about it is that it was completely different [from what I’ve done before] -- and I have a little ADD, so I got to do different things. I never thought that I would get to play a character this complicated. I love how multidimensional she is, so I get to bring all of myself to her and that's wonderful.”

Cox can be seen in Season 4 of Orange is the New Black currently streaming on Netflix; The Rocky Horror Picture Show on Fox in October and CBS’s upcoming Doubt alongside Katherine Heigl in the fall.