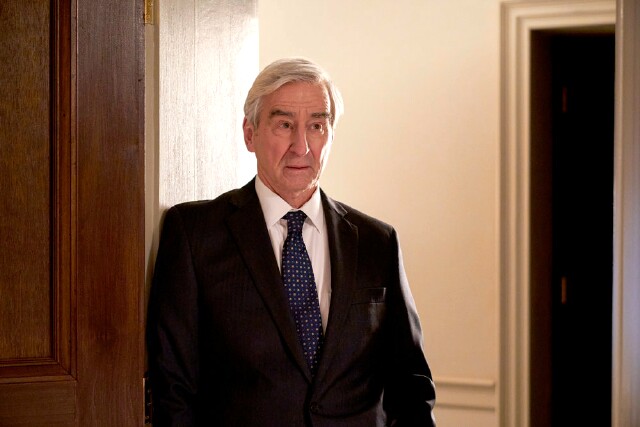 Dick Wolf was quoted during a recent NBC virtual press conference about the imminent return (after an 11-year absence) of the Law & Order mothership to the network's schedule. Unfortunately, he wasn't able to attend, but another panelist -- long-time L&O leading man Sam Waterston -- remarked that, to his knowledge, Wolf had "never stopped talking" about bringing the show back. "One of the reasons that we're back is because of [Wolf's] complete conviction that it was a terrible mistake to stop in the first place," Waterson said. "We stopped making the shows, but the audience never stopped watching them." That's certainly true -- Law & Order reruns are as ubiquitous as those of I Love Lucy.

New episodes ofLaw & Order begin on February 24. Let's call it a "return" (like those of ABC's Roseanne, CBS' Murphy Brown, TNT's Dallas, Peacock's Saved by the Bell and others too numerous to mention) rather than a "remake," a "revival," a "reboot" or whatever "r" word might be applied in this era of content "regurgitation" (which is what so much of it ends up being like). I would argue that, unlike most of the others, this particular "return" makes perfect sense from both the creative and business perspective. The history of the franchise has shown us that it could be and should be an evergreen. There is a proven renewable audience for it that extends beyond our insatiable all-American lust for crime shows.

Wolf couldn't have set it better had he said it to us himself: Thirty-two years after its 1990 premiere, the L&O franchise is as popular as ever. There are old and new fans to serve, a franchise to be fortified and much money to be made. There is also a cultural archive to maintain. I doubt anyone will ever do this, but a comprehensive review of every L&O episode ever filmed (a whopping 456 and counting, according to NBC), along with most episodes of spin-off L&O: SVU, will prove that they are an invaluable collective time capsule that reflects the turmoil, tone and trouble within our society in any given year. Everyone involved with the show has asserted from the very beginning that much of its storytelling is "ripped from the headlines." (Of course, way back in 1990 headlines still mattered, as everyone was still reading one or more responsibly reported daily newspapers as a primary source of reliable information.) What a resource it is for sociologists. On top of that, and as an added value, Law & Order has documented the beginning, middle and sadly sometimes the end of many an acting career, providing as it always has a showcase for all of New York's finest actors, many of them Broadway's best. In tandem with SVU it has also been an invaluable first credit for hundreds of actors who were just starting out.

It may make all the sense in the world for L&O to return, but by contrast, I would argue that most of the other "r" shows didn't need to be brought back at all. Listing and remarking on each of them would fill multiple columns -- and that fact alone indicates Hollywood is indeed scraping for ideas, choosing to increasingly and lazily rely on existing IP rather than strive to provide something new. I might be thinking differently about this had there been any "r" shows that in any way enhanced beloved franchises rather than break them down.

Indeed, the only "r" show I can think of that has engaged me all over again in the way that it reflects the reality of its time is ABC's The Conners. The original show, Roseanne, was an undisputed powerhouse (at least until its final season, a stinker by any account, and one dismissed at the last as an extended fantasy). Few American television comedies have so accurately reflected the lives of the working poor with more self-deprecating humor and punishing insight. (I would put The Honeymooners and Good Times on that very short list.)

Roseanne was a show for the late-Eighties and early-Nineties, when the American economy was once again circling the drain and another "r" word, "recession," was tearing the country apart. When the cast returned intact 22 years later, Roseanne had lost none of its power to make people laugh while reflecting the problems of everyday American life. Then leading lady Roseanne Barr did what she did on Twitter one night and the show (which was once again a hit) was hastily cancelled, only to be immediately revived as The Conners with its former title character eliminated. The unthinkable happened -- Roseanne Conner was killed off -- and though it lost its center, the extended Conner family has continued to deliver. (Plus, it has provided Katey Sagal and Candice Bergen with recurring roles, so how can it not deserve praise?)

If The Conners is a fine example of an "r" show exceeding expectations, then the recent continuation of HBO's Sex and the City as HBO Max's And Just Like That is the opposite. It proved my point that most of them should have remained where they were -- in the distant past. (In a previous column, the "r" word I chose to define AJLT with was "reflux.") It seemed as if virtually everything about that show turned out wrong, but to end on a positive note, the one element of the narrative that felt right (rather than forced, or just plain stupid) was Carrie's budding friendship with Lisette, the young woman who lives in the apartment below her studio, who was clearly going through all the same dating drama that Carrie and her friends endured when they were her age decades ago.

If And Just Like That has a second season, that's what it should be about … the old befriending and supporting the young (and learning even more about themselves in the process). That's how life goes, right? It's all about growing up while growing old, and it's the storytelling path all "r" shows should follow. I trust Wolf and his team are already on it.

Law & Order will be telecast Thursday at 8 p.m. on NBC.