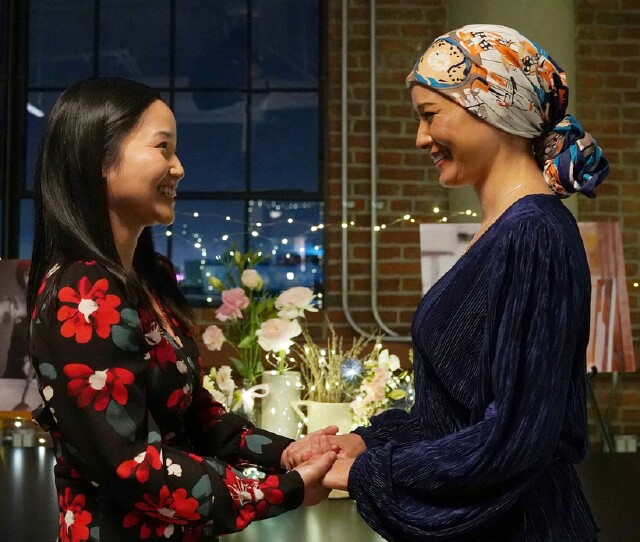 Lifetime is raising awareness of breast cancer this weekend with the premiere of List of a Lifetime starring Kelly Hu, Sylvia Kwan and Shannen Doherty, who was also entrusted to create special content as part of the Stop Breast Cancer for Life campaign that follows the film. Directed by Roxy Shih, List follows the touching story of Brenda Lee (Hu), who after being diagnosed with breast cancer searches for the daughter she put up for adoption as a baby to inform her that she might also be carrying the same cancer-causing gene. After locating Talia (Kwan), and sharing her devasting news, the two form a fast bond when Talia convinces her birth mother to create a bucket list. It's through making that list that Brenda discovers a whole new reason to live, while Talia discovers the woman she wasn't sure she would ever come to know.

For Doherty (pictured below), who stars as Talia's adoptive mother Diana, the film broke new career boundaries. Her personal journey of battling breast cancer has been well-documented over the years, yet she has shied away from projects dealing with the subject. "I think this is the first acting thing I've done about cancer," she revealed while recently promoting the film. "I've been pretty careful about bringing the acting into that world. But when I read the script and found out who all was involved, I felt like I had to be a part of it, and I was super honored to be.

"Part of it [was] the sisterhood that made this film even more special," she continued. "Yes, the topic is special, and everybody's performances are special, but the sisterhood behind the scenes sort of blows everything else out of the water for me. I feel like I have a responsibility in my more public life, which I separate from my acting life, to talk about cancer and to perhaps educate people to let them know that people with stage four [cancer] are very much alive, very active and more than capable of working, and to just sort of raise money and spread awareness. In my close-knit quarters, it doesn't really come up, and my husband says you would never know that I had cancer. I don't ever complain or really talk about it. It's just a part of life at this point."

"I just have to say this was such a sisterhood," concurred Hu (pictured at top, left, with Kwan). "Seriously, this project was really the best project I have ever been on. Everyone was absolutely amazing, and the bonding that happened during this project was like no other."

For Hu, who is quite remarkable in the film and carries much of its emotional gravitas, the role afforded her something different. "It was a different kind of character for me," she shared. "I never get to play these kinds of characters. [People] see me as the martial arts girl kicking butt, but kicking cancer's ass, I think, is the hardest role that I've had to take on so far. It was a role that I had the most difficulty preparing for, and it had the biggest payoff at the end. It was absolutely amazing and I'm so thankful to be able to do something like this."

Concerning the special content Doherty (pictured below) was entrusted to create for the film's premiere, she didn't have to juggle her acting and directing caps. "The special content [that follows the film] was broached to me later," she revealed. "[I was asked] if I would like to direct it? The response was, 'Absolutely, as long as this amazing group of women are comfortable with me directing them.' They were, and they were amazing. Every single one was easy to direct, even Roxy, [our] director on the film. "What's amazing about Lifetime is they really support women," she added. "They do support social issues, from this movie about breast cancer to my other [recent] movie (Dying to Belong, premiering October 8) that was about bullying and the pressure that society can put on young people today. Working with a company like Lifetime, and a studio like Lifetime, you feel very supported, very nurtured and, more importantly, you feel heard. I think women all around the world who tune in also feel heard. Their movies connect with people at the end of the day, and I couldn't be more thrilled to be a part of this family."

As for real-life bucket lists, Doherty is staying well-clear. "I think a bucket list is odd in my particular situation," she offered in closing. "It means that I'm sort of trying to check things off before my time runs out. So, there's no bucket list because I'm going to be the longest living person with cancer. I guess, if I had to say one, it would just be living --that's the only thing on my list at this point."

List of a Lifetime will be telecast on October 10 at 8 p.m. on Lifetime.