Lifetime's "Secrets of a Marine’s Wife" Is a Compassionate, Cautionary Tale 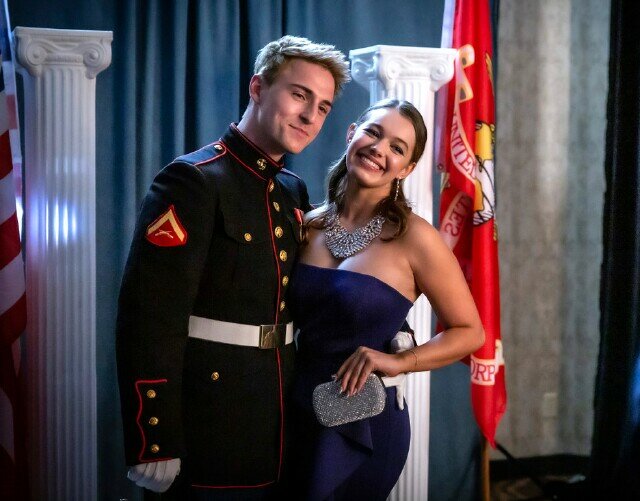 Lust, betrayal and a senseless murder form the backdrop to the new Lifetime movie Secrets of a Marine's Wife, the latest entry in the network's Summer of Secrets programming event.

Sadie Calvano (pictured at top, right) and Evan Roderick (top left) star as Erin and Jon Corwin, newlyweds who move to 29 Palms, CA, to begin their new life at a Marine training base. But when Erin becomes enamored with Jon's Marine buddy Christopher Lee (Tom Stevens), her would-be idyllic existence is thrown into turmoil. As flirting turns into an affair, things get worse after Christopher’s wife uncovers the truth about their relationship. Rocked by the news of his wife affair, Jon’s life takes an unexpected turn when Erin goes missing during a trip to nearby Joshua Tree National Park, and he finds himself the prime suspect in her disappearance.

"The thing I would really like viewers to take away from this movie is that this isn't a story that questions Erin’s sexual choices," Calvano recently said while promoting the movie. "This isn’t a story that talks about how because she had an affair, she got murdered. This is a story about complex relationships; about a young girl who was looking for love and connection and was going through a really tough time in her life and was looking for support. I really hope people can see the story of love and seeking, can fall in love with her, and wonder."

"Speaking from Jon’s perspective, it’s a story about forgiveness," Roderick added. "Because these characters are so young, I guess, there is such an expectation on this relationship to work, so I think it was important to keep Erin in a light that she was a really good person and we had to honor her story. I hope people can see that when they see the movie."

"[Erin and Jon] had a relationship that was kind of too young," offered Stevens, who plays the third party in this true-life love triangle. "[These] people got married very early and what we were telling is the story of what Chris and Erin found was almost like an intimacy they hadn't really experienced before. It just so happened that she chose to go with somebody that had some serious issues."

According to the film's executive producer Judith Verno, one thing the movie set out to do was never pass judgment on Erin. "What's important is nobody should pay for their mistake with their life," she declared. "That's the message here." She added that it is important to find true-life stories such as this one that are relatable at their core, but can also serve as cautionary tales, especially for a younger generation.

"I think that's important to tap into for Lifetime," Verno continued. "Sadie, Tom and Evan all alluded that Erin is a really good person. To be able to message that you can have flaws, make mistakes, be young and not wind up dead wind was important to me. I [enjoy] the true crime genre, and the setting of this, as I don't think there's been a lot of true crime [set] in a military environment. But most of all, I really love working with young people. Our cast is amazing and to be able to pay tribute to Erin, who is a victim in the truest sense, and have a teachable moment for viewers while entertaining [them], is a great story to be able to have the privilege to tell."

Audiences were first introduced to Calvano via her role as Anna Faris' daughter Violet Plunkett in CBS' long-running and acclaimed series Mom. After watching her mature in her last series Why Women Kill (Paramount +), Secrets of a Marine’s Wife marks her first adult role for Lifetime. "Mom was such a huge part of my life and of my personhood," she said of the series that introduced her to audiences. "I was kid, fifteen, when I started on Mom, so it shaped such a big part of my life and obviously of my career.

"But this is a really exciting project because it's not like Violet at all," she continued. "[Along with] Why Women Kill, this is one of the first roles where I really got to play a woman and a person who's not just an angry, bratty teenager. She has romantic, complex relationships, and you really get to see a different side of me in this project."

Calvano told MediaVillage she knew of Erin’s story before accepting the role. "I must confess in my day-to-day life I am a bit of a crime junkie," she explained. "I do watch an unhealthy amount of murder shows, so I did know about this story. I grew up in LA. My boyfriend's mom lives in Palm Springs, and this was a huge story in that area, so I was familiar with the case, and I remembered reading about it when it happened."