LMN's Vivica A. Fox on Building Her "Dream Squad" for Sustainable Success 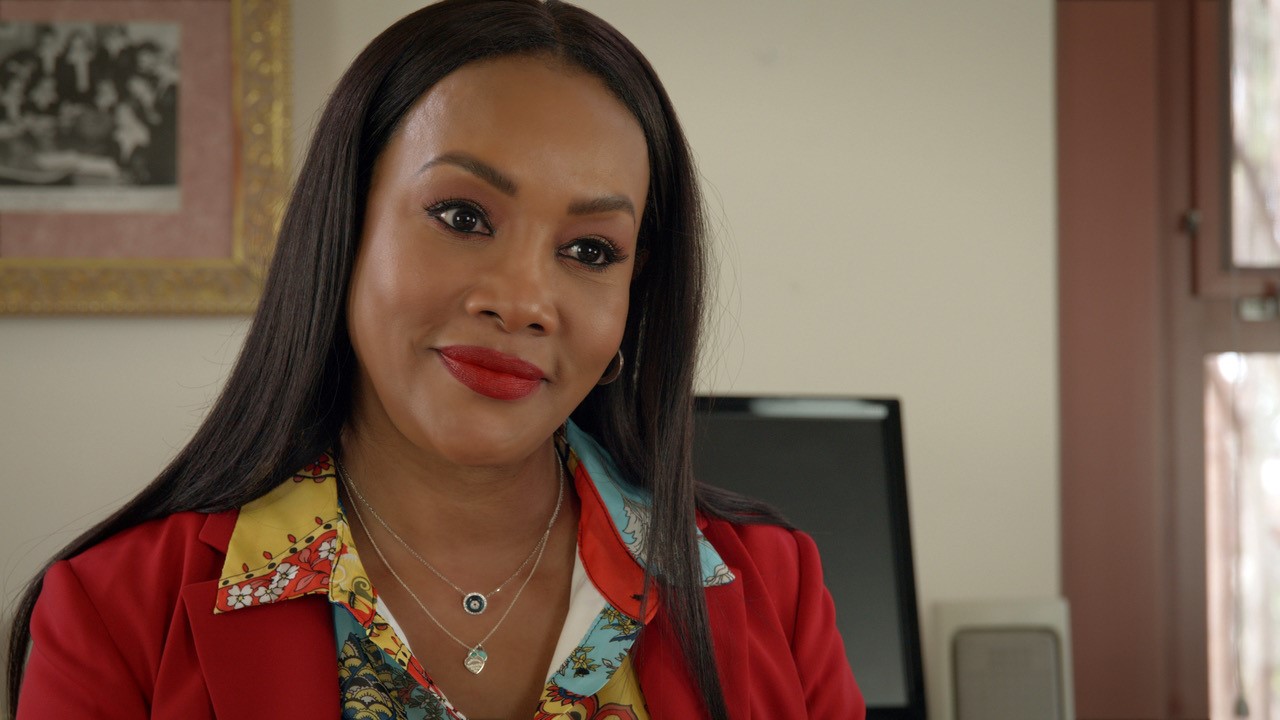 Lifetime Movie Network's The Wrong franchise continues to be 'oh so right' for its star and executive producer Vivica A. Fox. Fox recently celebrated the release of The Wrong Wedding Planner and this Friday adds another credit to her exhaustive list with The Wrong Stepfather, which also marks her 18th film in the series, in which Fox has been afforded a variety of characters.The Wrong Stepfather is telecast Friday, July 31 at 8pm on LMN.

Considered to be one of the hardest working women in Hollywood, Fox's message of "do the work", is advice the ever-youthful businesswoman, entrepreneur, author, actor and now podcaster is happy to share. "My advice to anyone would be to build a dream squad," she shared in a MediaVillage exclusive interview. "Get a team of people behind you that see opportunities you might not have even dreamed of. My publicist BJ Coleman turned me into an author when he said, 'It's time for you to do a book!' I replied, 'What? Another job?' He said, 'You're a woman in your 50s, having an amazing career resurgence, and it's time for you to share the secrets of your success; you're an author, an executive producer, you're working more than ever, you look great, share the secrets of your trials and tribulations'.

"My business partner Lita Richardson suggested The Vivica A. Fox Hair Collection," she added. "Now we're going on celebrating a decade of that. Financially it's been so successful for me, but I do give back by helping women who are going through chemotherapy to help them feel good about themselves. My agent first suggested being a producer when he said, 'They keep coming back for you, you need to be producing these'. So build a team of people that are going to work with you because we all want success. The younger generation is so used to swiping and having things happen instantly, so one thing I always pass on to young actors is, 'You have to do the work'. You might want to take a shortcut and become a YouTube sensation, but that's rare. When you're talking about building a career, do the work."

And work she has, steadily for the last 32 years, and continues to do so despite the current Coronavirus pandemic. "At first, when everything closed, I was a little pissed off," she revealed. "I won't lie, because I had two events canceled, the Empire finale, and a trip to Sacramento to watch my son's friend play his third state basketball championship. I had to pump the brakes, but I tried to look at the positive. It was time to take a breather as I'd been going a hundred miles an hour. Well, that was cute for about two or three weeks when I could eat McDonald's and drink McFlurry's, then I passed a mirror and thought, 'Uh, oh, we are not getting Corona-fluffy'. So I started a podcast called Hustling with Vivica A. Fox and doing interviews from my new home, as my old one sold right as we shut down. I got used to doing zoom interviews while promoting a movie, and have another streaming show called Cocktails with Queens that I do every week, so it was a blessing at first but then went from zero to 100 and I'm busier than ever!"

Concerning The Wrong franchise, Fox tells me no occupation is off-limits. "I spoke with Billy Bush the other day and he asked to be in one of them which gave me a great idea," she laughed. "He could be The Wrong Reporter! He laughed about it and the good thing about him is he went through a crazy time, but it wasn't his fault he interviewed… And that's all I'm saying. We have The Wrong Realtor coming up, so there are a couple of more Wrongs to explore."

The Wrong Stepfather sees Vivica as Ellen, a school principal, whose co-worker friend Karen (Krista Allen) (pictured below with Fox) about to make a huge mistake by marrying Craig (Corin Nemec), her daughter's college admission adviser. The role is one Fox never imagined getting the opportunity to do. "I was excited to play a principal," she said. "People often ask what I like about doing these and it's that I like to cast myself in roles that I wouldn't normally be cast in, like this one. I also got to be a little more emotionally attached in this [story] and not like the detective who [just] comes in to lay down the law. You could see a friendship amongst the two women and that's always nice to see. 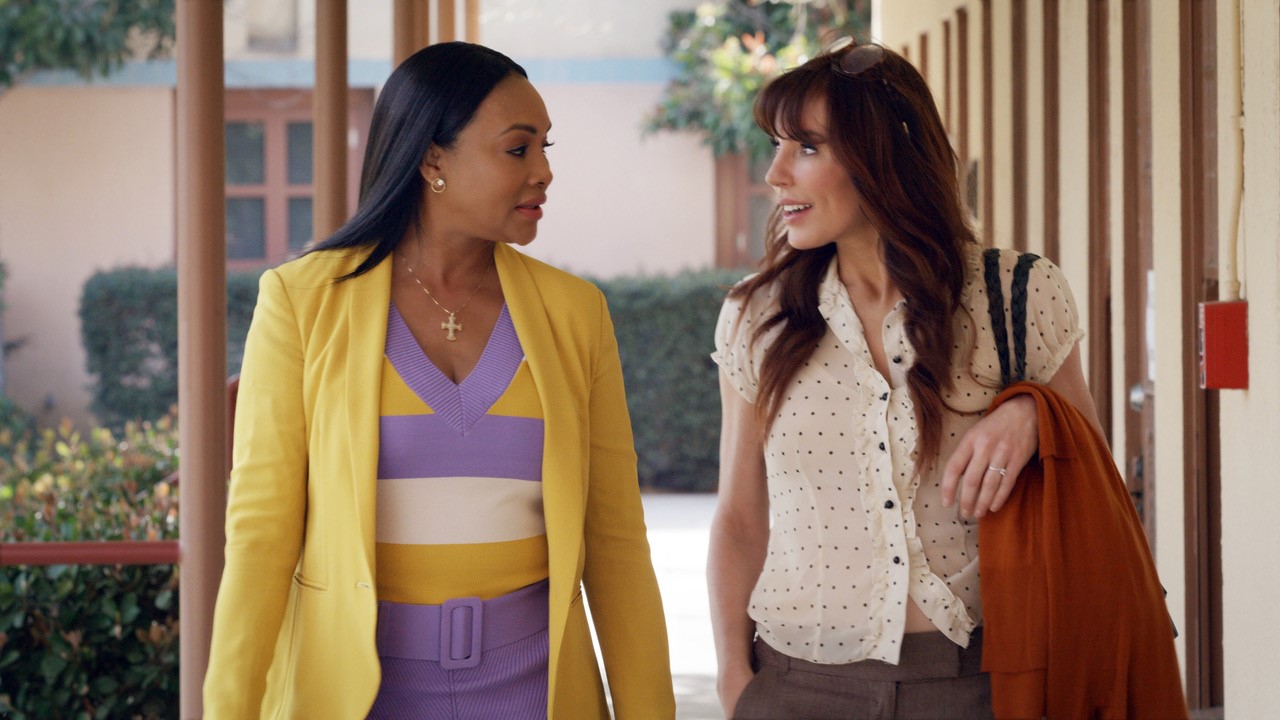 "Another thing I like about The Wrong franchise is that we always tackle current topics," she continued. "It's not like, 'That would never happen'. I didn't think about the whole college admissions thing and a mother being conned, but it does show the younger generation that there are no shortcuts to success. Do the work because it can come back and haunt you. I never thought I'd witness the day of a Lori Loughlin being in that predicament. But she really thought she was doing the right thing, and the biggest lesson is -- money doesn't always buy happiness."

As she looks forward to Hollywood reopening, Fox, like everyone, has been observing the current changes in our world and admits to liking where things are headed. "It started with the #MeToo movement," she said. "Now with the recent death of George Floyd and the pandemic, I feel like the world is in transition for us to become better people. To respect each other; respect male and female relationships, and make sure there's pay equality. Now we're transitioning to making sure that each nationality is treated with respect and it's a needed change. Change is sometimes hard for people and I think that's what you're seeing.

"One thing I'm glad about more than anything is that cameras are everywhere because the camera doesn't lie," she added in closing. "I welcome that change because I always try to treat people with love and respect and try to be fair. I'm glad our babies can embrace different nationalities, see a woman in power, or people of a different nationality in power, it's what the world needs."