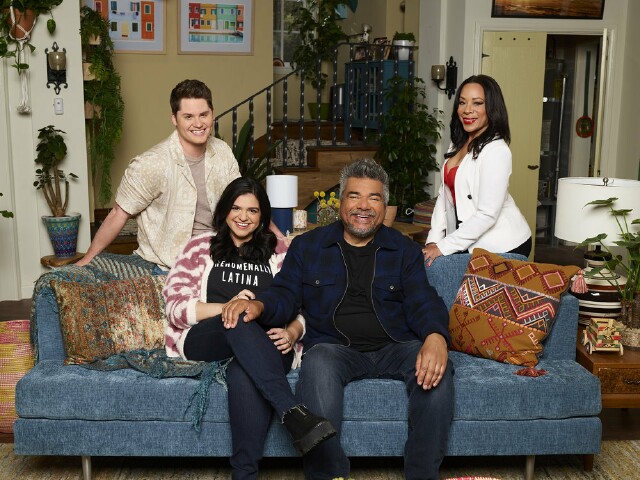 Fifteen years since the end of his groundbreaking sitcom George Lopez, which spearheaded representation for Latine families before #RepresentationMatters or Twitter even existed, the man is back on the small screen in Lopez vs. Lopez, a new series in which he stars alongside his daughter Mayan Lopez.

When NBC announced a pilot order and subsequent series pickup for Lopez vs. Lopez, I could not contain my excitement. As a '90s kid, I grew up watching George Lopez, or The George Lopez Show as we often referred to it, during my formative years leading up to high school. I was about the same age as George’s onscreen son Max and saw my own hilarious and over-the-top family represented throughout the show. Lopez was among the few Latinos in television and comedy to hit the mainstream at a time when we were often sidelined to supporting roles, or roles that were stereotypical and did not show Latines in the best light.

Lopez vs. Lopez is based on the once-estranged relationship between the real-life father-daughter duo. George, a working-class divorcee, moves in with his Gen Z daughter Mayan, and the two try to rekindle their dysfunctional relationship. As with any family, laughter and drama ensue as the two constantly butt heads about household issues and their generational differences, the latter a recently popular trend with shows like Hacks and Only Murders In the Building.

While the premise is a tale as old as time, kids educating their parents in multigenerational households is an all-too-familiar concept among Hispanics. Young Millennials and Gen Zers are constantly trying to break through their parents' "old school" mentalities, outdated and now insensitive terminology, and dogmatic points of view, whether it's about politics, identity or pop culture.

We soon find out that George's life was heavily impacted by the pandemic. He finds himself in a financial bind but is too proud to admit as much to his daughter, and instead confides in his ex-wife Rosie, delightfully played by Orange Is the New Black alum Selenis Leyva.

Matt Shively plays Quintin, Mayan's partner and the father of her son Chance. Quintin is not-so-secretly scared of George but is fine with him moving in because he knows how much repairing their relationship means for both of them. (Matt Shively is pictured at top with Mayan Lopez, George Lopez and Selenis Leyva.)

Six-year-old Brice Gonzalez, a TikTok star in his own right with over 15 million followers, co-stars as Mayan's son Chance, who is just as quick-witted and hilarious as his grandpa. Gonzalez rose to social media fame when he and his father Randy started posting lip syncs and comedy videos on TikTok. Although they were always supporters and activists for cancer awareness, the two began using their platform to provide levity for current patients and survivors after Randy was diagnosed with colon cancer.

Social media plays a big part in the series as Mayan uses TikTok to share short, funny and empowering videos for "women with daddy issues," as she tells George after he catches her twerking upside down for a video. While platforms like TikTok are at first glance seen as a place to share versions of the latest dance or another meme, there are also tens of thousands of accounts dedicated to activism, education and raising awareness on culture, current events and social issues.

The opening scenes of the series, and pivotal moments throughout, are told via TikToks, which is an incredibly effective way to set up the world of the show rather than via excessive exposition as pilots usually rely upon.

With showrunner Debby Wolfe (One Day At a Time; Love, Victor) leading the charge, and veteran sitcom director Kelly Park (The Neighborhood, Call Me Kat) helming the series pilot, the laughs are quick and constant, and the direction harkens back to classic family sitcoms like All In the Family and Roseanne. It's expected for Mayan and George to have chemistry, but the Lopez family and friends comprise a tight-knit unit with a fantastic dynamic of tender moments and quippy one-liners throughout.

NBC recently shared a slate of exciting guest stars that will join the cast this season, including a mini George Lopez cast reunion, with George's former co-stars Constance Marie, Belita Moreno, Valente Rodriguez and Luis Armand Garcia appearing in the series' first Christmas episode. Comedy legend Cheech Marin and EGOT Rita Moreno will guest star in an episode slated for January 2023, where Marin will play a curandero, a shaman or healer, while Moreno will portray George's late grandmother, who appears to him as a spirit.