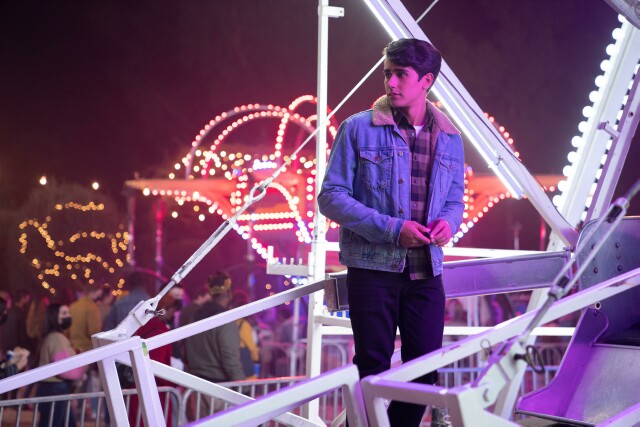 Hulu's acclaimed teen dramedy Love, Victor is back for its third and final season, premiering once again amidst Pride Month celebrations. It is certain to be an emotional ride. The critically acclaimed teen dramedy is a spin-off of the 2018 film Love, Simon and follows the coming out journey of Victor Salazar (Michael Cimino), a Latino teen. Showrunners and executive producers Isaac Aptaker, Elizabeth Berger and Brian Tanen sat down with MediaVillage to discuss the upcoming farewell season and what audiences can expect in the final chapter of the series.

Love, Victor was originally picked up to stream on the then-fairly new Disney+, but due to its more mature themes regarding sexual exploration, the streamer moved it over to Hulu prior to its premiere. "As the show was taking shape, very quickly it was decided that we belonged on Hulu," Berger shared. "We got really lucky in that we got moved to the absolute perfect platform for our show really early on." Disney also recently announced that the third season will be made available to watch on Disney+ in addition to Hulu in the United States. "To know that we'll now be on Disney+ and that our show will reach a wide, wide audience, it's in our minds that it's the best of both worlds and everything worked out just as it was supposed to."

When asked about what they're most looking forward to for audiences to see in the farewell season, Aptaker spoke on how the series was able to truly finish out its story and not end on an unresolved cliffhanger, a method the show used at the end of the first two seasons to leave audiences wanting more. "I'm really proud of the ending," he said. "I hope that people find it really satisfying. It has a great full circle quality to it and touches back to the movie that started it all." Aptaker and Berger also wrote the screenplay for Love, Simon, the Greg Berlanti-directed film that inspired the spin-off series and featured an iconic rom-com moment on a carnival ferris wheel, which is referenced and plays a pivotal role in the season three finale of Love, Victor.

"We feel so fortunate that we had such great partners that allowed us to end the show very intentionally and the way we wanted to," Aptaker added. "Getting to land the plane on our terms was such a gift."

Tanen revealed that he is most looking forward to continuing the love story of Lake and Lucy, characters respectively played by Bebe Wood and Ava Capri. "It tells a different type of queer relationship between two young women that's way less about putting a label to it," he asserted. "It's this modern thing where kids are exploring and not making it so much about identity, which was Victor's journey. I think it speaks to how Love, Victor is not trying to say, 'This is what a gay storyline is.' There are a thousand different stories out there and this is just the tip of the iceberg!"

When asked about what she hopes audiences take away from the series by the end, Berger explained, "We hope that people share our point of view. Everyone deserves to feel so much love. Everyone should feel valued and worthy. There is space for you. Your people are out there and even if you haven't found them yet, you're going to … and you can go on to live a big, joyful, beautiful life because that is what everyone deserves, regardless of orientation."

The three also recalled what their lives were like at the ages of the characters on the show, the very formative high school years, and what they would tell their younger selves if they had the chance. Tanen reflected on how around that age, he was still closeted. "I had an inkling that I was gay but hadn't figured it out or put a name to it, so the idea that I would, as an adult, not only want to but race to work on a show like this would've been so alien to me at that time," he said. "Being gay has been a really joyful part of my life that has enriched every aspect of my relationships and my career. Everything has been better, not worse, which is what I was afraid of because I'm gay."

"I'd tell myself to relax on every single level," Berger said with a laugh. "I remember literally making myself faint from the stress of choosing which of two high schools I go to. There's this point when you're young where you just can't imagine that you'll ever figure anything out. Who to love, what to do with your life -- you spend a lot of time worrying and stressing. Then eventually life goes on and you figure out who you are and what you want, and it all happens in this very natural, beautiful way. I would go back and tell myself to take a breath and relax."

"I remember how important TV was to me back then as a teenager with shows like Boys Meets World, Everwood and Dawson's Creek," Aptaker recalled. "To get to make that type of show for that audience now, especially for a chunk of the population who has been underrepresented and hasn't had their stories told in this format is really special. I'm so grateful we got to do it."

The third and final season of Love, Victor premieres June 15th on Hulu and Disney+.