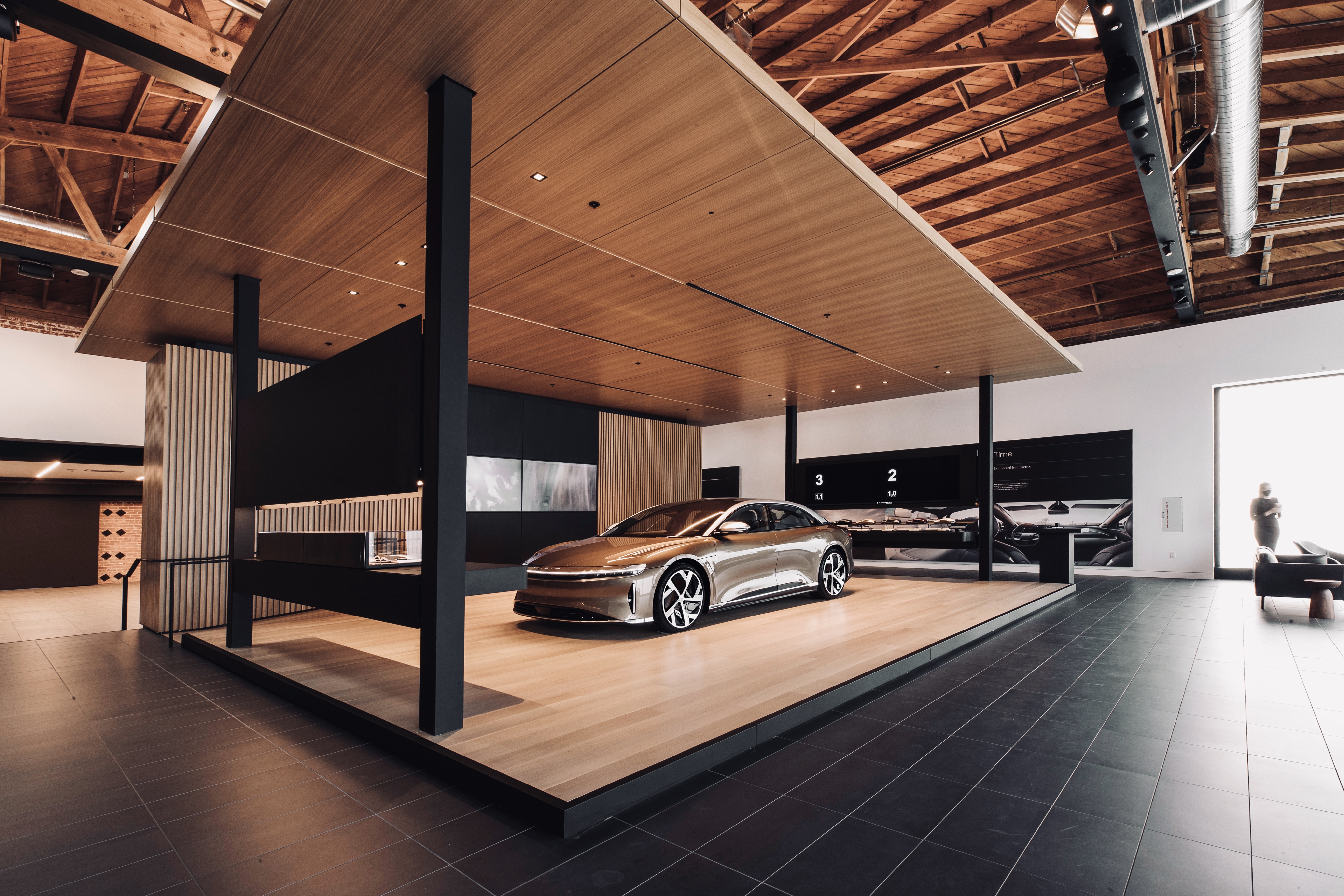 On October 2, Lucid Motors opened a Beverly Hills, California "studio" with a service center attached, ahead of its plan to launch next spring the stunning Lucid Air, a very high-performance luxury sedan. To find customers for what is, after all, a new and unfamiliar brand, Lucid is planning to launch 20 such retail centers by the end of next year—in upmarket locations including New York (the meatpacking district), Miami, West Palm Beach, Boston, the D.C. metro area, and other locations around California (which has half of the country's EV [electric vehicle] sales).

Lucid is in the process of setting up similar home bases in Europe, and the Middle East is also in the plans. "We want places in affluent areas that get a lot of foot traffic," said Derek Jenkins, Lucid's vice president of design in an exclusive interview.

The plan makes sense because this is not an inexpensive car. The launch model is known as the Dream Edition, and it's designed to blow off Tesla, with 1,080 horsepower, a zero to 60 time of 2.5 seconds, the quarter mile in 9.9 seconds, and 508 miles of range. Buyers will get all that in an attractive package designed ground-up to be an EV, resulting in fairly small size but epic storage and rear legroom. But they'll pay for the privilege, $169,000. (The forthcoming base car will be comparatively affordable, at $77,400 before the $7,500 federal tax credit.)

MediaVillage talked to Jenkins about rollout marketing plans for the Air. "We're striving to make our studios an immersive experience," Jenkins said. "People want to get really involved in the car." Tesla initially took its cues from the Apple Stores, with a low-key strategy designed to acquaint consumers with the brand. Actually buying the car would mostly happen online, a trend that has been accelerated by COVID-19 even for mainstream brands. 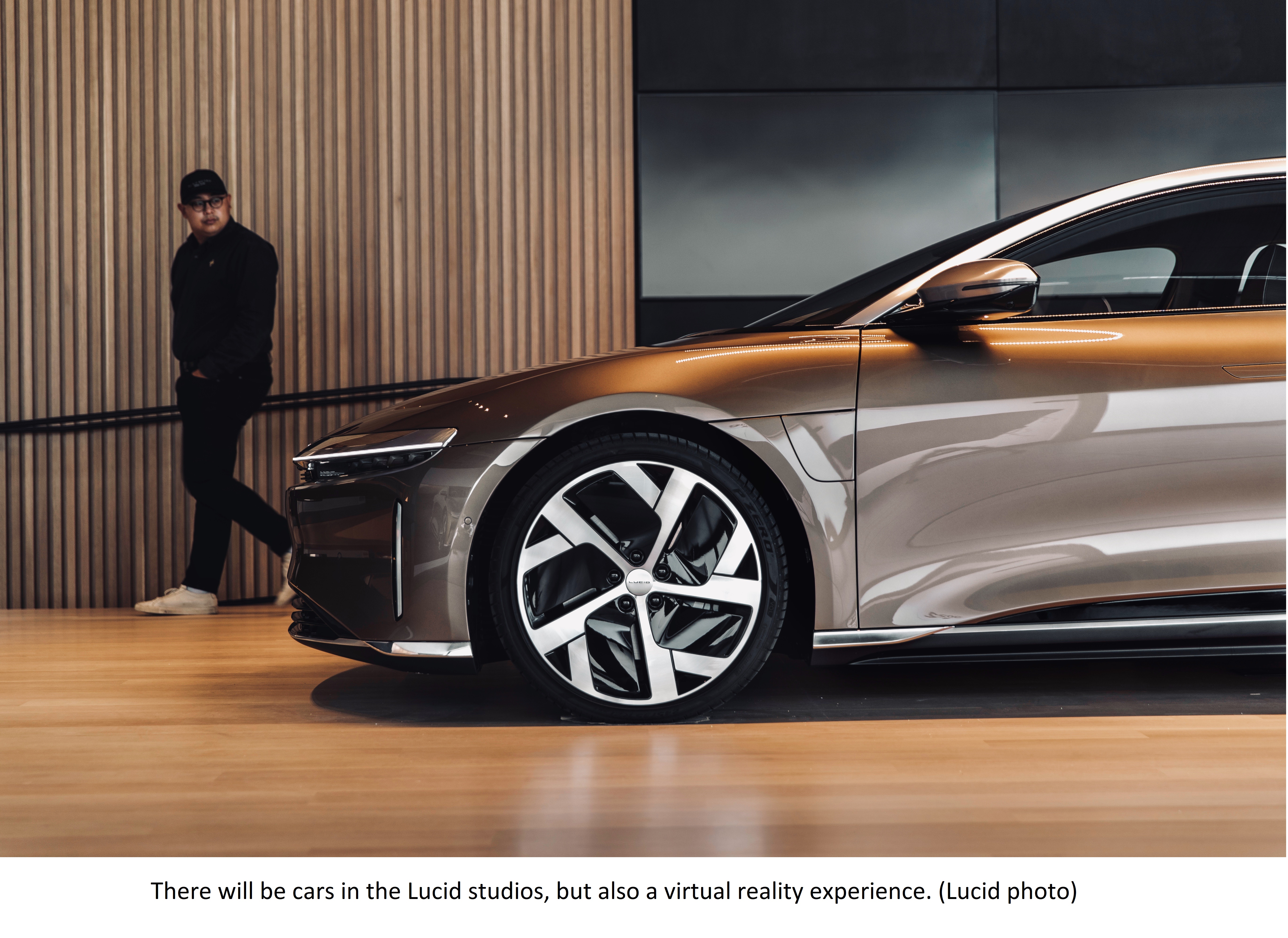 This strategy was somewhat born of necessity, because Tesla was intent on owning its stores, not using the franchise model that has made generations of car dealers rich. Those dealers have heavily pushed back against Tesla, resulting in sales bans in some states.

Lucid is also controlling the sales channels, and Jenkins says visitors will have a "low-pressure experience" (another Apple innovation). There will be cars on display, and also some of their key parts, including the battery pack and the compact motor/inverter/transmission/differential. There are also displays of material/paint selections, and what Jenkins describes as "a lot of immersive content on video screens."

And then there's virtual reality. Customers will be able to get into a model of the Air interior, don 4K VR goggles, see the car in many different iterations, and be "transported" to a variety of destinations—including the beach in Monterey. From home, a similar immersion is available through Lucid Studio Live, a cloud-based experience powered by ZeroLight's Concierge product.

"We're after a new type of luxury," Jenkins said, "very high-tech, with an awesome digital experience and an underlying sustainability message. It's not about abundance and opulence and showing off. We refer to it as 'post-luxury.' The modern affluent consumer is conscious of how excessive and overly privileged they might appear to be. They want a car that is more experiential, with cutting-edge digital technology and a green footprint."

The company sees its customer base as having "$100,000 to no limit" annual income. "A lot of our customers are already EV buyers," Jenkins said. "They already have the affinity and want something that's not on the road today. But the bigger opportunity is folks who have not yet bought EVs, and we're seeing a lot of interest from them. After all, 98 percent of the market is still buying internal-combustion cars."

Lucid declined to say how many advance orders it has for the Air. Working with the Marshall Strategy branding agency and the Tolleson creative agency, Lucid came up with a statement that dovetails with the aggressive customization that's possible with the Air. "Those not bound by convention are free to define their own experience."

"Advertising is in the works," said a Lucid spokesman. "We are just looking at the best time to deploy. We would do so on the major networks." That's a departure from Tesla, which doesn't advertise much at all. But Tesla gets huge amounts of free publicity, and Lucid is a new brand. The promotional materials the company has produced are relatively sophisticated. Here's a video about the car's 9.9-second quarter mile: