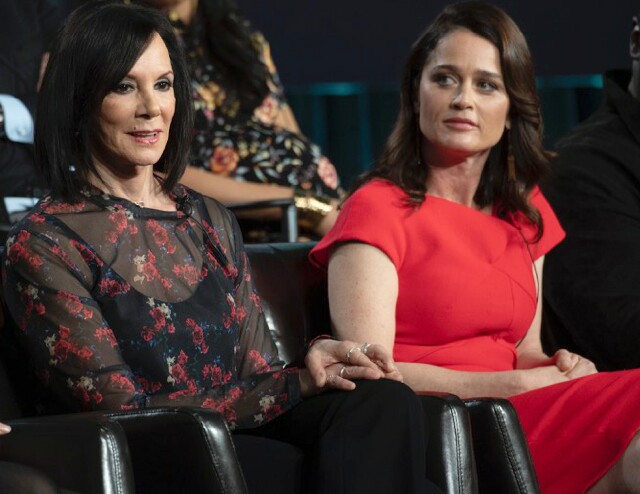 In 1993, few people in the United States had heard the name Marcia Clark.  But by 1995 she was a household name.  Appointed to the L.A. District Attorney’s Office in 1981, Clark spent ten years in the Special Trials Unit, where a number of high-profile cases crossed her desk.  But it was her appointment as the lead prosecutor on the infamous O.J. Simpson double-murder trial that changed everything.  Intense public scrutiny dogged Clark for the duration of the nine-month trial and following Simpson’s acquittal.  (Imagine if social media had been around at the time.)  Disillusioned with the justice system, Clark (pictured at top, left) tried her hand at writing and penned the New York Times bestseller “Without a Doubt” (about the Simpson trial) before turning her talents to fiction.  Now she is embarking on another journey, that of executive producer for the new ABC series The Fix, and while the series’ premise and lead character, L.A. District Attorney Maya Travis, may appear autobiographical on the surface, Clark insists they are not.  "This is different [and] a complete departure from me," Clark told MediaVillage during a recent interview.  "Maya isn't me.  She is an entirely fictional character, so it actually gives me more freedom."

The Fix follows Travis, portrayed by Robin Tunney (pictured top right), as she becomes embroiled in a high-profile murder trial, prosecuting an A-list actor for double murder.  After losing the case, a dejected Travis moves to rural Washington and the peaceful appeal of farm life.  That is, until the same star comes under suspicion again for murder eight years later.  Against her better judgment, Maya returns to the DA’s office hell-bent on finally getting justice.

"[Maya] went off to a horse farm and I can't say I am not jealous of that," Clark laughed.  "She really gave everything up and walked away from it.  Then she comes back with a lot of ambivalence, which is a whole set of different circumstances."

For Clark, after 20-plus years of writing and numerous media appearances as a commentator discussing different aspects of various trials, she was prepared for the challenge of venturing into the behind-the-scenes world of television production.  "I don't really find this difficult," she explained of her executive producer duties.  "I’ve been writing crime fiction for 15 years now, after leaving the DA's office, and that's all I have been doing, so it’s easy and actually more fun.  It's like, ‘Wait, I don't have enough evidence?  Backspace, backspace, I found fingerprints!’  I get to decide how the cases come out.  I love that even more."

After her initial combustive relationship with “reality” television back in the ‘90s, today Clark happily credits scripted programming as a major catalyst in the public’s changing opinion of her, thanks to actress Sarah Paulson’s portrayal of her in the acclaimed FX limited series The People v O.J. Simpson: American Crime Story.  "The remarkable thing about Sarah is that we did not meet, and I had nothing to do with that show at all," she explained of the series.  "They didn't consult any of us while they were doing it.  Everything was about done when Sarah and I finally got together.

"I never expected to meet her or see a performance like that," Clark continued.  "Of course, I knew she was a great actress, so we had dinner and that night we closed the place down.  We got drunk and it was fantastic.  After seeing her performance, I have to say I was blown away.  She is such a genius and how she got inside the feeling of being in the position I was in and what it was like ... I don't know how, but she did it and did it brilliantly.”

That said Clark isn’t sure The People v O.J. Simpson opened new doors for her.  "I don't know [that it did],” she admitted.  “That's a good question.  Would this have happened?  This is one of those ‘if this, then that, maybe it did’ scenarios.  My phone didn't necessarily ring more often – well, not right away.  It rang more with invitations to be on television shows as a commentator."

She also has high praise for the five-part, Academy Award-winning ESPN documentary series O.J.: Made in America; one she did participate in.  "It's the most genius piece of documentary filmmaking I've ever seen,” she raved.  “Talk about brilliant.  I knew it was going to be an important, well-done piece and that’s the reason I agreed to do it.  Did I know it was going to be a five-hour sweatbox?  No.  It was like 100 degrees with no air conditioning.  I said things I didn't mean to say, and I swore.  It should be required viewing in high schools.  Let kids see reality; it's what they need to see and know."

Having completed all ten episodes of The Fix, Clark is back at work on her eighth novel featuring fictional defense attorney Samantha Brinkman.  In addition to that, she's continuing her on-camera work with A&E's Marcia Clark Investigates: The First 48, and through a partnership with ITV hopes to do much more.  "Fingers crossed," she said.

As for the subject of her most notorious case, she hasn't heard if he'll be tuning into The Fix.  "I don't think he is going to watch," she smiled in closing.  "But that's just a guess.  Who knows?  Maybe he will."