Marketing the Infiniti QX60: It's Not for Car Buffs 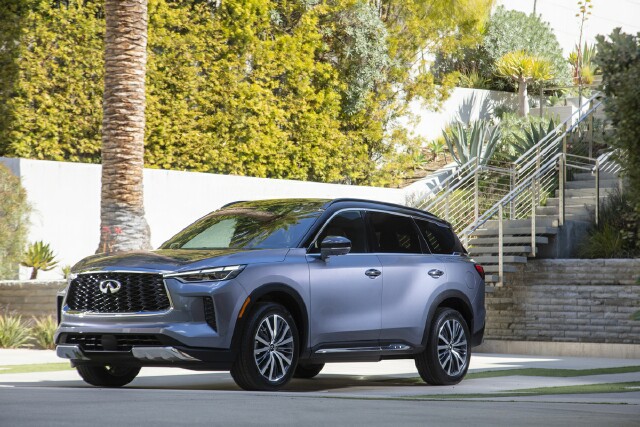 Is it a vehicle a "car guy" would buy? No. And that's not the way Infiniti (the luxury division of Nissan) plans to market it. On July 12, the company unveiled pricing (it starts at $46,850 for the Pure model and tops off at $60,350 for the Autograph) and a rather interesting scheme to convince consumers to buy it. It's all set against a backdrop of a changing mission for the brand.

Infiniti is teaming up with Cameo, whose mission is to connect fans directly to "pop culture icons." In a promotion before the car goes on sale next fall, consumers can ask questions about the car to five celebs -- Erin Andrews (Fox Sports), Clinton Kelly (What Not to Wear), Gabby Douglas (Olympic gold medalist), Misha Collins (Supernatural) and Dule Hill (The West Wing, Psych) -- and get personalized video replies.

The intended buyers are entrepreneurial, but more likely to be seen in the office suite than in the garage. "Our target customer is incredibly busy, and successful in a lot of areas," said Phil O'Connor, director of marketing communications and media at Infiniti. "They're not auto enthusiasts, not reading the buff books." That profile also led Infiniti to enlist the help of actress Kate Hudson for the global reveal in June. She appeared (suitably busy) in a video -- obviously scripted -- about filming a QX60 commercial. It's a minidrama, so far viewed 44,161 times on YouTube.

O'Connor said the aim is to build excitement before the launch. "We will get up to 500 questions answered in product videos," he said. "It gives us a lot of content, which we can push through a host of channels to reach consumers and retailers."

The QX60 will be offered with only one drivetrain, a 295-horsepower, 3.5-liter V-6, connected to a nine-speed automatic. The promotions so far have put the mechanical details on the back burner, which goes along with the target customer. The hood never went up at a recent event in New York.

"We're laser-focused on our target customers," O'Connor said. "We're not saying they're not interested in the mechanics of the car, but they're not car enthusiasts. We can't count on the car being front and center in their mindset. We're looking at different ways to break through and be compelling, to deliver the great product message we have." In other words, they want a car that slots seamlessly into their busy lifestyles. They just want it to work, and to have enough power and torque to carry the family and tow occasionally. Jeff Pope, group vice president of Infiniti Americas, said Infiniti will "focus on stress-reducing technologies" with the QX60. "Its interior is serene and full of technology that takes the stress out of driving, all of which allow its owners to conquer life in style," he noted. The Kate Hudson video shows her visibly relaxing at the wheel, admiring the luxury appointments. Lincoln has used a similar approach very successfully with actor Matthew McConaughey as a spokesman.

Infiniti is also emphasizing Japanese design elements in its QX60 promotion. The mesh grille is origami influenced, the piano-key headlights have a "kimono fold," and the seat quilting is very Zen -- designed to resemble "ripples of water on a pond." This, the brand hopes, will have the resonance of "German engineering."

Nissan COO Ashwani Gupta said last year, "We will bring back Infiniti as Nissan-plus, in terms of product and technology. Infiniti will be great again."

"Nissan-plus" essentially means the Infiniti vehicles will be closely based on existing Nissans. But O'Connor said the QX60 is much more than a gussied-up Nissan Pathfinder. "We have a strong focus on the things that matter most to our customers," he said.