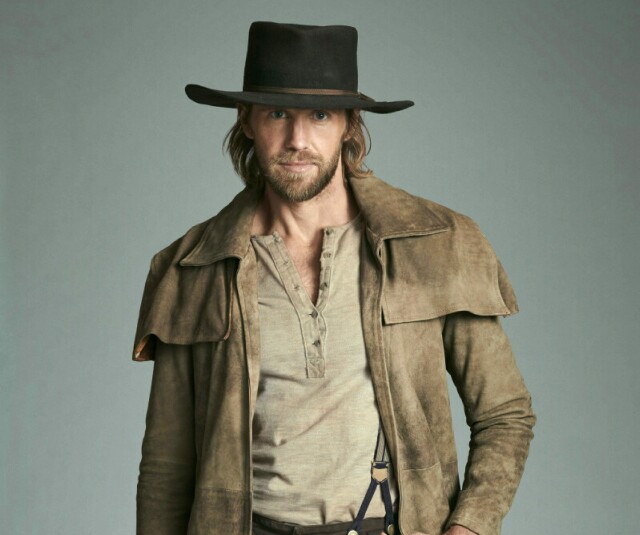 Portraying lovable cad Hoyt Rawlins on The CW's Walker spin-off Walker Independence is something that comes naturally for actor Matt Barr. It's a character the Texas native created a version of on the present-day Walker, so when the time came for a spin-off, and to catapult him to the 1800s-set Independence, the move seemed organic. "It kind of started early on when we were doing a Walker [episode]," he explained in an exclusive interview with MediaVillage. "The writers came to me and sort of pitched the idea of doing this spinoff. So, it kind of was there from the beginning. We loved this character so much, it just felt like the planets had aligned, and the writers wrote him so well. I feel I heard his voice and knew how he danced, so early on we thought, 'Let's keep running with him since we killed him off in the Walker series.'

"That's kind of how that was born," he continued. "Then our showrunner Seamus (Kevin Fahey) fleshed out this whole world of Independence and all those colorful characters. I'm confused about who's the O.G. Hoyt, but he's the great, great, great, great, great grandfather of the Hoyt we met on Walker, and I guess his namesake. So, I'd say the apple didn't fall far from the tree. They're very much the same DNA and have that same reckless spirit. But both are equally amusing and have a sense of playfulness. So, I like that there's a continuity to them." 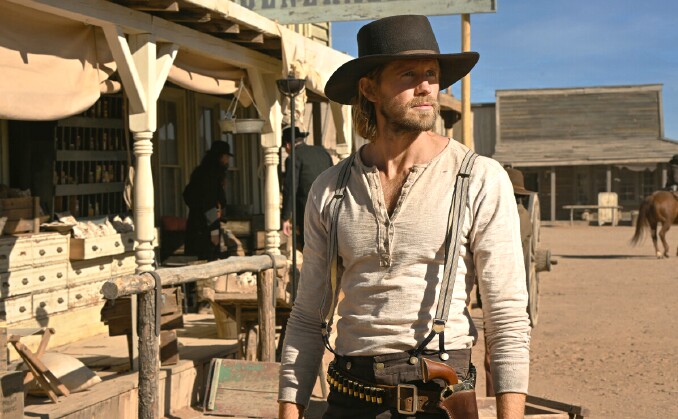 "I very deliberately wanted them to be similar ... to establish why the Hoyt Rollins audiences had known to this point on Walker was the way he was," Barr added. "I liked the idea that we can't really outrun our fate and that's a lot of our DNA. There's a quality to both Hoyts I love -- they [both] have full hearts but make a lot of poor decisions and get in their own way. Both have a soulfulness and I thought that was appealing part of the characters -- maybe even to a fault. I do think they're different animals in ways. The 1800s Hoyt is more dangerous because, in the Wild West, you had to be to survive. The modern-day Hoyt was a little more talk, whereas the Hoyt of Independence is more a man of action. But equally, both just find life amusing, and there's something fun about that. They're just kind of like, 'Hell, let's jump,' you know?"

Viewers got to see the softer side of Rawlins from the beginning of Independence when he befriended the series' central character, Abby Walker (Katherine McNamara), who arrives in the small Texas town after witnessing her husband's murder. At first, Rawlins saw her as an easy mark; however, when she pinned a robbery on him, he gained new respect for the feisty newcomer. "I always saw him as having a Robin Hood quality," Barr said. "He does bad things. He does steal and break the law as that's what outlaws do, but there is a lot of nobility to him. He has a code and a sense of moral compass. At the end of the day, right is right. You steal from the rich and give to the poor, and that's not the worst thing in the world. As many steps backward as Hoyt seems to take, I wanted the audience to see this guy searching for a purpose that's greater than himself."

Independence is not Barr's initial foray into the Wild West. In 2012 he co-starred in HISTORY's limited series Hatfields & McCoys as Johnson "Johnse" Hatfield. It's a genre his upbringing helped inform. "Growing up in Texas, you're sort of around that Western culture," he shared. "It's very prominent and was always a really appealing culture. I remember the smell of the leather boots, and cowboy hats, and I'd watch Westerns with my dad or my uncles. There's something romantic about them. Maybe there's a little bit of Texas pride in there, but I love the idea of the Wild West and how it was gritty.

"Walking onto our Santa Fe set helps do a lot of the work for you," he added. "It's like being in a time machine. I have no complaints about the wardrobe either. There's something about putting on the boots and gun belt, with all the bullets and a colt revolver. You're walking differently. It's a gateway to being an 1800s cowboy."

In this week's episode of the series (October 20), viewers get some insight into Hoyt's roots. It's also action and stunt laden, which had Barr grinning from ear to ear. "We all attended Cowboy Camp to train with horses," he said. "Just to get the finesse right so we could sell it. That's something I'm really proud of and a huge majority of those stunts is me. My stunt double Johnny did all the falling off horses though, which I was actually glad to let him do."

As for the public's continued fascination with westerns, Barr has an interesting take. "It's a simpler sandbox for the world we currently live in," he said in closing. "The stakes are equally high. It's life and death, and we're fighting and dying for our family and what we love. A lot has changed in 150 years, but nothing has changed in terms of what drives humans. It's ugly at times but there's that ideal of a free country, and you can pursue your dreams. There's something very obvious about that in westerns."

Walker Independence is telecast Thursdays at 9 p.m. on The CW.