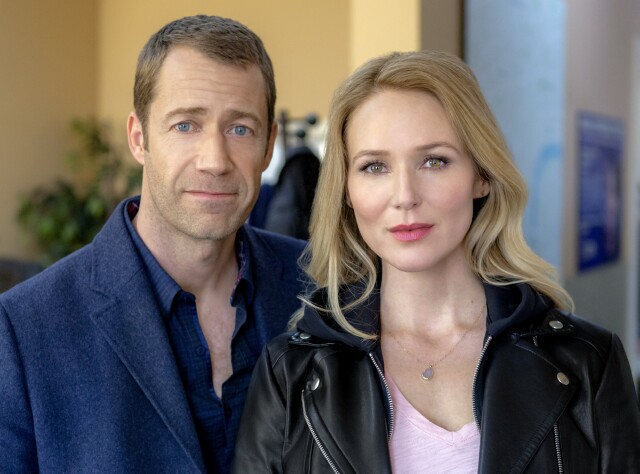 Acclaimed singer/actor/author Jewel (who wowed the crowd at Hallmark's Upfront event on Wednesday evening) and Colin Ferguson (pictured at top with his co-star) return to Hallmark Movies & Mysteries this Sunday for a new installment of their Fixer Upper Mysteries movies based on New York Times bestselling author Kate Carlisle’s books. Concrete Evidence: A Fixer Upper Mystery continues the adventures of contractor Shannon Hughes (Jewel) who, after finding a human skull in the basement of her current project, enlists super-sleuth/author Macintyre "Mac" Sullivan (Ferguson) to deconstruct the mystery surrounding her find. Together, they use the victim’s diaries as a blueprint to build the framework surrounding a murder.

I recently caught up with Colin Ferguson, who told me he was no stranger to the contracting world, having personally renovated his Los Angeles home. He couldn’t help but laugh when I asked if he’d offered co-star Jewel any construction advice. “I’m the last person to give her advice on anything,” he replied. “And especially on how to have a successful career. She’s so smart, obviously incredibly talented as a musician and she’s just really great as an actress. She’s always really present and knows her stuff.”

Doing this second installment of the series was a joy for Ferguson as all the character foundations were laid in Framed for Murder,which debuted this past January, making work on this one easy. “The first one is always the hardest,” he admitted. “You’re laying all sorts of pipe and all that stuff but [these stories] have a sense of humor about them too, which is great. We’ve done one; now this one and there’s another happening in June.  It’s all moving forward!

“These experiences are just the best,” he continued.  “[The Hallmark] people are all so nice. Like when you show up for their events, it’s almost like they’re surprised.  ‘You’re here, so great to see you!’  They are genuinely excited to have you there. It’s nice to not be just a number, like at some of the networks, as that goes a long way.”

The busy actor also has a couple of other films in the can set for release, and he shot a pilot for another network that’s currently being shopped around.  He’s also thrilled to continue his most famous television role to date as The Maytag Man, extending a 49-year tradition the appliance company started with character actor Jesse White in the 1960s. The Maytag Man currently stands as one of the advertising industry’s longest-running icons. 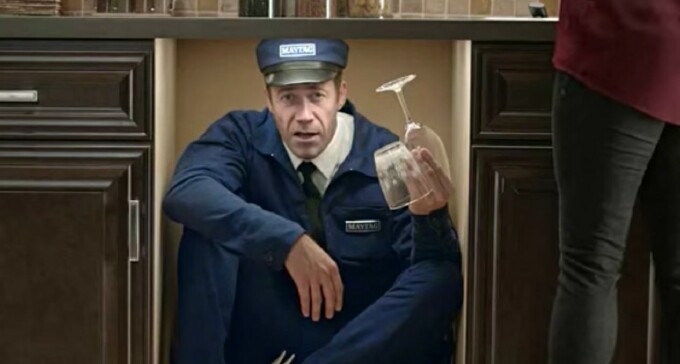 “I would definitely say it’s those commercials I get recognized for the most,” he said.  “[Those commercials] are everywhere and believe it or not, sales are through the roof! I’ve done them for four years now and they’ve asked me to keep going.”

His response? “Hell yes, of course I will!” he laughed.

“They’re a really nice Midwestern company,” he added. “Whirlpool is in Michigan but they own Maytag and the advertising company is in Chicago, so they are all just straight up Midwesterners who shoot straight and I really appreciate that.”

With Oscar winners like Matthew McConaughey, Nicole Kidman and Helen Mirren all doing commercials these days, Ferguson finds himself in good company and knows he hasn’t sold out by doing them, despite the naysayers.

“Some people said, ‘I’m so sad to see that’,” he revealed. “But they don’t understand that before I did the first [commercial] I actually watched TV for a week just to see who was doing commercials. I was like, ‘Oh my gosh. Everyone’s doing them!’