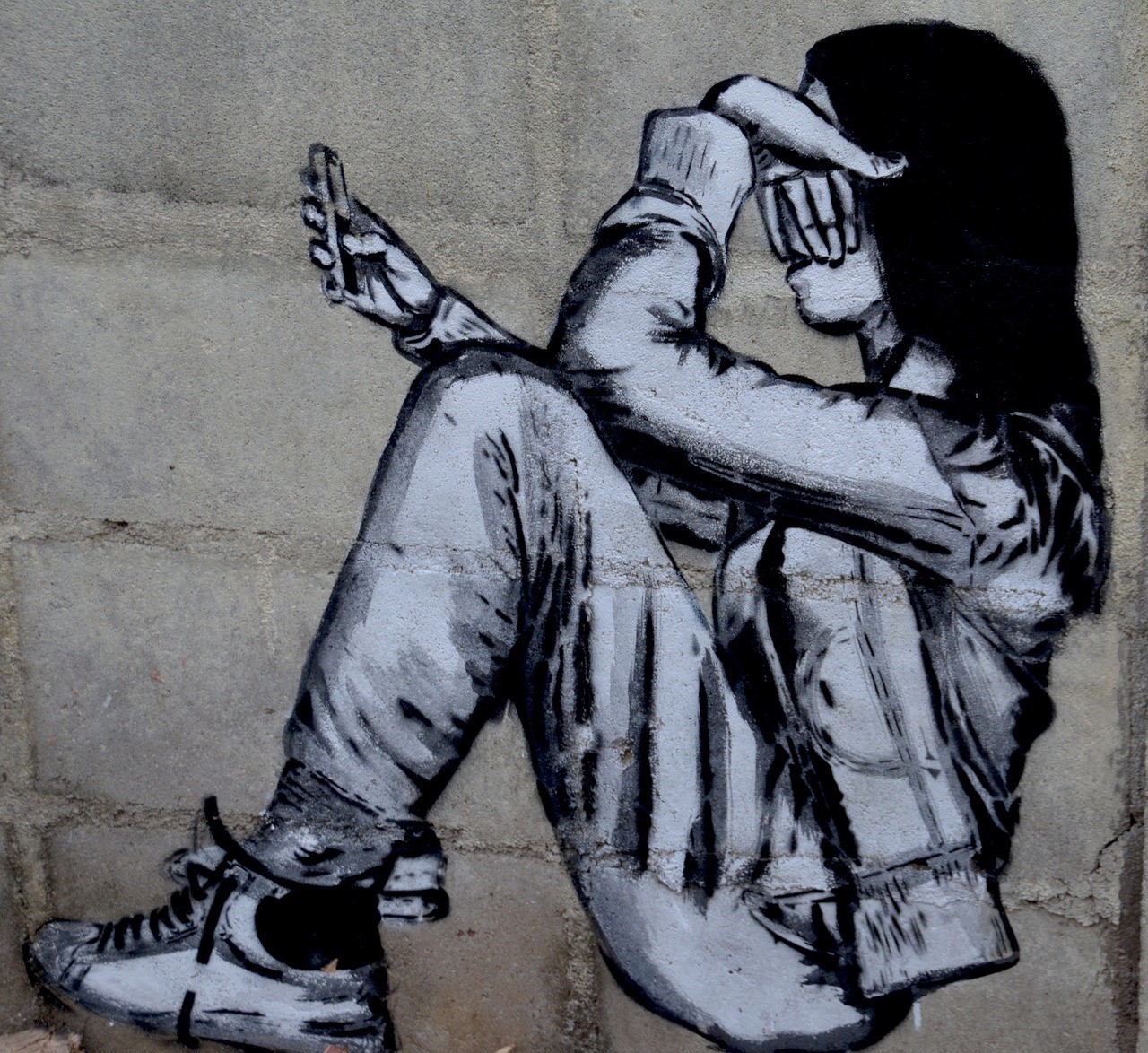 Last week's Cog Blog made the point that a significant number of people worry about expressing their point of view on platforms like Twitter.  One concern is that such openness might negatively impact their job prospects; another is the fear of online attack from those holding a contrary opinion.

One Cog Blog follower, Sarah Ivey from the Toronto-based strategic consultancy Agents of Necessity, was good enough to point out that the 2019 version of Mary Meeker's magnum opus Internet Trends supports my thesis.  I have to admit I've never got the whole way through a Mary Meeker deck.  I tend to get stuck on that ridiculous chart that compares time spent with a medium with ad spend.  Her point being that the more time you spend with the medium (not, please note, with ads on the medium) the more valuable that medium is to advertisers.

Mary's latest deck runs to a modest 334 pages.  My bugbear chart on time spent is on page 22.  I'm very grateful to Sarah for risking her sanity getting through to pages 161 and on from there.

According to Pew Research, quoted by Meeker, the proportion of U.S. adults saying they are "almost constantly" online has risen from 21% three years ago to 26% today.  Amongst 18-29-year-olds that figure rises to 39%, up from 36% three years ago.

So far, so fairly standard, if worrying.  But then Meeker's deck gets interesting.

When British teenagers were asked, in an early 2017 study by The Royal Society for Public Health, to rate the five most popular social media platforms against a number of positive and negative criteria the results were as follows: 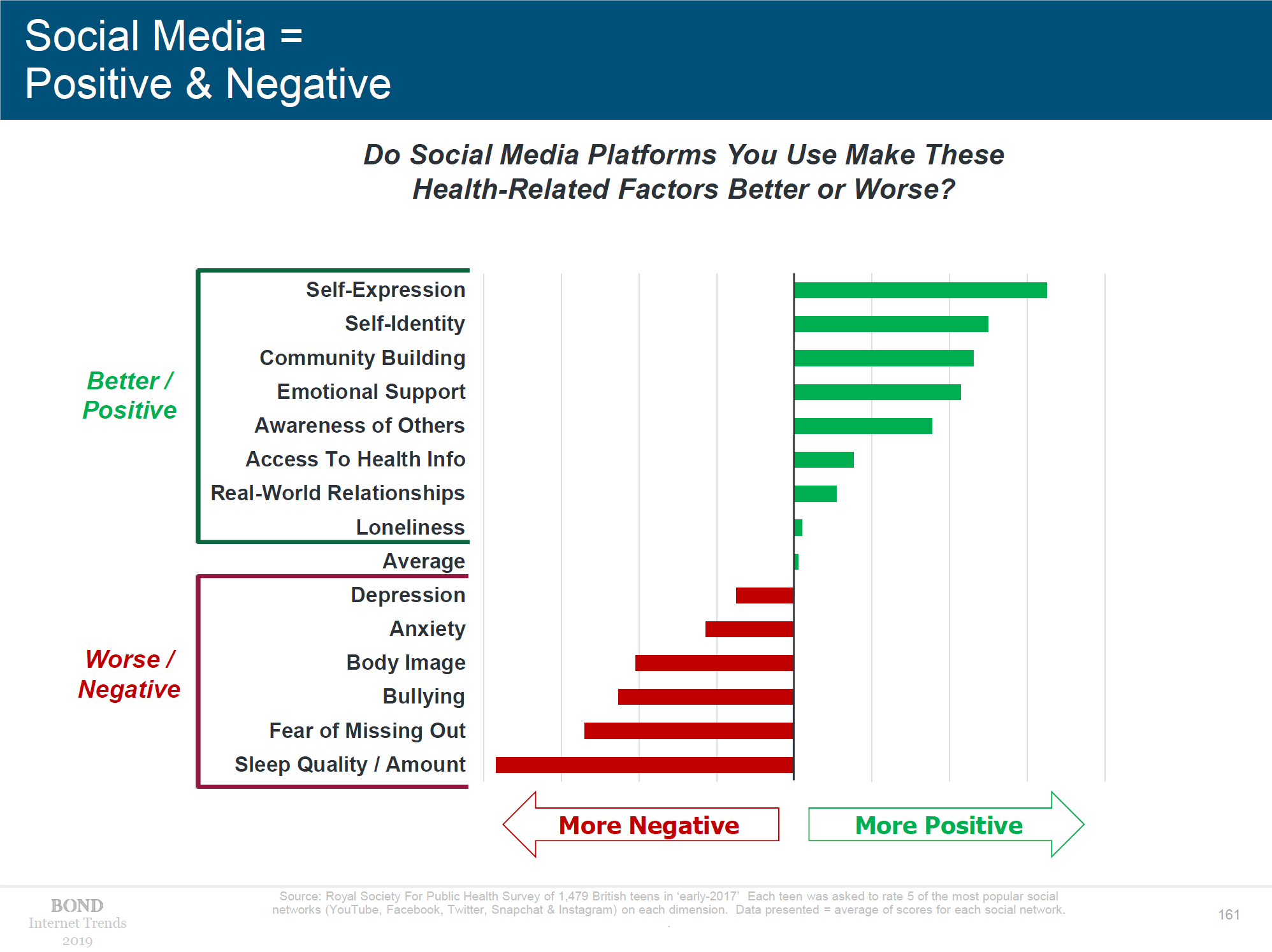 Meeker doesn't quote the numbers to go with this chart but even at a topline level the impact of social media is clearly balanced between the positive and the negative.  She goes on to quote from a 2014 study by Marc Trussler and Stuart Soroka who found that "regardless of what participants say, they exhibit a preference for negative news content," and a Pew Research 2018 study amongst U.S. teens that found these percentages claiming to have experienced the following online:

To recap, social media as a whole reaches an awful lot of people who increasingly find ways to spend more and more time on the platforms.  Yet the platforms create negative as well as positive feelings, no doubt helped along by what appears to be a greater than natural interest in negative stories.

Finally, amongst those using the social platforms the most (represented here by U.S. teenagers) two-fifths have experienced offensive name-calling and one-third have noted the spreading of false rumours.

To make the same point made here last week it is absurd that the platforms are not regulated to drive the most obvious excesses out of the system.  It is equally absurd that an industry that ties itself in knots considering all aspects of a media form, going way beyond the basic gross audience size to ensure clients get the best advice on the most appropriate media form for their messages, seems to forget to look beyond the headline numbers to consider the nuances involved in social media.

Advertisers might want to think carefully about associations with negativity, rather than obsessing about gross numbers of users.

Planning as well as buying, in other words.