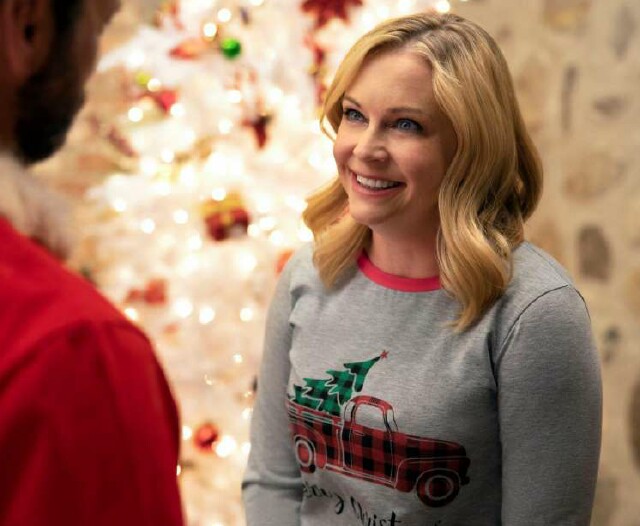 Actress and producer Melissa Joan Hart is pretty familiar with the professional demands of the holiday season. Her foray into the Christmas movie genre dates back to 1986, before Sabrina the Teenage Witch, when she starred opposite Katherine Helmond and Sid Caesar in Christmas Snow. Since then she’s continued making Christmas movies for a host of networks, most recently Lifetime, where she has worked in several different capacities. Last weekend saw the premiere of Feliz NaviDAD, which she directed. This Friday, she will be seen opposite Jason Priestly in the premiere of Dear Christmas, in which she stars. Sunday will bring the premiere of Once Upon a Main Street, which she produced. All three movies come from her production company, Hartbreak Films.

While she’s delighted to bring so much cheer to the screen over the holidays, it’s her first on-screen Christmas experience she holds most dear. "I got to shoot [Christmas Snow] in Vancouver, and as a New Yorker going to Vancouver, it was very exciting," she recalled. "It was fun, with all the fake snow and filming in our fake candy store and acting with Katherine Helmond and Sid Caesar! Working with them at only 10 years old … I was just amazed by that.

"Then 20 years later I did Holiday in Handcuffs with Mario Lopez in Calgary, and we had a blast," she continued. "It was so funny, and ridiculous, and off the wall. That was the first time I'd really heard about the ‘Christmas movies.’ I love doing them because they do give people a good happy feeling. I’d love to infuse them with a little bit more comedy, or a little bit more drama, [but] the demographics sort of say that people want this season to be a season of happiness and joy. Whatever is going on in our real lives, in politics, or in the pandemic, [people] can come to this safe place. While making cookies or sitting on the couch with hot chocolate with our kids at night, we can watch these movies and feel like it's going to be okay." 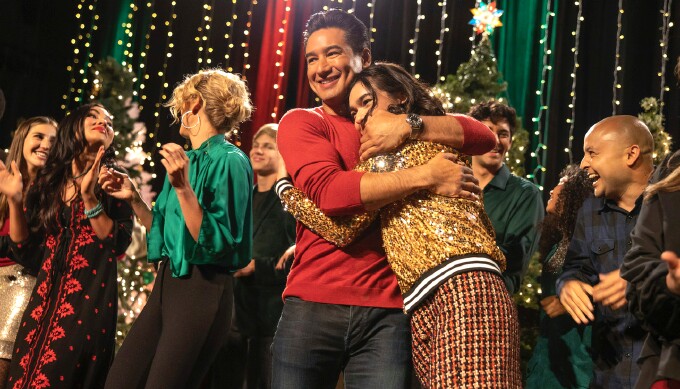 As far as making Christmas movies goes, even with the pandemic 2020 was an unusually busy year for Hart. First, she directed Feliz NaviDad, starring her friend Mario Lopez (pictured above, center) and Annalynne McCord. Due to the pandemic production shutdown, she was concerned it might never happen. "We were trying to get this movie going during the winter, and actually shoot when there's snow and it's cold and Mario wouldn't complain about wearing a coat," she explained. "March 15 was our start date, and we shut down March 13.

"We kept waiting and waiting," she continued. "We were prepped and ready to go, and then this whole, 'Will we, won't we, when can we?' [thing happened]. Of course, we wanted to deliver these movies on time to Lifetime and get them up before Christmas. We just didn't know. But we were prepped and ready to go [throughout]. As soon as it was [safe] to go it was, 'Boom! We're going!'"

However, with the stringent COVID-19 requirements Hart had to face a host of new challenges. "You need to be COVID tested three times before you get here, [etc.]," she explained. "It had its challenges for sure. It was a big deal, and all eyes were on us. We were starting this protocol. We were being watched and I took that very seriously as a director and a producer.

"We had some snafus on set," she continued. "We [were] held up for a few days, but we had our medic and our protocols in place, and we worked with the unions closely, and the state of Nevada. The governor came to visit, and we were able to get this movie up and made, which was amazing. Because of the success of that one, we immediately went into another movie in that same bubble. We had 40 crew members and that was our bubble. A lot of those crew members are dating. It was very nice to be in a bubble … like nobody's going out." 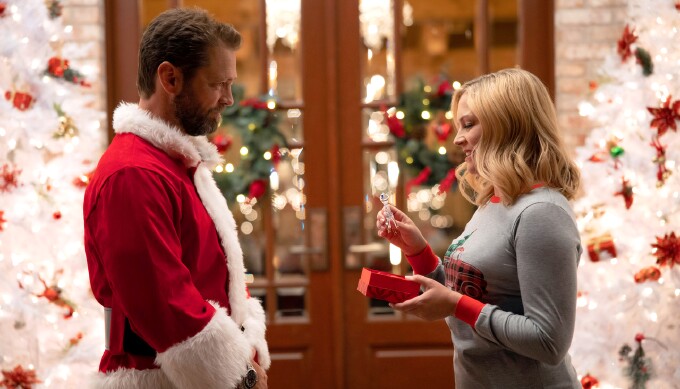 With no time to waste, "I went straight into Dear Christmas," Hart (pictured above with co-star Jason Priestly) recalled. "We actually wrote and produced it for this [COVID] era. You will never see more than six speaking roles in a scene. All the background people are from our crew, and you'll see my character is always running into the ball late, or when everybody is gone, or about to have a party, or if there's a party in the other room you can hear it, but there's never any parties or things going on around us."

Next up was Vanessa Lachey's movie, Once Upon a Main Street. "It was great to be able to just keep going, keep this bubble, and keep the safety," she explained. "We really think we did a great job and [helped] get the industry back up and running. You [can] see little Easter eggs in Feliz NaviDAD with some reindeer on a front lawn with masks on! I'm really proud of these movies."