Monty Python and the Oval Office: It Might be Funny If It Wasn't So Serious 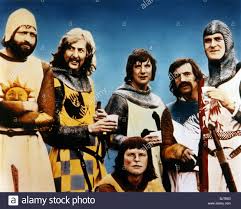 Like fine art, good wine, and at least in the eyes of the Supreme Court, pornography, humor is tough to define in a few words. President Trump is making it easier by turning national policy into a stand-up shtick. Previous presidents have chosen their words carefully because they knew what they said mattered. Trump is delivering his pronouncements as a version of a comedy club's open mic night. The consequences, the pandemic's statistics, are anything but a barrel of laughs.

Trump's monologues aren't funny because of their by now, shopworn self-promotion or his Don Rickles' insult-a-minute delivery when reporters get under his skin. Rather, the routinely lie-laden performances follow the Monty Python model, transforming press conferences into a loony "Spamalot" stage. Indeed, odds are after nearly four years, if Trump announced that Homeland Security SWAT teams had just neutralized the Killer Rabbit or Space Command shot down an attack of flying cows, most journalists likely would nod and keep taking notes.

Although Trump isn't trying to be funny, one theory of comedy fits him to a tee. It asserts humor is the unexpected juxtaposition of opposites. For example, a guy in white tie and tails sitting at a banquet suddenly takes a pie in the face. The stunt gets a laugh—or a groan. It's the effect Trump is achieving. From touting success with the pandemic as infections skyrocket to bragging about an economy with cratering growth, for most people the constant contrast between reality and the ridiculous isn't a side-splitter, but it's a joke nonetheless.

If Trump only was spending his time working to one-up "Monty Python and the Holy Grail," his daily buffoonery would be ludicrous but not lethal. Sadly, that's not the case. Borrowing from Groucho Marx, who recycled "Who's buried in Grant's tomb?" as one of his TV quiz show questions for years, Trump last week again touted hydroxychloroquine, the COVID-19 treatment rejected by medical experts. Trump cited no less an authority than a physician who warns women their gynecological problems come from having sex with demons in their sleep.

Had Trump done his hydroxychloroquine huckstering as a Shopping Channel showman, the network would have pulled the plug before the first phone order rang. As president, however, he can blather away —prescriptions for the disproven drug surged 46-fold when he touted it in April—without regulators or networks batting an eye. Add outright prevarication such as his retweeted accusation that Dr. Anthony Fauci is conspiring to boost COVID-19 deaths; the human cost from misleading Americans to jeopardize their health is where humor disappears.

To be sure, in making bogus drug claims while retweeting wacky accusations about Fauci as his political enemy, Trump isn't breaking new ground. The unbalanced and unscrupulous have exploited Americans' gullibility for generations. From Father Coughlin, the demagogic priest famous for his anti-Semitic radio rants in the 1930s, to QAnon whose bizarre Deep State claims appeal to Trump's son and campaign staff today, there's always an audience ready to believe plots are afoot. That's what transforms Trump's statements as the President from comedy, however ludicrous, into criminal negligence as the country struggles with COVID-19.

Take belief in conspiracies. According to a Pew Research Center survey in June, most Americans—71 percent—are aware of an online conspiracy theory alleging powerful people such as Bill Gates planned the coronavirus outbreak. Twenty-five percent believe there is some truth in the tale. Pew's data shows their education helps explain why. Half of Americans with a high school diploma or less—48 percent—say the idea is probably or definitely true; that compares to 24 percent with a bachelor's and 15 percent with postgraduate degrees.

Like schooling, political affiliations also sort the believers and skeptics, according to Pew. The June survey shows that 34 percent of Republicans and independents who lean toward the GOP say powerful people planned the pandemic. That compares to only 18 percent of Democrats and their independent sympathizers. Among Republicans, ideology also influences the credulous; 40 percent who style themselves "conservatives" view the alleged plot as likely or definitely true.

How many Americans smitten by Trump's drug endorsements and retweeted conspiracies will ignore their doctor's guidance, or blame the Deep State for the pandemic rather than paying attention to public health professionals is anybody's guess. A study soon to be published by researchers in Ireland on the effects of fake news found that hearing about bogus COVID-19 "cures" isn't necessarily going to influence what people do. That's encouraging. But the authors also made clear that two-thirds of the study's subjects had at least bachelor's degrees, and that presidents spouting falsehoods didn't figure in their research.

There's another possibility that could explain Trump's prime time press conference disinformation and reckless retweets of lunacies from the radical fringe. Consider the latest ungrounded attacks on the analysis and recommendations of the country's leading epidemiologist from a President without any medical credentials to dispute public health experts. Occam's razor just might apply: the simplest explanation is most likely correct. Unable to come to grips with reality, Trump actually believes what he says.

In any event, when it comes to their health Americans have a choice. Listen to Fauci, be mindful of the growing pandemic and do their part: wear masks, wash hands, and keep their distance. Or pay attention to Trump, take two Lysol capsules, and call him in the morning.