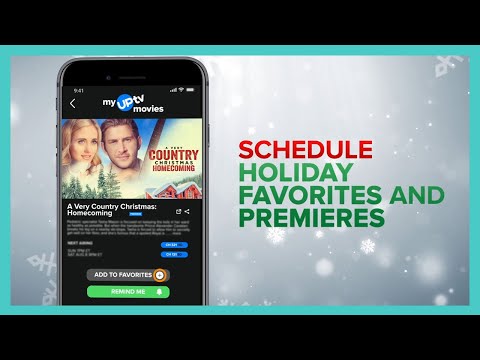 This holiday season, UPtv aims to deliver more holiday cheer than ever with a new movie tracker app and a fresh slate of Christmas movies. The network recently launched an exclusive mobile app, My UPtv Movies, to help fans navigate its popular movies during the year's Merry Movie Christmas themed holiday season, featuring a mix of world and cable television premieres every Sunday night.

It's all part of the network's mission to bring viewers content they love and deepen audience engagement, explained UPtv's Senior Vice President of Marketing Wendy McCoy.

"Fans are able to explore the app and interact with our content on their own schedule," McCoy said. "It's another way to get information to our viewers in a way they can control."

On the My UPtv Movies app, users can browse the network's extensive library of uplifting movies, including holiday fare, and watch previews. They can also customize viewing preferences, including searching channel listings, adding airtimes to their calendars, and even opting in for notifications and reminders. Heading into the holidays, the app is promoting all the movies within UPtv's Merry Movie Christmas slate this November and December, which includes Mistletoe Magic, A Ring for Christmas, A Very Country Christmas Homecoming, Christmas on the Range and Dashing Home for Christmas.

To raise awareness for the mobile app, UPtv is running promos on-air during movies and other programming, as well as in lower-third graphics and highlighting in social media. It is running ads and cross-channel promotion with affiliates, encouraging viewers to download and explore the app. UPtv also plans to feature the app in its weekly email newsletters.

"We have a ton of Christmas movies and now viewers will have information on all the movies they want to see on UPtv literally at their fingertips," McCoy said. "We're going to promote it everywhere."

For now, the app doesn't offer full-length movies or shows, but McCoy said the next phase could include longer-form content, and, potentially, behind-the-scenes and bonus fare exclusive to the app. Eventually, there could also be advertising opportunities for brand partners, she added.

The app is currently decked out for the Christmas season. Along with movie information, it's promoting UPtv's annual GilMORE the Merrier  programming stunt, when the network airs its full library of all 153 Gilmore Girls episodes. New to this year's marathon are the cable premieres of all four Gilmore Girls: A Year in the Life movies.

"That's our Shark Week and it does amazingly well," McCoy said, referencing the Discovery Channel's iconic and highly rated annual shark-themed programming. "While you're running around, cooking and preparing for the holidays, the Gilmore Girls keep you company."

The holiday season is typically a boon to UPtv's audience. Last year, holiday fare helped attract 17.7 million viewers to the network, and Q4 2019 primetime ratings were up double digits among women 18-49, women 25-54 and total households, compared to Q4 2018 levels. In 2020, as families reevaluate their plans based on the ongoing COVID-19 pandemic and stick close to home, McCoy said she expects holiday programming will be even more popular.

"This year, people are craving Christmas because it is going to be such a welcome relief and a reason to come together in a place that is more uplifting," she said. "You'll feel the spirit of the season, love and unity when you get here."

Once fans pack away their ornaments and stockings, the movie app will shift to promote UPtv's 2021 premiere movies. The network plans to debut a new movie every week, including a slate of premieres right out of the gate starting on January 3 plus stunts around Valentine's Day and Easter. The app will spotlight these new movies and library content. Now that viewers are flocking to UPtv's movies, McCoy said the network wants to build on the momentum.

"We have established ourselves as a movie destination year-round, and the app will make it so our movie-loving viewers never miss a movie," McCoy said.