NBC’s “The Good Place” -- All About Good Janet, Bad Janet and Baby Janet 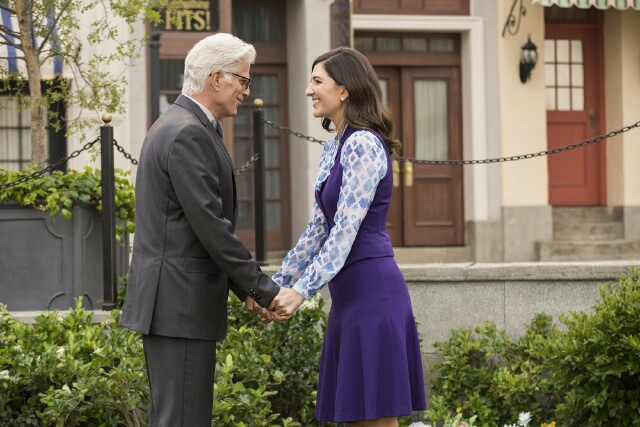 There was good news for NBC’s freshman comedy The Good Place recently when the network announced its renewal for a second season.  Viewers and supporters of the show can officially shout “Fork yes!” to the promise of more zany adventures from Eleanor (Kristen Bell), Michael (Ted Danson), Tahini (Jameela Jamil), Jianyu (Manny Jacinto) and Janet, the Siri-like guide to life in the title locale played by breakout star D’Arcy Carden.

As Janet, the know-it-all information repository, Carden stole her scenes and fast became an integral part of the core cast. For Carden the role was truly a gift, as it’s not often an actor gets to play good and bad versions of the same character – not to mention a character that dies and is instantly resurrected as a baby version of herself.

“People thought I was gone for good, but I did quickly come back,” Carden laughed when recalling Janet’s early demise.  “That was one of the things executive producers Mike (Schur) and Drew (Goddard) told me in our first meeting. There was so much in-between they weren’t telling me about, but they did tell me I would be powered down in one episode and immediately be alive again.  It was such a fun twist on this robotic character.  Getting to play a different side of her is a dream.

“I love Janet,” she added. “But of all of the Janets, I think the most fun I have is with Baby Janet. I feel lucky that I really get to play a bunch of different characters [with this one character].” 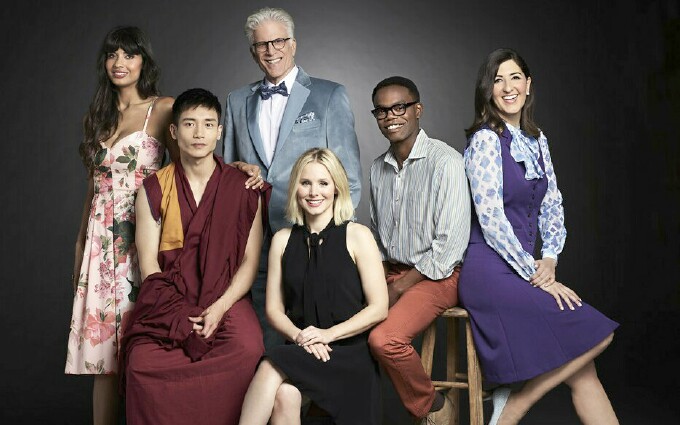 It was the introduction of Bad Janet, the antitheses of her usual bubbly and cheerfully helpful character and a resident of The Bad Place, that really put Carden in the foreground of the narrative. (Carden is pictured above right with co-stars Jameela Jamil, Manny Jacinto, Ted Danson, Kristen Bell and William Jackson Harper.)

“It was so fun playing Bad Janet,” she told me.  “Although it was scary at times because they really let me go, like when I was talking to Ted [Danson] in scenes they kept saying, ‘be meaner.’  It’s really hard being mean to Ted because I love him to death!  He’s just the best actor, so down to play and up for anything.  I do feel I was really mean to him in a couple of those takes.”

Carden said Bad Janet’s design was a “collaborative effort” -- but she’s taking full credit for at least a part of her look. “I got to pick out the pants she wears,” she laughed.  “I had a lot of input as we knew she was going to be a blonde, bitchy, leather-jacket wearing bad ass. It was really fun.”

Series star Kristen Bell was quick to praise Carden’s bad alter-ego admitting, “I saw her costume change and I thought, ‘You go girl! You got a costume change! You got a ponytail!’ I mean she is brilliant no matter what she’s playing and she makes us laugh more than anyone on set.”

With the show’s season finale startlingly hitting the reset button on the entire narrative, it’s anyone’s guess as to how Janet, good/bad or otherwise will feature in the second.  Carden is just happy she gets the chance to do it all over again. “Maybe Janet could get powered down forever and be replaced by Bad Janet,” she mused.

“The whole cast has really bonded,” Carden continued. “I just want to be on set with all these people again. I love that my job is getting to work with my friends. It is just too good to be true. We even have a daily group text going around because we truly miss each other.”