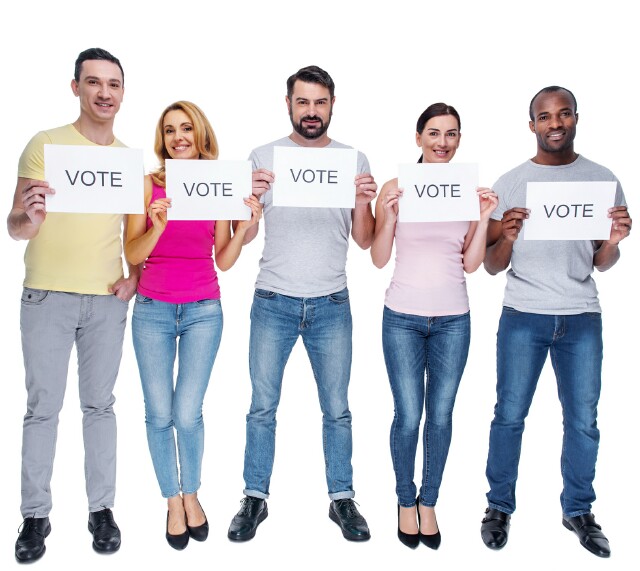 Top ad trade associations and agencies have banded together to encourage the industry to get out the vote in this year's midterm elections with a new non-profit organization, Voting Maven, which is entirely non-partisan.

The Maven part of the name stands for Media and Advertising Voters Engaging Now. The group's formation was inspired by a striking fact: the marketing and advertising industry is dominated by groups that are underrepresented in voter turnout, according to the group's Chair, Ashley Swartz, who is also CEO of the agency Furious.

All told, 22 organizations have signed on to Voting Maven to date, including the Association of National Advertisers (ANA), the 4A's, the Interactive Advertising Bureau (IAB), Publicis Media, Horizon Media and GroupM.

"As employers and leaders in the media and advertising industry, we recognize that our workforce skews younger than average," Swartz said, noting that the industry is around 60% women as well. "We also recognize that we have a role to play in our society as storytellers and in conveying information and motivating people to take action."

Insights from a recent study by MTV and the Ad Council Research Institute mirrored what Swartz had heard in her own research. They pointed to the need for a one-stop, trusted destination to find information about local candidates, issues, polling places and registering to vote. "What we hope to provide is information that is fact-based and reliable," said Swartz. "Get people to use that information, get more people to participate. A civic flywheel."

Carryl Pierre-Drews, Executive Vice President, Chief Marketing Officer of IAB, had this to say: "The future of our country's leadership depends on everyone voting, especially the youth in our media and advertising industry. The Millennial and GenZ generations are natural changemakers, and we have hundreds of thousands of them working in our over 700+ member companies."

The IAB's support consists of "communicating the important milestones around voting leading up to the midterms to our employees through e-mails, as well as externally to our members and followers though our newsletters and social media channels," Pierre-Drews said.

"It's fair to say that the most effective way to enact change in this nation is for everyone to exercise their right to vote in free and fair elections," added ANA CEO Bob Liodice. "Voting represents the bedrock of our democracy, and the ANA is proud and happy to join our colleagues in the marketing and advertising industries in Voting Maven's effort to get everyone to the polls, now and in the future."

In addition to supporting the effort via e-mails to members, the ANA created a landing page on its site with key resources and links to Voting Maven content.

It's not often that so many organizations come together to support a cause, noted Jason Smith, a Voting Maven Co-Chair as well as President of Integrated Solutions at Publicis Media. "When we look at the associations, they typically serve one common goal to create harmony across the industry. So, what better place to go if your goal is harmony, collaboration, and true cross support?"

Smith also noted that the local organizations involved, like Chicago Interactive Marketing Association (CIMA) and ThinkLA,are trusted by their members. "Working with industry groups like our trade organizations helps us create more scale and visibility but also cements the type of theme and dialogue that we want to create," he said.

Why now? This year's midterms are more important than ever. One-third of states have a U.S. Senate race on the ballot; all 435 members of the U.S. House of Representatives are up for re-election; half of the country's governors, secretaries of state and attorneys general are up for re-election, and nearly all states have critical state legislative and local offices to vote on. In the last midterm, voter turnout in the 18-29 age bracket was just 36%, according to U.S. Census data. That means about two out of three people in that age demo did not vote.

According to data from CIRCLE, as of September 2022, 18 states already have more young people (aged 18-24) registered to vote than they did in November 2018. But many states still have a lot of work to do. Given that the media and advertising industry has a disproportionate number of young voters, this is the largest area where the industry can have the greatest impact, Swartz said.

Voting Maven is like a first-aid kit. It's meant for everyone and something everyone can get involved in and support. One way they're doing this is by providing organizations with a playbook that has a communications plan based on pre-established voting milestones, templatized e-mails and content from their social media channels to re-share.

"I want to shout from the rooftops and encourage individuals to support us," Smith concluded. "Civic duty can be fun and exciting."

Any organization that wants to get involved can reach out to Voting Maven on their site at votingmaven.org/contact.