NewFront News and Views: NCM Reaches Millennials at the Multiplex 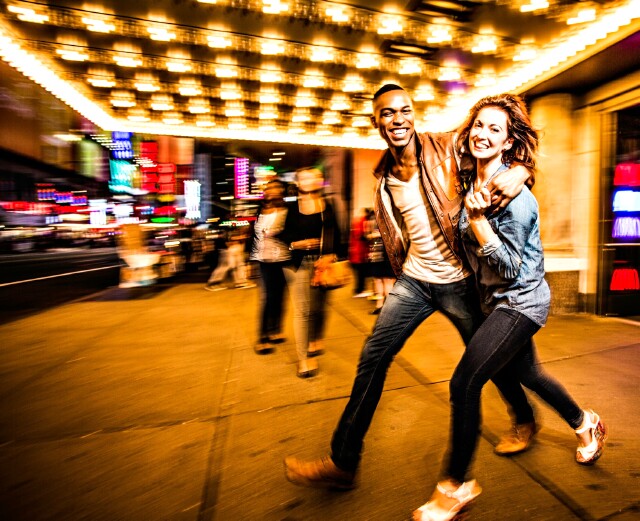 National CineMedia (NCM) last week hosted its annual midday cinema advertising showcase. For the first time since positioning this event in the midst of TV's Upfront Week marathon, NCM had the daypart all to itself. Turner cancelled its popular long-running press lunch, while MundoMax withdrew a planned Spanish-language programming event.

Venue:AMC's Lincoln Square multiplex, located on Broadway near W. 67th St. As plush and grand as any Manhattan movie site around, the large upper level area has a long concession stand next to the main theater which easily doubled as meeting space. Inside the theater, attendees were treated to a DJ and trivia slides posted on the screen, most of them connected to upcoming summer and fall releases. Soda and popcorn were served as attendees went to their seats. Grade: 4 Jacks

Presentation: Out to sell advertisers on the idea that movies consistently draw Millennials better than any other medium -- and are worth more advertising investment -- new NCM CEO Andrew England (most recently at Miller Coors) started off by explaining that he's been on a trek for that audience a long time. "I spent the last seven years drinking beer and searching for the elusive Millennial," he said. "I've found them. They are here. Movies are their social currency." England left it to NCM President Cliff Marks to provide details. The 18-to-34 crowd at NCM-affiliated theaters is up a collective eight percent so far this year, following a 16 percent rise for 2015. What's more, 72 percent of Millennials use DVRs to skip ads inside the TV programs they record. "Think of us as a medium for all seasons," Marks added, accompanied by a variety of trailers and special material from upcoming films, including blockbusters "Rogue One," "Finding Dory" and "Bad Moms." To NCM's credit, the showcase found time for "The Edge of Seventeen," a teen dramedy that could be one of this year's critical favorites. However, the show began on a jarring note with a video that took the company’s motto "The Hits Keep Coming at NCM" way too seriously, with one long (and in my judgment tasteless) clip reel of people and animated characters mostly hitting, punching and kicking each other. I'm sure more than a few folks there were left with three questions. 1. Who put this together? 2. Did anyone review it before giving an OK?  3. Was this approach necessary to make the point?  My answer for that question would be “no.”  Grade: 3 Jacks, downgraded a full Jack because of that disturbing opening video.

News: As Screenvision did the previous week, NCM made a deal with technology service Timeplay to launch pre-movie advertising and content that audiences may interact with via mobile phones. More than 500 locations will implement Timeplay during the summer, with the count expected to reach 1,000 by late fall. Timeplay used another portion of the multiplex to show off its process over lunch. The television industry should pay close attention to what this company is doing. When checking out this technology, I checked in with Timeplay's key executives, who acknowledged they see TV as a natural next marketplace. Viewers would be able to participate via remotes, smartphone or tablet with what they see over smart TV sets or TV-empowered devices. Not present was Audience Entertainment, a company bringing gesture-based interaction to those initial 500 locations this summer. In other developments, a new "Cinema Accelerator" feature will be deployed among affiliated theaters, where patrons get brand messages on their phones when they enter, and those messages are automatically extended to their favorite Web sites and social medial. In the near future, advertisers and ad agencies can set up deals with a targeting optimizer matching desired audiences to specific movie titles or categories, rather than according to MPAA ratings. Grade: 4 Jacks

Cuisine: Leave it to Chef Marcus Samuelsson (a regular judge on "Chopped") to deliver one of the best meals of any Upfront/NewFront event this year. His post-event lunch was a knockout, from super-food salad to chicken salad avocado on cornbread and dark chocolate-filled donuts. Best chow-down: rigatoni mac and greens. Every last plate of that dish was taken and enjoyed. I still remember his cutting-edge treats for a Syfy event inside the American Museum of Natural History a few years ago. Marcus, don't let that long a time go by until your next main course at a media soiree.  Grade: 5 Jacks (Note: Cuisine ratings do not factor into the overall Jacks score.)

Overall Grade: 3.5 Jacks  Good presentation, venue and news with plenty of important information about cinema advertising consequences down the road. Without that opening video this would have been a 4 Jacks event.

A review of our Jacks rating system: