NewFront News and Views: Studio 71 Saved by the Rock 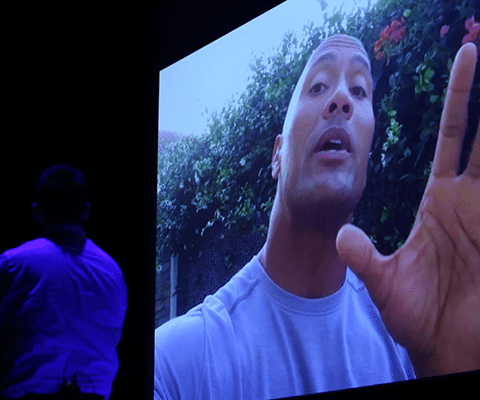 Studio 71 -- formerly Collective Digital Media -- works two sides of the digital street. One side produces original content. The other side produces original content which pairs YouTube personalities (or influencers because of their Millennial/Generation Y and Z fan bases) with national brands. What transpired at their NewFront Tuesday afternoon was a classic case of emphasizing one side way too much, the other side way too little. Along the way, the venture's big announcement -- one of the biggest of NewFronts '16 -- almost got lost. (Editor's Note: This report also includes brief reviews of NewFront events staged by Whistle Sports and The Economist.)

Venue: Skirball Center on the campus of New York University, a beautiful home for music, theater and dance performances more Upfront/NewFront players should check out. The space has excellent seating and technical handiwork. Starz showed up here last November for its "Flesh & Bone" miniseries screening. You also have a comfortable foyer where lunch was served before and after the presentation. A life-size company logo occupied most of stage right; talk-show setting with sofas stage left. Grade: 4 Jacks

Presentation: Things got off to a fun start with a YouTube DJ (live and on video) going weird over buzzwords from snackable content to immersive. Company chief executive Reza Izad used his time to acknowledge the value of on-and-off-camera talent in the digital world. "They have the craft of speaking directly to an audience down," he noted. "And that talent is creating their work on laptops and cellphones. (Because of them), audiences are not shifting to digital media. They're already there." From there, the show concentrated on branded entertainment collaborations over the last year...one after another after another the same case study fashion. Company exec sets up situation, shows video clip, walks to the sofas for debriefs with brand reps and in a case or two, the talent involved. The monotony on stage was broken up at one point by that DJ, returning to "interpret" an executive's deadpan rendition of new audience stats. With 10 minutes to go, I wondered if we were going to get anything other than case studies...like any idea of what's coming from this programmer in the months ahead. That's when "The Rock," in the great tradition of Mighty Mouse, came to save the day. Grade: 2 Jacks pre-Rock/2.5 Jacks post-Rock

News: Movie/TV superstar and entertainment entrepreneur Dwayne "The Rock" Johnson, who appeared via video from his L.A. backyard, will launch a new YouTube channel in partnership with Studio 71 this summer. Seven Bucks Digital Studios, named after Johnson's production company, will mix original scripted and unscripted series with short-form vignettes. "You want to be in business with us," Johnson said, pointing an index finger at the audience. You also wonder why this announcement didn't lead off the proceedings, the way Johnson did in person at Spike's upfront last spring, that time to kick off a multi-year unscripted development pact. On its own, Studio 71 has four new series in play: "The Text Committee" (scripted comedy with Vine star Matthew Espinosa), "Family Fun Day" (based on YT's "Family Fun Deck" videos), "Good Mythical Crew" (backstage with the cast/production team of the daily Web-delivered morning show), and "Coolest Thing I've Ever Made" (backyard inventors and the gadgets they invent). Grade: 3 Jacks

Overall Grade: 2.5 Jacks If not for Mr. J. and his big YouTube channel announcement down the stretch, this affair would have rated 2 Jacks, and that might be charitable. Call this the case of too many case studies and little learned about the original content ahead.

On the other hand, Whistle Sports put on a terrific "Hall of Fame"-themed event Wednesday morning at Altman Building that covered all the bases. The presentation itself was under 30 minutes, rapid-fire in delivery and supported by a nice collection of videos. What's more, Whistle offered an inventive way to demonstrate its content/advertiser partnerships: booths surrounding the stage area that attendees could check out at their leisure. The booths ranged from "World's Longest Touchdown Catch" (involving Pepsi and Papa John's) to "Dream Trick Shots" (Sonic) and "Drive" (Under Armour). Did miss the fantastic breakfast menu they offered last spring at Hard Rock Cafe near Times Square.

My choice for best NewFront 2016 rookie presenter is The Economist, showcasing its year-old digital video enterprise in fine fashion at The Standard Hotel on W. 13th St. Economist Films president Nicholas Minter-Green and his colleagues kept their comments brief and let their product speak volumes. Amazon Fire TV just introduced a 24/7 feed of The Economist's video series to its audience and Apple TV expects to launch that feed early summer. New series ahead include "Extreme Cities," "Startup Jungle," "Masters of..." and "The Disrupters." Everyone there also received a breakfast treat from Miami-based singer Regla Cumba, accompanied by guitarist and conga player. She and her backup duo can make your day.

Quick recap of our Jacks system:

Next up: NewFront odds and ends