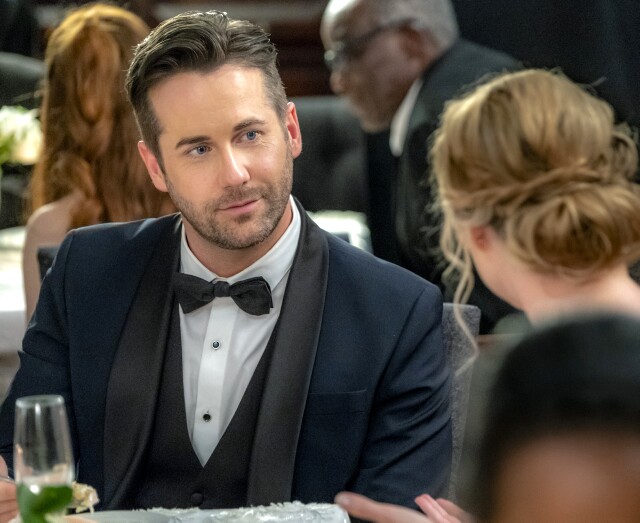 Canadian actor Niall Matter has become a permanent fixture of Hallmark Movies & Mysteries via his role as Nick Miller in the popular Aurora Teagarden series.  He’s also appeared in the Hallmark Channel movies Stop the Wedding (with Rachel Boston), Frozen in Love (alongside Rachael Leigh Cook) and this weekend adds another Hallmark credit with the June Weddings event premiere of Love at First Dance opposite Glee alum Becca Tobin.  Matter (pictured at top) plays engaged businessman Eric Gunderson, whose savvy business skills far outweigh his dance ability.  Desperate to deliver the perfect first dance at their wedding, his fiancé Adriana (Cecilia Grace Deacon) enlists dance teacher Hope Mays (Tobin, pictured below with Matter) to bring Eric up to speed – but when it becomes evident that the student and teacher share a real connection some important decisions need to be made.  “It's a really different story than others I've seen on Hallmark,” Matter told MediaVillage in an exclusive interview.  “What intrigued me was, how do we portray this in a Hallmark world?

“[We] didn’t want people to dislike the characters and have people [not] want our characters to end up together,” he continued.  “It's a tough tight rope to walk but I think we pulled it off.”

For Matter, the message of "doing what you love versus compromise” was also a draw.  "I started off in life doing what I loved, then did what I had to do for a while," he recalled.  "I was working a job I didn't want; it was a family thing working on oil rigs, so I could relate to Eric because of that.  He’s taking over a family business, very similar to my situation.  I walked away from it.  At the time my dad didn't understand; now he's one of my biggest fans and is proud of me for stepping out and doing something different with my life.  It's really important that people do what they love." 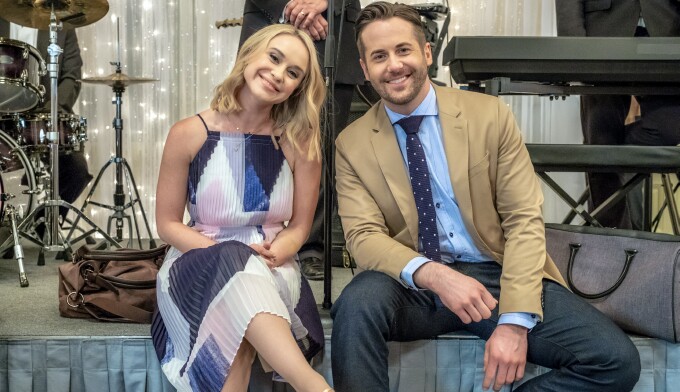 In fact, Matter was extremely fortunate to even be able to walk away from that family business and dance in this film.  Following a serious on-site accident, he almost lost his right leg and underwent months of physiotherapy.  "I was in extensive rehabilitation,” he explained.  “About eight inches of my quad muscle had ripped off my femur, and the muscle reattached in a different place.  It felt like a brand-new leg, the muscle memory was there, but kind of not.  It was really frustrating."  Matter did return to rig work until witnessing a co-worker lose both legs in an accident.  "That propelled me to decide enough was enough," he admitted.  "The signs were there and had I stuck with it I don't know if I'd be here anymore.  It can be a very lucrative profession but in the end, it just wasn't worth it.

"Life is much more fulfilling when you do what you love," he added. "I'm not saying that acting hasn't been tough because it does come with challenges and ups and downs, but when you're doing what you love to do, you're happy -- that's a good message within this film."  Seems Matter indeed landed on his feet with regard to his career change.  After appearing in a variety of series and guest-spots he found himself at Hallmark, and with Love at First Dance fulfilled a career dream.

"We filmed in Victoria B.C. which is beautiful, then actually filmed in New York,” he said.  “Actually in New York!  No green screen, it was real!  As an actor, you want to do something in New York, so to be in the city made it feel authentic.  It’s often a missing ingredient in films and I feel Hallmark and the producers really felt that and made sure they encapsulated it in this film."

Matter also got to brush up his ballroom moves prior to filming, which in no way prepared him for what was in store.  “Unless you are dancing all the time you use muscles that get quite sore,” he laughed.  “I hike and play sports, but filming something, you might spend hours on one scene.  So I’d basically be dancing all day long and was shocked at how sore and stiff I was throughout [the process].  Becca is a trained dancer, which worked out well because my character is supposed to be terrible, so I got my dancing in check, then had to throw it out and work with the awkwardness of what it is.”

Soon Matter will be back at work with Candice Cameron Bure on another Aurora movie for Hallmark Movies & Mysteries.  (Two more are slated for 2019)  And he hopes his fans enjoy seeing his darker side on the big screen in September with the release of The Predator (co-starring Sterling K. Brown). “I tend to be drawn to the bad boys in movies -- the James Deans and Marlon Brandos -- but I haven’t been able to do those kinds of roles,” he said.

He laughed at my suggestion that he might be the William Holden to fellow Hallmark star Paul Greene’s Cary Grant.  “I loved Humphrey Bogart, so [if Paul] is the Cary Grant of Hallmark I'll go with Humphrey,” he replied.

Love at First Dancewill be telecast Saturday, June 16 at 9 p.m. on Hallmark Channel.