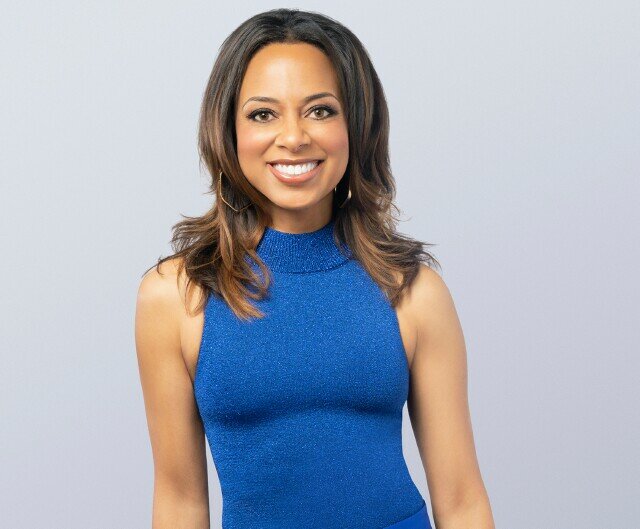 The year 2021 is shaping up to be a pretty good one for Nischelle Turner. In March, the longtime Entertainment Tonight correspondent was named the show's co-host, making history as the first woman of color to have that position. Now, with the premiere of CBS' Secret Celebrity Renovation, in addition to her hosting duties she gets to exercise her producing muscles, as well.

Throughout its 10-episode run, Secret Celebrity Renovation will welcome a variety of celebrity guests from the sports and entertainment industries, all wanting to give back to a special person who had an impact on their lives with a surprise home renovation. The celebrities featured include Paula Abdul, Wayne Brady, Eve, Jesse Tyler Ferguson, Anthony Ramos and Chris Paul, to name a few. (Turner, second from right, and Ramos, right, are pictured below with Jason Cameron, left, and Sabrina Soto.) "The idea was brought to me early and we developed and morphed it into what it became," Turner explained in an exclusive interview with MediaVillage. "I came in halfway through, but in bringing me on I was able to help kind of craft and have a hand in what the show looks like, and whose stories are being told. That's the stamp I'm putting on this.

"Besides hosting, which is really a cool feeling, we are telling these compelling stories of [famous] people we haven't heard before," she continued. "These athletes and celebrities that we look up to as larger than life, are telling their origin stories and pulling the veil back to be in their most vulnerable state with the people who raised them or gave them their start. [We] dig deep into who these people are, and I think that's what sets this [show] apart and makes it really special."

According to Turner, getting talent to participate was easy. "Some people we did reach out to, I have developed some good relationships over the 25-years I've been doing [interviews], so I made some calls," she shared. "But then Jesse Tyler Ferguson's husband saw an announcement about the show and sought us out to help his best friend, Kevin. When we heard Kevin and his family's story, we were like, 'Oh my God, yes!' It was, 'go big or go home.' The story is amazing, and the love Jesse has for his best friend and his family is fantastic. It's one of my favorite episodes, so I'm really glad that Jesse reached out."

While Turner was thrilled to start work on the show (which was due to commence production in 2020 but was shut down five days beforehand due to the COVID-19 pandemic), with the series spanning the country, and given the current state of the world, there were health and safety concerns.

"First of all, I looked like R2D2 walking through airports," she laughed. "I joke about it, but it's true. I have this show and ET, so there's a huge responsibility not to get infected. If I did, more than one production gets shut down. I'm a homebody, and I have been like a super-hermit, because I wanted to make sure that we stayed working as these projects are so important to me.

"Chris Paul was our first episode in Winston Salem, NC," she continued. "We were one of the first productions back to work and we didn't know how to handle it. We just masked and gloved up, got tested, retested and tested again. If I had to fly to a city, I'd quarantine the minute I got there. On set I was like the safety compliance officer, making sure everyone was safe. Lots of people's health was in our hands, and they all wanted to do great work. Working through a pandemic is very hard, yet we had a very successful, COVID-free shoot."

As a fan of the renovation show genre, Turner is ecstatic to be able to consider herself a part of it. "Just to be a part of this genre of TV is special for me," she said. "It's like a dream come true." She was also thrilled to have the opportunity to work alongside Jason Cameron and Sabrina Soto, who form the show's talented design team. "I have fallen head over heels in love with Jason and Sabrina," she declared. "The chemistry between them ... You think they're literally a husband and wife that we really feel should get divorced, but [they're] going to stay together. They're so funny and work so well together. We call them 'the dream team.' What's so great about this is they give viewers easy DIY tips. We have some huge transformations, but we show during the process how we just went to Home Depot and got these little things, and in five minutes you have a huge room transformation in your own house."

While the educational element of the show is a bonus, for Turner, it's the storytelling she found most rewarding. "I kept saying on every episode, 'I'm not gonna cry this time,'" she recalled. "Get your Kleenex ready! [The show] is a tearjerker in the best possible way, but I think it's what America needs to see right now. The fact we we're in such a crazy time, seeing these feel-good stories from start to finish will do something for all of us."

Turner admits while she loved stepping into the producer role, she has no plans to leave ET anytime soon. However, the opportunity did give her the chance for some self-reflection. "I've been thinking about Nischelle Turner 2.0 and what that career looks like," she shared in closing. "I do think that it's behind the camera. It's no secret that, unfortunately, we all age out of that on-camera thing at some point, and what's even more unfortunate is that for women it seems to happen more frequently. I will say the fact that this is all starting to happen for me at 46 is a testament to how we are starting to make a change. I appreciate that, and I welcome it with open arms."

Secret Celebrity Renovation is telecast Fridays at 8 p.m. on CBS.