Paul Greene Is the Cary Grant of Hallmark Channel 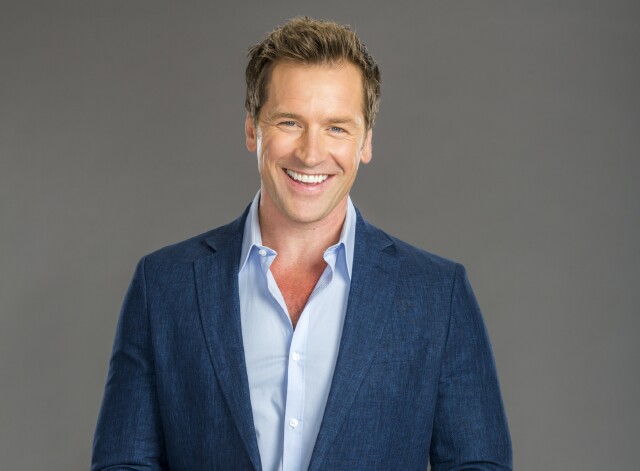 Actor Paul Greene considers himself a lucky man.  With five movies for the Hallmark Channel to his credit (and a regular role on the network’s series When Calls the Heart), the charismatic Canadian on Saturday night will add a seventh credit to the list with the premiere of My Favorite Wedding,co-starring Maggie Lawson.  All of this happened in just two years, giving Greene a reputation as the network’s resident Cary Grant.  He appreciates his enviable leading man status, telling me it’s all a part of a greater plan -- one he envisioned years ago.  “Believe it or not about 15 years ago I wrote down that this is what I wanted,” he recently told me.  “I got really specific with my goals and the kind of life I wanted to create.

“I’d written [my goals] down and reworked them over time,” Greene continued.  “Living a life that I love is one of my biggest priorities.  We all need to be reminded that we have a choice at how our life looks.  We all get in ruts or places we don’t want to be and sometimes all it takes is somebody to remind us we can live the life of our dreams.  It just takes a little bit of courage and organization along with writing down what you want.

“I did my first movie with Danica McKellar in 2015 and I had no idea what I was getting into,” he added.  “Now, two years later, it really feels like I found a home with this network.  They’re really loyal and an amazing family to work with.”

Greene attributes his happiness to his long association with Hallmark and the working environment there.  It’s a place he feels harkens back to the Golden Age of Hollywood studio system, where a roster of contract players like Cary Grant and Katharine Hepburn would routinely be paired on screen.  Needless to say, comparisons to Grant were something he’d heard before.

“Ron Oliver, who directed me in Perfect Match and A Christmas Detour [both in 2015] made me watch Cary Grant films,” he laughed.  “That was after saying, ‘Paul, I’m looking for a leading man like you [to work with] for a long time, one with that everyman charm like Cary Grant.’  That was such a huge compliment.”

Through Greene’s string of projects for the network he’s been afforded the opportunity of romancing some of America’s sweethearts; something he feels has no pressure.  “Romancing Winnie Cooper and D.J. Tanner?  In those moments [pressure] is usually the last thing I’m thinking about,” he shared.  “I work well under pressure, but I’ve never really thought about it that way, so it’s kind of funny.

“It’s quite the privilege to work with those young ladies for sure,” he said.  “I looked up to them on TV.  I’ve worked with Alyssa Milano, Danica McKellar, Candace Cameron Bure, Lacey Chabert, Heather McComb and now Maggie Lawson.  It’s rather a huge honor for sure.”  (Pictured below, left to right: Lawson, Christine Chatelain, Peter Benson and Greene.) 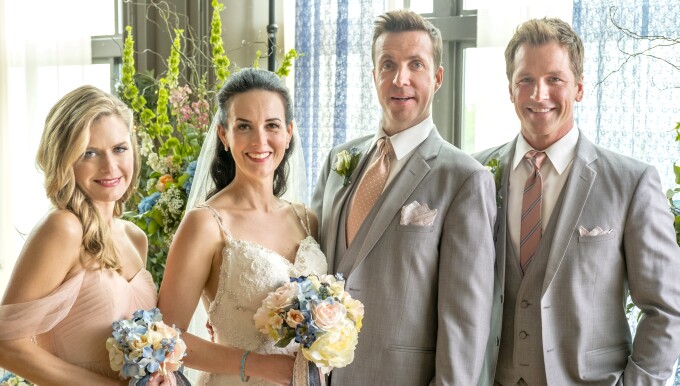 In his latest film, My Favorite Wedding, Greene plays Michael, a skeptical divorce lawyer and best man at his friend Jack’s wedding who’s enlisted to assist Tess (Lawson), an ambitious doctor and the maid of honor, in extinguishing all manner of pre-wedding fires.  Will Michael set aside his fear of commitment and Tess her career dreams to act on the spark between the two?  No spoilers here; but like their onscreen characters the chemistry between Greene and Lawson is palpable, making the “will they” or “won’t they” of this film all the more believable.

“Maggie and I had incredible on-screen chemistry and our director, Mel Damski, was fantastic,” he said.  “The first scene we shot was also the first time we actually met.  There was no table or chemistry test, it was basically just ‘Action! Hi, I’m Paul.’  But right away we fell into this quick, dry, witty banter that really set the tone for the whole thing.  About 10 seconds into it we were like, ‘We’re going to love working together.’”

In real life Greene considers himself to be a “super-romantic.”  Everything from the lights and music to the food, which he loves to cook, has to be perfect.  While his female fans will be thrilled by that news, the bad news is his girlfriend, actress Kate Austin, agrees.  “He’s incredibly romantic,” she told me.  “It feels like I’m in a romantic comedy all the time.”

My Favorite Weddingpremieres Saturday, June 24 at 9 p.m. on Hallmark Channel.