PBS at TCA:  Another Bad Day for Alexa 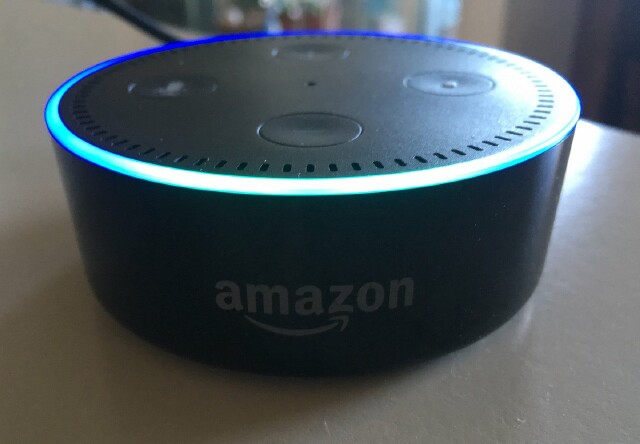 Pasadena, CA -- Amazon’s Prime Video isn’t participating in the Winter 2020 Television Critics Association tour, but its presence has been felt throughout, first on Tuesday during a panel for the upcoming Fox cyber-thriller neXt, largely inspired by unsettling real-life incidents involving Alexa, and even more dramatically on Friday during a PBS panel for the upcoming Frontline special Amazon Empire: The Rise and Reign Jeff Bezos.  Poor Alexa didn’t fare too well during that one, either.

On the PBS panel were Raney Aronson, executive producer of Frontline; filmmaker and correspondent James Jacoby (director of last year’s Frontline special The Facebook Dilemma); Stacy Mitchell, a researcher and co-director of the Institute of Local Self Reliance, and Frank Foer, a writer for The Atlantic.  They were all involved in this production and were clearly concerned about the ongoing insertion of Amazon into all aspects of life.

The session began with one critic who is already unnerved by the hold Amazon and, by extension, Bezos have on society, wanting to know how Amazon makes its fulfillment “magic” happen.  That was her word, which she used to describe the fact that she could order almost anything via Amazon and receive it the next day.

“It happens because there is a military-like precision and focus to their operations, which is both awesome and something to be feared as well,” Jacoby explained.  “It’s a company where they have brilliant engineering minds that have come up with systems to get you that package really quickly.  But it does come at a cost … to the labor force as well as to the environment and [other] factors that we don’t really think about when we order and need our dog food the next day.  We’ve all been really accustomed now to this convenience.”

“Ten years from now, do you expect [this documentary] is going to look too critical or too positive?” another critic asked.  “Or will Jeff Bezos have destroyed all copies of it?”

When the laughter died down, Jacoby replied, “I think that the film will be spot on in ten years. We don’t know where Bezos is going to bring us ten years from now.  A lot of people really don’t understand the infrastructure that he’s building, both the delivery infrastructure and the cloud computing.  Estimates [indicate] 40 percent of all computing in the cloud happens on Amazon web services.  That’s huge infrastructure.  I think that they claim Alexa has been embedded into more than 20,000 different devices.”

“It’s become such an unthinking habit in all of our lives,” Foer noted.  “When we have the itch to consume, the first place we kind of unthinkingly go is to Amazon.  That comfort we have with Amazon has allowed us to keep inviting Amazon further and further into our homes, whether it’s a speaker that’s listening to us all the time in our kitchen or bedroom or whether it’s having their cameras on our doorposts.  The essential question that the film is raising is the question of power.  When you have a company that has so cemented itself within (our) existence, that is a major contractor with the federal government, that is increasingly an entertainment powerhouse — I think a third of the streaming video market runs through Amazon -- what does it mean to have so much power concentrated within a single company?  Furthermore, what does it mean to have so much power harbored within a single individual?  That’s a big, open, looming question over the Amazon narrative.  Are we ultimately going to begin to wrestle with one man and one company’s power?”

Mitchell asserted that we have to deal with Amazon from both an economic and a democracy perspective.  “It can be hard to wrap our minds around Amazon because it does so many different things,” she said.  “They’re becoming one of the largest apparel makers in the world, just to name one.  But it’s really about the nature of Amazon’s power.  Look at other companies.  They try to dominate markets.  Amazon is intent on being the market.

“Most Americans, when they search for something online, no longer go to a search engine,” she added.  “Two thirds of Americans start right on Amazon.  What that means is if you make or retail anything, any kind of consumer good, if you want to reach the online market, you have to ride Amazon’s rails.  The same is true with its web services.  If you develop software, more and more of our computing processes are happening in the cloud.  If you sell to big companies, you have to be on AWS.  If you make a device that you want to have connected to the internet -- a dishwasher or a home security system -- everything is becoming more and more interconnected.  Alexa is going to be the operating system.

“What that means is Amazon has this godlike view of everything that is happening.  It can spy on not only us as consumers but all of its competitors, all of its suppliers, and it can strategically pick off parts of the business it wants itself and then it can essentially levy a kind of a toll or a tax on all the other players.   It’s a fundamentally different kind of monopoly problem than, say, Walmart’s power, and it’s one we’ve really got to face up to from the perspective of citizens.”

At one point the panel was asked about the impact Amazon is having on small shops and larger brick and mortar stores.

“I run the independent business initiative within the Institute for Local Self Reliance, and we did a survey last year of about a thousand independent businesses across the country,” Mitchell replied.  “Ninety percent of them said their business was being negatively affected by Amazon.

“We’ve talked to a lot of businesses that built up really successful websites and e-commerce sites themselves,” she continued.  “They had brick and mortar and they also sold to their customers online.    But four or five years ago they noticed a shift, and it was really the rise of Prime.  As more and more people joined Prime, they kind of defaulted to shopping on Amazon.”

Now, many independent businesses are caught in the Amazon web.  “For many of them, it’s a very bitter decision,” Mitchell said.  “If they choose to sell on Amazon, they give up a lot of their product knowledge and expertise, because Amazon is watching what they’re doing.  And they give up a big cut of their revenue, a pretty sizeable cut, and there’s no real competition.  There are no other platforms like that.  So, they’re sort of stuck.  If they don’t sell on Amazon, where else are they going to go?  Are they going to give up the online market?  We’re seeing a collapse in the number of small businesses in this country and also a sharp decline in the rate at which we’re forming new businesses.  In the ’80s we created about three times as many new businesses each year than we do now, and a lot of this seems to be about concentrated power.”

The show traces Bezos’ career from the mid ’90s to the present.  “You certainly do see kind of a physical transformation, and you also see his cultivation of this very goofy, affable image very early on,” Jacoby said.  “Some of his early employees talk to us about how that belied a sort of Napoleonic ambition.  The contrast between what early Amazon employees are saying as you’re watching footage of Jeff acting like a brilliant goofball, but really running a ruthless enterprise inside, is really strong.  Later on, the footage is used to [help] understand what Jeff was saying and thinking at times when we’re kind of more embedded in what the company was doing.  For instance, he talks a lot about his philosophy of failure and that he believes that taking big bets are the way to really win.  At the same time, we’re learning about his relationship with Wall Street, that Wall Street really invested in him and allowed him this leeway to fail, which is unlike, really, the leeway Wall Street has afforded any other CEO.”

Mitchell asserted that we have to deal with Amazon from both an economic and a democracy perspective.  “It can be hard to wrap our minds around Amazon because it does so many different things,” she said.  “They’re becoming one of the largest apparel makers in the world, just to name one.  But it’s really about the nature of Amazon’s power.  Look at other companies.  They try to dominate markets.  Amazon is intent on being the market.”

The Frontline special Amazon Empire: The Rise and Reign of Jeff Bezos will be telecast February 18 on PBS.