Podcast:  An Interview with Jack Myers on The Future of Men and Media 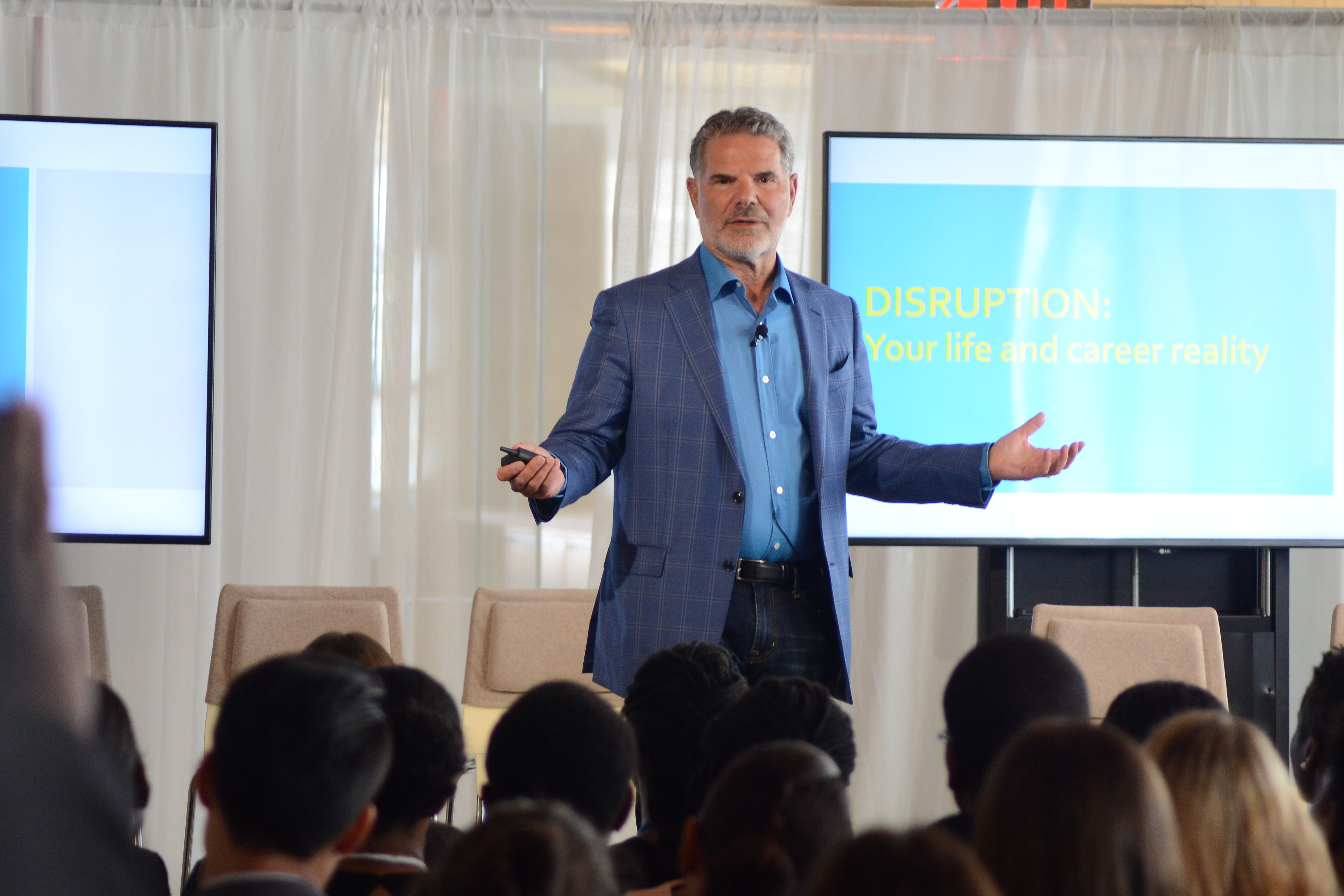 I consider this eleventh episode of Insider InSites “lucky 11” because I interviewed MediaVillage’s own legend and leader, Jack Myers.  When you hear more about and from our erudite founder, you'll see this is not hyperbole: Jack is, as his bio reads, “a visionary whose years of leadership in the media industry has garnered immense respect and admiration.  Jack has studied, reported and consulted on the impact of technological advances on culture, society, business ... and relationships.”  Jack, the author of five books, including one getting a lot of press now -- The Future of Men – frequently speaks on how society’s transformation is being driven by technology and led by the next great generation, the post-Millennials. We spoke about many of those areas in detail on the 30-minute podcast.  The following is an edited topline of that conversation, but please consider listening to the entirety below, or on iTunes, Stitcher or Google Play.

E.B. Moss:  Jack, let’s start with your personal past.

Jack Myers:  I didn’t have a television in my home until I was seven years old.  My parents believed in reading, but they also had a really big floor model radio and I was completely engaged.  But then, as soon as that television came into the home I loved everything about it.

At Syracuse I majored in radio/television.  I also wanted to do documentaries and did produce a few, which I'm very proud of -- one of which was nominated for an Academy Award as best documentary in 1996: Hank Aaron: Chasing the Dream. I partnered with Denzel Washington on that, and Hank Aaron, of course, and Turner Broadcasting.

In a lot of ways that passion for documentaries has segued over to a lot of the work I do now in the area of diversity, and the focus on helping young men make the transition from a very feminist society, in which they've quite comfortably grown up, to a society where we're now seeing the reaction to the realities of the negative patriarchy coming to the forefront, and appropriately so.

E.B.:  I think these sentences from the intro of The Future of Men are very telling about this book: "The last generation of traditional males is now in their late 20s.  The first wave of internet natives is just entering their adult years, heralding a new age of gender relationships that have different role models, a history born with the internet, and new guidelines for behavior."

Jack:  It’s a very forthright book about the realities of a culture of male dominance and the challenges women have been confronting for decades ... whether that dominance is financial, regulatory or physical.  Women are appropriately fighting back and rebelling, and even since the book was published a year and a half ago we've added a new subtitle: The Future of Men: Men on Trial, because men are on trial and many are being found guilty.  There are very few men -- when you go from the generation that's older than 27, 28 -- who aren't guilty of objectification, of misogyny, of sexism.  We are in the midst of an appropriate backlash that I think is going to continue.

But my focus is to make sure that we recognize that this younger generation of men grew up in homes where 50% or more of mothers were primary wage-earners or equal wage-earners in the home ... where their classmates are 60% female, and that’s what they're comfortable with.  And they -- for the large part -- should not be held guilty or responsible for the sins of their fathers or even their older brothers. So, we need to make sure we have organizations and processes in place that support them just as the women's movement has them in place to support women.

E.B.  How did this area of interest come about?

Jack:  It was really inborn because my mother started working when I was two years old and got her Masters at night.  She became, as a civilian, a senior accountant in the Air Force then one of their lead computer programmers.  I later realized my father had done the housework and was always supportive of my mom.

My interest further evolved while looking at the impact of technology on culture and business, and thinking we should be looking at this first generation to grow up with the internet and mobile – born in '95 and after.  I began researching Gen Z, looking at what impact they were having, who they were, how media impacted on them, and realized that it's a female-dominant, female-led generation that's increasing.  That led to questions like: “What's happening to the men?  Why are the men underperforming?  Why do we have a lean-out generation of young men and a lean-in generation of young women?”

[Young people] don't look at male/female.  They look at a spectrum of gender because they've grown up in a culture where those differences have been crossed over uniformly.  [Instead of] saying, "Men over here, women over here", it needs to be, "What can we do to build a better workforce and a better culture within our organization and recognize that we can learn from the young people who look at themselves as one, and not male/female?"

E.B.:  That's where we are trying to course correct now and need to find our center -- an environment that treats people equally and does give all people a voice.

Jack:  I'm afraid we're a couple decades away of having that nirvana.  In many ways, I think we're just beginning to see the negative output that has resulted from the harassment that's taken place over the last decades.  It's going to continue and it's going to get worse.  That’s going to create a lot of opportunities for women to move in to more senior roles.  But I do think we have to make sure that the stay-at-home dads are not considered out-of-work dads, but are also honored and respected.

E.B.:  When the Harvey Weinstein scandal was just breakingyou wrote a terrific piecefor MediaVillage saying many, many more dominoes are about to fall.  You called it.

Jack:  I think they're going to continue to fall. We need to begin bringing more solutions in to the conversation and also highlight those men and women who are doing positive things.  That's why I've created Advancing Diversity -- to honor those organizations, people and companies that are doing good things.

E.B.:  Let’s talk about that, because you're actually taking action, honoring people at a special event during the Consumer Electronics Show.

Jack:  The Advancing Diversity Honors during CES is just the beginning of a long-term focus on what is being done positively in our industry to provide best practices, to create recognition that there is a strong business model for advancing diversity and making organizations look more like society.

Diversity is not just gender or culture: there's neurodiversity, diversity of experience ...  We're expanding out the depth and breadth of diversity.  We criticize tech companies appropriately for lack of gender diversity or pay equality, but yet you walk their halls and you see goth, you see people with purple hair ... inclusion takes many forms, shapes.  Our goal is to create an organization that identifies and honors those taking positive steps to support diversity, from focusing on young people like our 1stFive, or our Legends & Leaders to honor experience and connect the generations.

E.B.:  We've talked about The Future of Men and our future as a society.  Let's talk about where you see the media world going.

Jack: I started working on the concept of MediaVillage in 2002, but it does reflect what I believe is the future of media.  That is, as data and analytics become more and more prominent, as the business of media buying/selling/planning moves more toward programmatic and automated models and further away from relationships, maintaining the village -- the media village -- will really be the solution for a lot of companies to maintain their relationships.  The idea of MediaVillage was to give everyone in the industry an equal opportunity to have a voice.  Not just a voice of what are their numbers, or what does the data say, but what do they think?  What are their realities?  What are the opportunities?  And to put it in a context where they each control their own environment, but yet they're a part of a village ... a community.

We do a lot of research to help companies understand what their perceptions are; we look at MediaVillage as being a perceptions engine.  But we've put the market research and insights together with content strategy and content creation.  Then our real secret sauce is the actual village that we've built, where each of our member companies have their own home where their thought leadership is archived, centered and becomes a destination.

Almost every major industry spends a tremendous amount of money on self-awareness ... on market research both in the consumer and in their B2B community ... on thought leadership content and communicating their executive point of view.  Then they spend a lot on advertising to get that message out there.  Well, B2B media has declined at a rate faster than newspapers.  The opportunities for community through conferences ... are too crowded.  On the research side, our industry incredibly under-invests on the B2B side.  B2B needs to be reinvented, and that's what we've done.

E.B.:  A future of media question:  How's the industry going to fare with all of this consolidation?

Jack:  The expansion that's happened over the last two decades is slowing.  Like the consolidation with Scripps and Discovery, Fox and Disney, and on the adtech and mar-tech side, we're going to go from about 15,000 companies down to about 500 in the next decade.  Of those, about 50 will actually be meaningful to the industry.  So, the winners and losers from the VC side are going to be significant and challenging over the next several years; the legacy media players and the digital media players are going to have to have some kind of reckoning on Wall Street.

E.B.:  A couple of years ago, when you first invited me to write for you and last year when you gave me this position, you said, "Hitch your wagon to this star. We're going places."  I think that I picked the man who knows how to pick the winners.

Jack:  And if I can get the last word, the colleagues that you work with here at MediaVillage are really a small and very exceptional and hardworking team.  It's really you and they who are driving it forward now.  I just step back and watch with joy and pleasure and excitement.