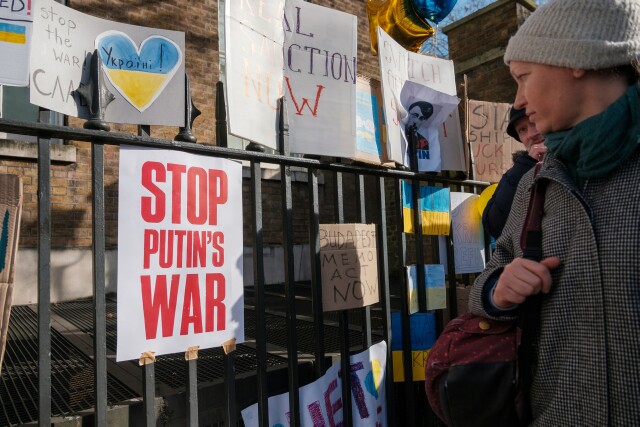 Vladimir Putin swept up the remnants of Russia's free press last week when his apparatchiks unplugged Echo of Moscow and TV Rain, among the last independent radio and TV outlets respectively, for reporting the facts about his invasion of Ukraine. Following orders, the Duma, Russia's parliament, is cementing censorship in place with a new law that criminalizes spreading "false news" on Russian military operations. For western news networks covering an increasingly authoritarian regime, Putin's travesties present a golden opportunity to hire real Russian journalists who can bring the facts to audiences in their homeland as well as abroad.

To describe Putin’s return to Soviet era propaganda and censorship as a bullet between the eyes of Russia’s independent news media isn’t an exaggeration. It’s also not a metaphor. To be sure, the Duma is adding a new legal veneer to justify arresting reporters who fail to toe the Kremlin’s official line. But if they make poor word choices, their risks go well beyond doing hard time in the gulag. In fact, reporters including some at Echo and TV Rain are fleeing the country. Forty-two Russian journalists have been killed since Putin took power in 2000. Twenty-six of them were murdered.

Shuttering the last independent news outlets and criminalizing factual reporting, of course, are only one front in Putin’s offensive against the troublesome truths about Ukraine. As his army invaded last week, the Russian Supreme Court did its part, throwing out the appeal from Memorial , a human rights group that has documented the victims of Soviet repression for decades. Memorial sought to overturn its shutdown as a “foreign agent.” Echoing Putin’s anti-Nazi rationale for his invasion, the Kremlin’s case against Memorial claimed it “rehabilitates Nazis” creating “a false image of the USSR” and Russia as a terrorist state.

As Putin’s blitzkrieg becomes his quagmire, the crackdown targeting Russian journalists, public access to international news, and even archival researchers will only get worse. Witness events last week. The Kremlin has blocked Facebook and Twitter as well as stepped up policing the Web. Putin’s propagandists also are hyping the scripts for their sock puppets on Russian state TV. Pointing the way for Tucker Carlson, their talking heads are breathlessly bannering Putin’s lies, including his nuclear threats, NATO’s menace, and the army’s success in demilitarizing as well as de-Nazifying the genocidal Ukrainians next door.

Many Russians know better. For example, thousands are responding to the Kremlin’s call to rally behind its maximum leader by demonstrating against the war or beating feet out of the country. Those rushing for tickets on departing flights and trains as well as sitting in traffic jams at the border include the best and brightest. Economic sanctions that are gutting their current lifestyles and hopes for the future are impelling the exodus, as are fears of conscription and martial law. Censorship or not, the fleeing Russians testify that at home the popular perception of events isn’t breaking Putin’s way.

The departures also are evidence of something else: a growing Russian audience for the facts and truths that Putin’s censorship czars are trying to deny. Ask BBC, Voice of America and Radio Free Europe/Radio Liberty . Blocked from disseminating news in Russia, all three news organizations are reaching audiences via apps that circumvent the Kremlin’s blackouts or thwart its surveillance by enabling anonymous Web browsing. VOA reports traffic at its Russian language web site has risen from 40,000 to 250,000 visits per day, with 20 percent coming through virtual private networks. VPNs have poked major holes in Beijing’s Great Firewall. One measure of Radio Free Europe/Radio Liberty’s success: worldwide sharing of Russian language stories from independent news outlets reportedly is outstripping sharing from state-run media.

When it comes to international reactions to Putin’s media crackdown, American news networks that are now limiting or shutting down operations in Russia need to hit the brakes. For one thing, BBC, VOA and RFE are showing them how to continue disseminating the news to Russian audiences within as well as outside the country. If they’re not following suit, they should be. More important, however, Russian journalism’s diaspora thanks to Putin’s repression presents an opportunity to make their news gathering better: hire the journalists who have left Russia and include them as part of the networks’ news gathering teams.

The benefits of their experience and expertise are obvious. The work of Russian reporters, editors, and producers would enrich the networks’ English language products on air, online, and in print. To be sure, expatriate reporters can’t easily tap information from their Russian sources in person. But encrypted messaging platforms, meetings abroad, and other information sharing techniques are news gathering tools that can supplement old-fashioned shoe leather and face-to-face contacts. And it’s fair to assume that after 20 years under Putin’s regime, Russian journalists have more than a few things to teach as well.

For the C-suites atop the broadcast and cable news networks, hiring émigré reporters or serving Russian language audiences undoubtedly don’t rank high as a necessary costs or a potential revenue stream. But with Putin’s aggression and its aftermath darkening the horizon, strengthening news gathering and reporting that can help inform Russians as well as Americans is more than a bottom-line concern. As witnessed by Putin’s repression of independent media in Russia, reporting that presents the facts matters to him. Strengthening journalism’s power to do just that should matter no less to the people who own the news.