Queen Latifah Evens the Score on CBS's "The Equalizer" 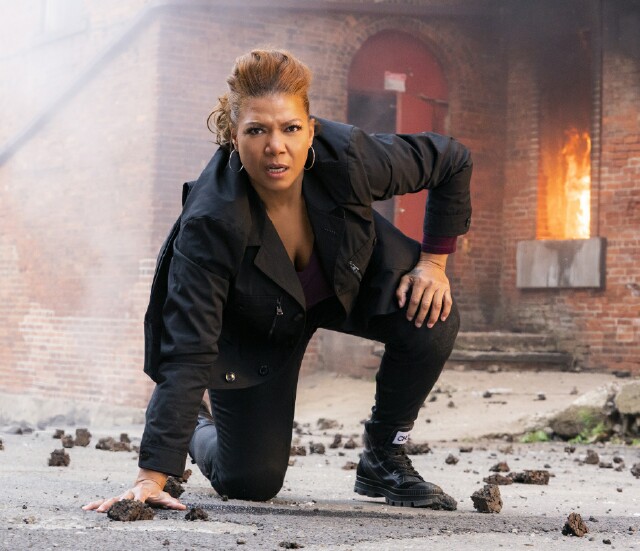 Words lose power when they're bandied about indiscriminately. Consider the overworked "awesome." When someone hands you a coffee you just paid for, that's not awesome. However, watching the sun seemingly dip into the Pacific Ocean exemplifies the word. Such is the way of "badass." It gets tossed around so much that any female who can lace up a pair of Converse and fix a steely gaze is heralded as a badass. Allow us to introduce you to a bona fide badass: Queen Latifah.

Playing the titular character in CBS' The Equalizer -- premiering in the single best timeslot of the year, right after the Super Bowl -- Latifah brings all that we have come to expect from her stellar performances. She's fierce as a fighter and as a friend, and she's on a mission of justice. In this one-hour drama, Latifah plays McCall, the same character from the 1985-89 television series starring the late Edward Woodward and the 2014 movie starring Denzel Washington. Instead of Robert McCall, however, Latifah is Robyn McCall.

McCall has a storied past as a special operative with the CIA. She's determined to help the underdog and not answer to others, which is a good thing because her approach is, in keeping with the franchise, unorthodox.

"What's most important to her right now is that she's done with all of that," Latifah said during CBS' recent virtual session for members of the Television Critics Association. "She's done working for the people who make the high decisions, the big decisions. She's done with the greed. She's done with the uber-powerful. She is all about taking what she has learned through the years, what she's mastered deftly, and using it for everybody.

"I like to fight as much as possible," Latifah revealed. Her dad had taught her how -- and more importantly -- why to fight. "[He] taught us all these moves and then told us never to use them unless you were defending your mother, your brother -- you were sticking up for someone who was being bullied in school, being abused in some sort of way."

In what should be a peaceful moment, McCall takes her teenager shopping for a special outfit. Delilah espies a yard of glittery fabric posing as a dress. It's one a hooker would wear, but only if she wanted to look obvious.

"I don't exactly like what this dress is saying," McCall says to Delilah.

"Yeah, it's saying, 'buy me,' just not in the way you're thinking," McCall replies. "Can't we find something with a little more fabric?"

McCall finds it easier to help a teenage girl in distress than deal with her daughter's moodiness. The pilot's plot centers around a visionary billionaire who hires henchmen to kill a teenage girl because she witnessed a murder. It's complicated, but what matters most is that the bad guys cannot take down McCall. She proves that handily in scenes that unfold in the space under Coney Island's Wonder Wheel. Under the boardwalk rides, McCall disarms and beats up four thugs.

Latifah, who is also an executive producer, acknowledged watching the original series as a kid. "What Denzel did with the feature films has been incredible," she said, adding how high he set the bar and how supportive Washington has been to her over the years.

"I'm feeling really good about everything that's happening with the show," she concluded. "I really think it's going to be something that people are going to be highly entertained by. They're going to ask questions about things afterwards. They're going to maybe have conversations amongst themselves because of some of the subject matter that we're tackling. And, hopefully, they'll start to say, 'Damn, Latifah was badass!'"

And that would just be using the word correctly.

The Equalizer will premiere after the Super Bowl on February 7. It will move to its regular timeslot -- Sunday at 8 p.m. -- on February 14.