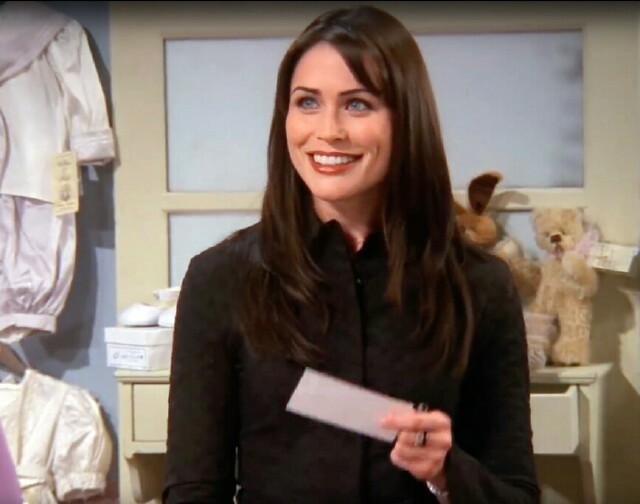 Season eight of Friends did a lot to increase the number of members in the ever-growing Friends of Friends  club.  It included Brad Pitt as Will Colbert (co-founder of the I Hate Rachel Green Club), Alec Baldwin as the over-optimistic Parker, Debbie Mazar as pregnant and profanity-spouting Doreen and Marla Sokoloff as Joey’s youngest sister Dina, to name just a few.  And with the pending arrival of Emma, Ross and Rachel’s baby daughter, the door was opened to many baby-related storylines that would continue into season nine, adding Freddie Prinze Jr. (as sensitive “many” Sandy) and Melissa George as “hot” nanny Molly.  As Emma’s impending birth approached in season eight, it provided Daytime Emmy-winning soap opera favorite Rena Sofer (General Hospital, The Bold and the Beautiful) with the chance to join the Friends of Friends.

In The One with the Cooking Class Rachel and Ross begin to stress over the birth of the baby.  Given that the only baby supplies they own were courtesy of Rachel’s “impromptu” baby shower, Ross suggests the duo head to a “really cute baby store” on West 10th St. to remedy the situation.  It’s at Little Stars that they encounter Katie (Sofer), an extremely pretty and flirty salesgirl.  She’s impressed that paleontologist Ross is “like Indiana Jones,” as they purchase almost everything in the store.

“That was a lot of fun,” Sofer told me of her Friends experience.  “A lot of times when you do a sitcom at night, you’re there for a long time shooting and re-shooting it, but with that show it had been on so long it went very fast.  No one really cared about anyone but the central cast members, so you would shoot your stuff and leave.

“It was one of the easiest jobs ever,” she continued.  “And David (Schwimmer) and Jennifer (Aniston) were so much fun.  It was a great experience.” 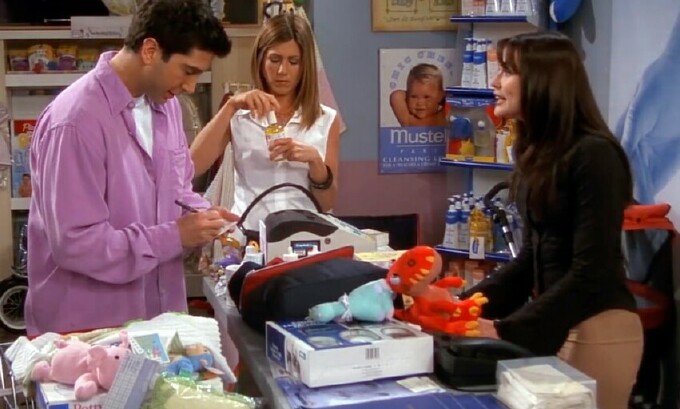 At the time Sofer was no stranger to the world of sitcoms, having appeared on Caroline in the City, Seinfeld, Just Shoot Me, Ellen and Spin City.  In addition to her work in daytime drama, she would also guest-star on Melrose Place and the largely underrated The Chronicleon SyFy (where she met her future husband, producer and director Sanford Bookstaver).  She also starred in NBC’s short-lived 2003 U.S. remake of the hit U.K. hit series Coupling, a show touted as a possible successor to Friends, which was ending in 2004.

As is true for many friends of Friends, having that distinction bodes well when it comes to new audiences discovering the episodes in which they appeared.  “I showed it to my daughter as she had started watching Friends,” Sofer said with a smile.  “She never watched Friends and had gotten into it, so I told her I did an episode and she asked, ‘Which one?’  I taped the one I was in so I could show her.  It's on all the time!”

Sofer admits it’s probably her portrayal of free-spirit Lois Cerullo Ashton on General Hospital that she is recognized the most for, along with her current role as scheming Quinn Fuller Forrester on The Bold and the Beautiful.  Despite the continual re-airing of her Friends episode, it’s not something she catches a lot.  “I don't tend to watch myself at all,” she shared.  “And I don't watch [Friends] very much as I tend to watch a whole lot of Law & Order, SVU and Criminal Minds.  I’m really into that kind of stuff and those three shows in particular.”