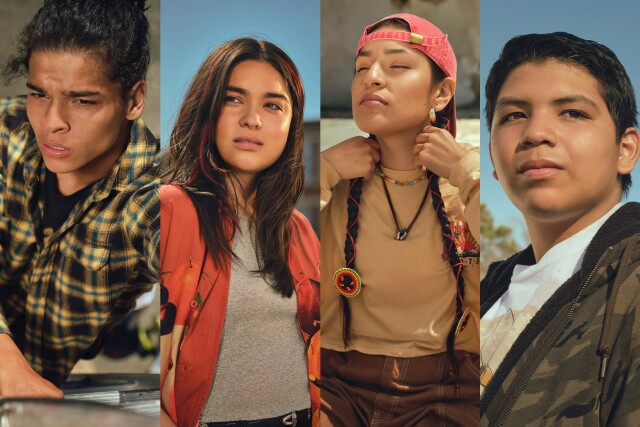 FX on Hulu's Reservation Dogs -- one of the most critically lauded new comedies of 2021 -- is back for a hilarious, heartfelt and, at times, heartbreaking second season. The series follows a group of Indigenous teens in rural Oklahoma led by Bear (D'Pharoah Woon-a-tai), Elora Danan (Devery Jacobs), Willie Jack (Paulina Alexis) and Cheese (Lane Factor) who aspire to leave home and head for the West Coast. The gang of four disbanded at the end of season one and are now forging their own paths in the world. The main cast was joined by co-creator, executive producer, showrunner, writer and director Sterlin Harjo for a panel last week during the 2022 Virtual Summer TCA Press tour. (Woon-a-tai, Jacobs, Alexis and Factor are picutred above, left to right.)

"You know, you spend your career making independent films that get seen by festival audiences and you get good reviews from critics that see [them], which are, like, maybe five," said Harjo. "And then, all of a sudden, you have a show that -- I mean, I thought people would like it, but it sort of struck a chord that I didn't know it would strike -- even with non-Natives. It was like this boomerang that was sent out to the universe, and it's been coming back to us, and I'm just very grateful."

Factor, the youngest of the main cast, made his acting debut with Reservation Dogs and reflected on the series' impact. "It's just been an amazing response; to hear so many positive things about it and coming back at us, and I wouldn't trade it for anything else," he said.

Woon-a-tai expressed similar gratitude for the continued increase in representation for Indigenous actors since the show launched last summer. "It opened up more doors and opportunities for me to express myself in," he explained. "And besides that, it made me realize that I have values now that I follow when I want to join an Indigenous-led set. Before, it wasn't really like that, because we never were here. So now that we are, it's changed how I'm going to step into filmmaking, especially Indigenous content."

An award-winning filmmaker herself, Jacobs joined the writers room this season and is credited with writing the fourth episode of season two, "Mabel." When asked about her experience working with Harjo and the writers, she replied, "Gearing up for the writers' room for season two, I was ready to assemble all my writing credits and get everything together. I was like, 'I'm going to really fight to get in the writers' room.' And then Sterlin was just like, 'Hey, you want to join?'

"It meant so much, to be a part of a writers' room where there's all Indigenous folks with varying degrees of experience and people looking out for each other and making sure that we're all learning on the way," she continued. Jacobs also shared how proud she was to use her first name -- Kawennáhere -- in her writing credit, as opposed to her stage name, Devery, which is actually her middle name. "When I'm able to contribute my voice as a filmmaker -- and a writer in this case -- to be able to use my name Kawennáhere -- the name that my family all calls me -- [means] leaving a piece of my heart and who I am in the work that I'm creating," she explained.

When asked if leaving his small town to pursue a creative career was a difficult decision, Harjo said it was similar to what the four main characters go through toward the end of season one when (outdated spoiler alert) they ultimately decide not to go to California.

"It was really always hard for me," he admitted. "To this day, there's a part of me that knows that I could have stayed and lived a certain life and that would be okay. Some of that's reflected in this show, you know, like that struggle of do you [stay] or do you go?"

It was at this point that Harjo's young son Ayo made a cameo appearance and joined his dad on-camera, to the surprise and delight of TCA members, who are rarely surprised by anything that happens during a Zoom session.

"It was a thing that I always struggled with, but I came to terms with it," he continued. "I think for me it was important to live near my home and always be involved as much as I can with the people [there]."

"Unlike Elora, I never wanted to leave," Jacobs chimed in. "It was something that I kind of had to do out of necessity for this work that I wanted to do. For me, it's also really important to get back whenever I can, and to stay connected because it's so much of who I am. Each of us on the show … have our own experiences of what home means, and where we come from, and our connections to community."

Similarly, Woon-a-tai, who grew up in the Toronto area, expressed that he thought he would never leave the city he grew up in, nor that he could pursue an acting career. He was completely unaware of Canada's ever-growing production hubs in Toronto, Vancouver and beyond. "I never knew that we had a humongous industry in Canada, and I had never seen any representation on the screen that looked like me," he said. "So, it never even crossed my mind to be an actor."

Toward the end of the panel, the group was asked about the many cultural Easter eggs and references to Indigenous lore that are sprinkled throughout both seasons of Reservation Dogs that non-Natives may not catch. A fan-favorite from season one was the Deer Lady that Big (played by Zahn McClarnon) met when he was a child.

"It's been a mythology and a story that has been important to a lot of our cultures and a lot of our tribes," Harjo explained. "A lot of Indigenous people have that story. I didn't want this Deer Lady to be a one-note caricature, a sort of mythological thing that comes in. When you meet her, I wanted you to know her history; I wanted you to feel that she was a character, and a well-rounded character, and has conviction, and there is a purpose to what she does."

Woon-a-tai and Alexis went on to mention other superstitions in Indigenous culture, like whistling at night, which is believed to lead spirits to follow you home. "A lot of us don't whistle at night," Woon-a-tai said.

"Don't whistle at night, man," Alexis added, shaking her head. "Don't do that. I think when I was a kid, one of the aunties were, like, 'Quit playing at nighttime or somebody's going to play with you.' But really, I think that they were just trying to scare us so we wouldn't play."

Harjo recounted a brief but hilarious moment in season one when the Rez Dogs visit someone's home and there's an owl ornament on their front porch, but we see it onscreen with its eyes blurred out. "In the case of the owl, for a lot of Native people, it can mean a bad omen, or death, a messenger of death," he explained. "So, out of respect for that, we blurred the eyes because we didn't want to have Native people seeing an owl every time they turned on the show."

"Some jokes are meant to be kept as inside jokes," Jacobs added with a laugh.

Season 2 of Reservation Dogs is streaming on Hulu with new episodes every Wednesday.