When it comes to his experience becoming a Friend of Friends, actor Robert Gant has nothing but fond memories.  Best known for his work with Hallmark Channel, and a stint on the Showtime series Queer as Folk, Gant had only a smattering of film and television guest credits to his name when in 1997 he landed the role of sensitive kindergarten teacher Jason in The One with Ross’ Thing (Season 3, Episode 23), whom Phoebe two-times when she’s unable to decide between dating him or hunky fireman Vince (Matt Battaglia).  “My agent called and said, ‘Do you have any interest on being on a show called Friends?” Gant recalled when asked about the role.  “First of all, I do remember reading for the [Friends] casting director for the first time.  I was really working out in those days, and I still do, but I was in crazy good shape -- those abs were absurd.  The character had a physical bit, so I remember lifting my shirt in the audition and wiping my brow. 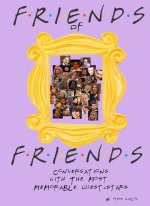