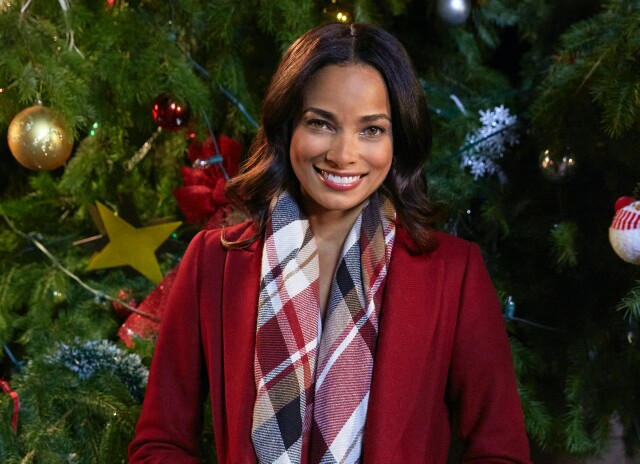 Like many of us, as the country began to shut down in March of this year due to the COVID-19 pandemic, Rochelle Aytes (pictured at top) was left scratching her head as to what might happen next. She was in the middle of a shoot in North Carolina when that production shut down for two weeks and didn't resume. Feeling a little dejected, she did what everyone did: made the best of it, remained positive, stayed as healthy as possible and spent a lot of time watching the news and hanging on Twitter. However, her mood changed for the better in the summer when Hallmark Channel reached out to her with an offer to film A Christmas Tree Grows in Colorado, her first film for the network. "I got a call from my agent and manager saying I was offered a role in a Hallmark movie," she beamed when MediaVillage spoke with her exclusively about the project. "It was awesome! I read the script and I loved it.

"It was definitely an out-of-the-blue thing," she continued. "I was just at home doing the same old thing, every single day, got that call and then got very excited. I was little nervous about traveling (to Vancouver) and how it was going to work. But Hallmark made it happen. I was a little down and depressed, but I remember reading the script and being taken to another space in my head. These characters were so happy, accepted -- and building snowmen! All of these fun, lighthearted things. I thought to myself, 'I need this; it would be a very therapeutic and positive thing for my spirit right now.'" 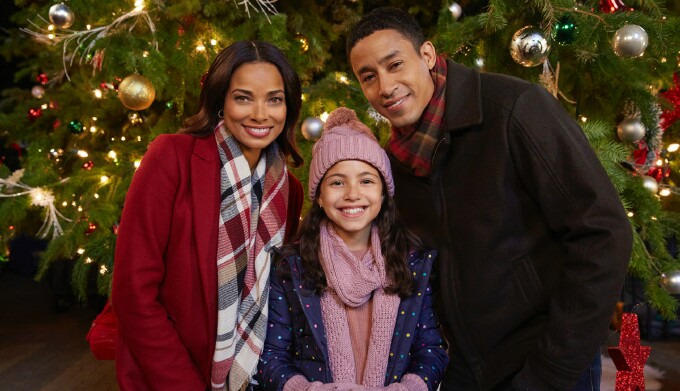 In the film Aytes plays as Erin Chambers, the director of community development in Brooklyn, Colorado. In an effort to boost tourism, her job this Christmas is to find the perfect tree for the town square. When she discovers it growing on the property of local firefighter Kevin Snyder (Mark Taylor, above right), and his adopted daughter Claire (Grace Sunar, above center), she's thrilled. But Snyder doesn't share her excitement when Erin mistakenly posts a photo of his tree to the town's social media account instead of her own, and feels he's being railroaded into donating it. Left with securing the deal, Erin and Mark start spending time together, and as the two constantly butt heads, Erin bonds with Claire. But after what looks like the ultimate betrayal on Erin's part, Christmas in Brooklyn Square might have to go tree-less.

While Aytes admits to sharing similar traits with her character, the role did provide some challenges. "She's definitely likeable and even more upbeat than I am," she laughed. "I mean I'm fun, but I can be a little bit more low-key. I felt like I had to bring extra energy that I don't normally have all the time. But for sure I felt like Erin was very similar to me in that she loves kids. I don't have kids, but I love them. Growing up I thought if I wasn't going to be in the performing industry, as I used to be a dancer, I was going to work with children in some way. So, anytime I get to be a mother or work with young kids I absolutely have to be a part of it."

The onscreen friction between with co-star Taylor also required some effort. "That's where you put on that acting hat and just focus on a scene," she laughed. "It was so fun working with him. As a person Mark is really sweet and hard-working, and we both wanted this be the best possible film that we could make and be as honest as possible. We would run our lines to feel comfortable and try to bring that chemistry on screen. Hopefully we did that. And Grace … she's a sweetheart and so professional. I just had the best time on- and off-screen making her laugh, and when her mom wasn't around, making sure she was comfortable. Especially on those really hot days when we wore coats and it was like 80 degrees on set." 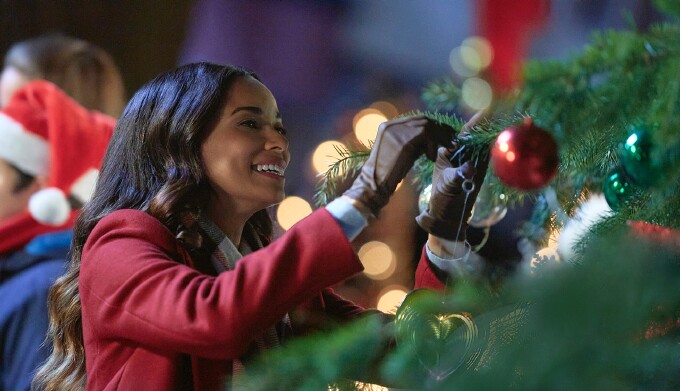 Aytes admitted there were some other major draws to the project. "One thing I loved about this film was the diversity and inclusivity," she said. "For people to get to see themselves -- to feel seen, heard and validated -- is so important."

Another aspect of that was the inclusion of adoption to the story. "That also really drew me," she added. "Reading it, it gave the storyline so much more depth. Again, it's super-important for people to see themselves and to remember that there are a lot of kids out there who need to be adopted and deserve love. If this can inspire one person to go out and think about it that would be awesome."

With the movie's relationship twists and turns, Aytes is hoping viewers will sit back and enjoy the ride, as not judging a book by its cover is also a big part in the storyline. "That's something fun for the audience," she said in closing. "Not everything is what it seems, and while Erin is a little uncomfortable with something going on [in the story], the reveal is a breath of fresh air that's also attached to the inclusivity we're talking about. It's nice to have those twists and turns, and not be predictable. So, sit down as a family and watch to find out."

A Christmas Tree Grows in Colorado will premiere Tuesday, November 24 at 8 p.m. on Hallmark Channel as part of its annual Countdown to Christmas programming event.