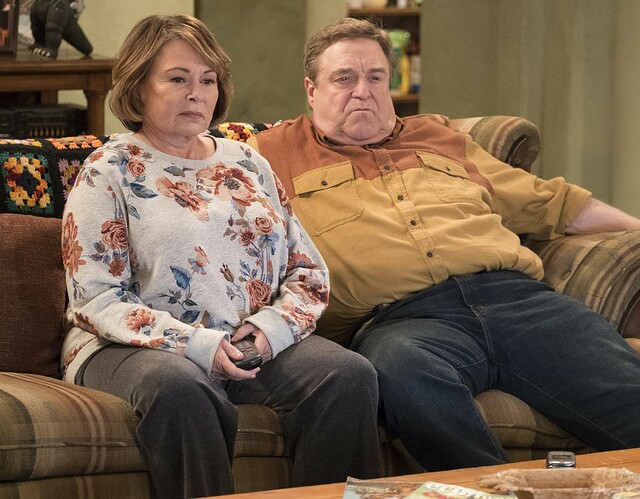 On Tuesday, May 29, at 1:45 a.m., Roseanne Barr used her Twitter handle (@therealroseanne) to respond to a thread about Valerie Jarrett, the former Senior Advisor to President Obama.  Barr’s tweet read as follows: “muslim brotherhood & planet of the apes had a baby=vj.”

Now we all know that Roseanne Barr has never been a stranger to controversy. This woman has been using inflammatory statements and divisive rhetoric as the water wings with which she remained afloat in this ocean of relevance we call pop culture for years now.  Flip through her catalog and you’ll find hits like 1990’s “Disgracing the National Anthem” and 2018’s “That Time I Called a Parkland Shooting Survivor a Nazi.”  And who could forget her summer 2009 joint, “Let’s Take Photos Dressed Like Hitler… In Front of an Oven”?

Of course, with the recent revival of her self-titled show being such a hit with MAGA hat wearers everywhere -- Roseanne pulled in 18.44 million viewers during its two-part premiere – networks and advertisers alike were willing to turn a blind eye to her antics.  It seemed, to the chagrin of many, that the normalization of hate and ignorance-based tenets she facilitated via her platform would continue unchecked as long as she remained a viable financial asset to her employers.  At least that’s what we thought.

Within hours of the tweet about Jarrett the hammer dropped on Barr. “Roseanne’s Twitter statement is abhorrent, repugnant and inconsistent with our values, and we have decided to cancel her show,” said ABC Entertainment President Channing Dungey in a statement.

Sara Gilbert (who plays, erm, played Rosanne’s daughter Darlene on the show) said, “Roseanne’s recent comments about Valerie Jarrett, and so much more, are abhorrent and do not reflect the beliefs of our cast and crew or anyone associated with our show.  I am disappointed in her actions to say the least.” Other members of the cast and crew expressed similar sentiments, including Wanda Sykes, a consulting producer on the show, whose response on Twitter was simply, “I will not be returning to @RoseanneOnABC.” A fan of the show tweeted to actress Sandra Bernhard, “So sad we won’t see you and the rest of the great cast of Roseanne now” to which she replied, “Well, there’s only one person to blame.”

The backlash actually elicited an apology from Roseanne, who said herself in a tweet that the joke was “in bad taste” and that she “should have known better.”  No shit, lady.  She also stated she’d be leaving Twitter, but we’ll see about that.

So what does this all mean?  I’m not really sure.  People like Barr aren’t new. Neither are people like Trump.  The one thing that seemed to have changed in recent years was how emboldened those types of people became.  The revival of Barr’s sitcom was an indication that the underlying ignorance and prejudice driving most of the show’s new fan base had a stronger foothold in the American household than anyone non-straight and/or non-white could stomach.  Ignorance is dangerous, and when supported and seemingly justified it can make the foundation for violence and verbal abuse that much more solid.

None of that mattered before Barr’s little slip up, though.  Roseanne was raking in the dough, and prior to this debacle had already been greenlit for another season.  Really, the reason everyone is so surprised that this actually happened is because of what a huge part of ABC’s primetime line up this show was supposed to be moving forward.  To me, however, it still begs the question: Exactly how commendable is this move by ABC?  I’m not questioning whether or not it should’ve happened.  Of course it should have, but I can’t ignore the part of me that’s saying, “It’s about damn time.”

Either way, for the first time since a reality television star became the President of our country a couple years ago, it feels like a new baseline has been set. Maybe now other major networks will be emboldened in a positive way to draw an inerasable line in the sand; one that separates human decency and dollars, rhetoric and revenue, and clearly defines which ones are more important. Of course Roseanne is sorry now.  She just lost her job, and cost all of her coworkers theirs, as well.  I’d be sorry too, but the fact is, she said what she said, and now she has to deal with the consequences. As a champion of free speech, I’m not saying that she doesn’t have the right to think and say whatever she wants.  Of course she does, but she – like all of us -- should still be held responsible for it. Today, she was.

Freedom of speech is not freedom from consequence.