Shatner, Winkler, Foreman and Bradshaw Band Together for a Star Trek 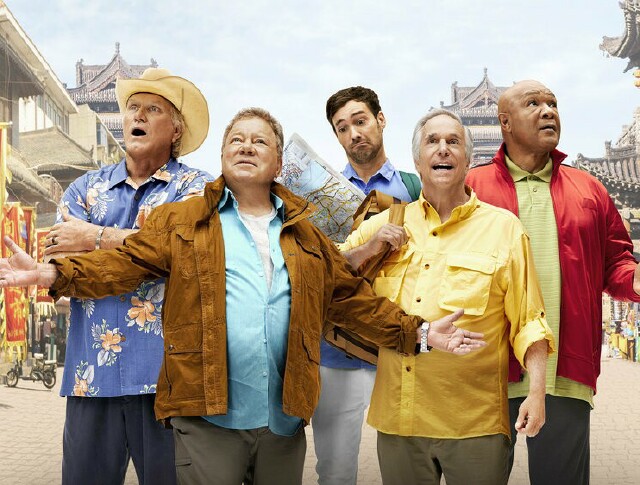 Ever wondered what it would be like to go on vacation with a pop-culture icon -- or four? NBC’s funny new travelogue series “Better Late Than Never” should answer any questions. In the series, premiering tonight at 10 p.m., comedian Jeff Dye plays tour guide to four of the biggest legends from the worlds of television and sports as they navigate their way around Asia. Dye (pictured above center) wasn’t sure what to expect when signing onto this "star trek," but when traveling with (left to right) a Football Hall of Famer (Terry Bradshaw), the original Captain James T. Kirk (William Shatner), the Fonz (Henry Winkler) and a celebrated boxer/griller (George Foreman) he assumed that their egos might prove problematic. Never assume anything, as the saying goes.

“I thought to myself, they might be divas or hard to work with,” the comedian tells MediaVillage. “I never saw Terry Bradshaw play football because I am 30 years old and he's like 67, so I only know him as a broadcaster. But getting to meet them, I was taken aback by how they were just regular men. They really were like dads. It's like I gained four dads. The only diva moments were where all of us would be divas.”

While the series does depict four friends globetrotting, in reality only Winkler and Shatner had any sort of history. Still, the four do make quite a team. “Bill Shatner I knew a little bit, but I’d never met George before,” says Winkler, who is also the series’ executive producer. “George came in and sat down and within thirty seconds I knew that this guy should absolutely be on the trip with us. He’s insightful and smart, like a fox. He's also an Olympian napper. That’s something I would love to have learned from him.”

“George, for me, was the most remarkable,” adds Shatner. “His history -- the evolution of a street kid to somebody who I think of as the essential Buddha. He emanates rays of wisdom, kindness, singleness of purpose and knowledge of who he is and what he does.” For Shatner, it was also the lure of boldly going somewhere he’d never gone before that had him signing up for the show. “I've never been to Japan,” he laughs. “The tickets were too expensive and nobody else paid for it, so I just never went [there].”

Thankfully the on-screen chemistry between the four worked and any preconceived notions Dye, Winkler or Shatner might have had of their traveling companions were quickly dispelled. “Terry I didn't know at all," recalls Winkler. “He’s gigantic in every way, from his personality to his dearness; his emotionality, he's just a great guy. He's wise and generous of spirit." And, apparently, very strong. "He put his arm around me on a mountaintop so for a week I walked with a hunch," Winkler adds. "He needs to hold up a sign when he’s going to show affection.”

“I knew nothing; it was like, 'Who are they?'” Shatner laughs. “I knew the two great athletes and Henry was so popular, but I really didn't know anybody. I’d never even heard of Jeff, so going in and spending a month with them?  Especially locked up in an airplane, a railway, a room?  You're locked [together] on camera so what happens if you don't like the guy? And on camera, you can’t hide that stuff because your eyes give you away.”

The first stop on the hilarious trip is Tokyo, with six cities in four countries highlighted over the next four weeks. Shatner is already looking forward to the next trip. “There’s talk of it and it sounds great,” he shares. “We learned a lot. There are situations that you don't know how to handle, but after having done it, I now know what works and what doesn't work.”