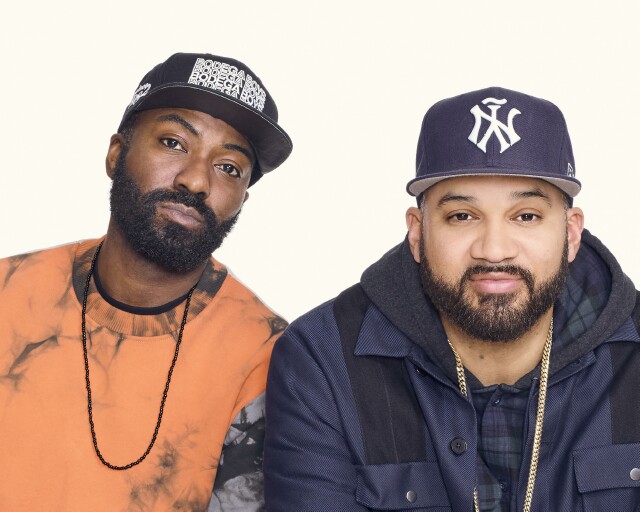 Pasadena, CA -- No one has more fun than Desus Nice and The Kid Mero -- and as we learned at their panel during Showtime’s morning at the Winter 2019 Television Critics Association tour, their humor is infectious (much like their laughter, especially Mero’s).  The duo has made a career out of riffing on what guys shoot the breeze on -- sports, politics and all forms of life in between -- as The Bodega Boys.  Their comedy, which has brought them millions of fans via YouTube and their former series on Viceland, heads to Showtime beginning Feb. 21, where they will be hosts, executive producers and writers of a late-night weekly talk show (once again) titled Desus & Mero.  (Read Ainsley Andrade's review of their Viceland show.)

As with their Viceland series, they can’t even be sure what they will discuss on the day of taping.  The current political climate can bring anything, and these two remain open to whatever that may be.  It’s all spur-of-the-moment conversations.  Unlike other shows, they don’t bother with publicists’ talking points.  Sure, they’ll let someone plug a new movie or show, but potential guests should steer clear if they can’t handle the spontaneity of it all.

“Once people realize we are not trying to throw them under the bus, they are kind of friendly,” added Desus, whose original name is Daniel Baker.

The network had been looking for a late-night talker, but one that was not cut from the same cloth as all the others.  “Frankly, we were never that excited about putting another guy behind a desk,” Gary Levine, Co-President (with Jana Winograde) of Entertainment at Showtime.  “But then came Desus & Mero, and suddenly we knew exactly what a Showtime late‑night talk show could be.  These guys are authentic, surprising, funny, hip and perceptive.  They can talk politics with politicians, they can talk ball with ballers, they can swap stories with the stars, but they are always singular, always real and always funny.”

The two have the sort of banter and ease that comes with many years of friendship.  They met at LaGuardia High School in the Bronx, their hometown.

“It was summer school,” Desus noted.  “Not because we are dumb but because summer school has air conditioning.”  Not every room in the school did, they later clarified.

The two are chill with reporters, not always an easy task in front of 200-plus people seated behind open laptops, busily tapping away.  Yet it took them no time at all to own the ballroom at the Langham Pasadena Hotel -- site of this year’s winter TCA tour -- as they explained how switching from a Monday-Thursday format (on Viceland) to a once-weekly show will allow them more time to finesse content.  For the first time, they have a writing staff, and [the writers] are friends who get “the Bodega Universe,” Desus said.

For those who have never visited a bodega, they are small, independent shops in New York City with way more character than chain convenience stores, often have cats prowling the aisles and sell patrons anything from milk to single cigarettes.  They are often the hubs of their ‘hoods, crammed with snacks that have shelf lives longer than plutonium, and dot areas that are often supermarket deserts.

One critic asked if there are bodegas they avoid because “you know you’re going to get food poisoning the minute you walk through the door?”

“I was raised eating street meat in New York,” Desus replied.  “I can’t get food poisoning.  I once ate a Chicken McNugget off the 6-train platform.  I’ll be okay.”

“My stomach is made out of Vibranium,” Mero added.  “I’ll be fine.  I ate Newport cigarettes for a year straight.”

Desus still lives in the Bronx, but Mero (whose birth name is Joel Martinez) has four kids and moved to New Jersey.  Still, they are both pure Bronx in attitude, and they both worked other jobs before finding success.

“A couple years ago, Desus was working on a magazine and I was working at a school,” Mero recalled.  “Eleven-year-old children were telling me to fellate them.”

The guys have no plans to change their outlook.  Their dream guest for the new show is former President Barack Obama.  Ideally, they will interview all the hopefuls running for president in the next election.  They would also love to chat with President Donald Trump, though it’s admittedly a long shot.

Then they let themselves be serious for a moment, as they talked about how incredibly difficult it is to live in poverty.  The reason these two resonate with people across the country is that although they are pure NYC, theirs is the story of anyone who had nothing handed to them.

They keep it light but tap into important issues.  “Basically, we like to keep our ear to the streets and see what the people are talking about,” Desus said.

After their panel they spoke privately with a fellow proud Bronxer -- me!  My street cred was instantly established when I spoke of streets, subway stops and schools.  When I mentioned my childhood address, I received fist bumps.

The D&M rundown:  They still eat bodega food.  They still root for the Yankees.  And they are lightning-quick.  Their success with their podcast (now on episode 144) and their Viceland show has made them celebrities.  People are surprised to see them walking around the old neighborhood, and they've been asked where their security is.  They laugh.  They don't need protection.

“We just did a five-borough tour,” Desus said.  It was their first time in the city’s most conservative borough, Staten Island.

The two have a book coming out from Random House this year, and plan to do additional voiceover performances, after enjoying working on the American-Japanese aminated series Neo Yokio, seen here on Netflix.  They have also become friends with Yankees’ pitcher CC Sabathia, which pretty much defines success for a couple of guys from the Bronx who still love bodegas.

Their session capped a strong morning of TCA presentations by Showtime, which included the first tour appearance by new co-presidents Levine and Winograde; important announcements (Shameless has been renewed for a tenth season even though co-star Emmy Rossum has left the show; long-running hits Homeland and The Affair are about to begin their final seasons); a preview of the upcoming limited series about Fox News founder Roger Ailes, played under a mountain of utterly convincing makeup and many pounds of prosthetics by Russell Crowe; and highly engaging sessions for Black Monday (with Don Cheadle, Andrew Rannells, Regina Hall and Paul Scheer) and City on a Hill (with Kevin Bacon, Aldis Hodge and Sarah Shahi).

The opinions and points of view expressed in this commentary are exclusively those of the author and/or subject(s) and do not necessarily represent the views of MediaVillage.com/MyersBizNet, Inc. management or associated bloggers..