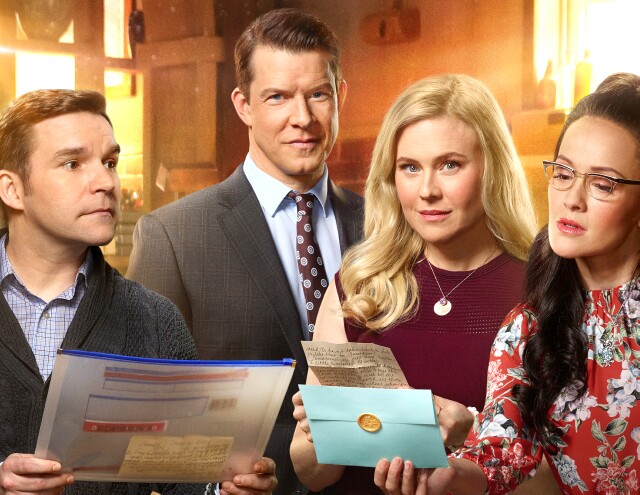 Hallmark Movies & Mysteries intrepid quartet of civil servants known as the POstables return Sunday night for a new installment of the Signed, Sealed, Delivered franchise titled Signed, Sealed, Delivered: To the Altar.  This time the foursome takes on the case of a vintage wedding dress rendered undeliverable after a conveyer belt mishap, and with only stamps and a note as their clues the case proves quite challenging.  Having told 22 tales to date (12 movies and 10 series episodes), it seems fans can’t get enough of the heartwarming franchise created and helmed by Martha Williamson (Touched By An Angel), which began as a two-hour movie, evolved into a series and then returned to the movie format.

When the series ended stars Kristin Booth (Shane) and Crystal Lowe (Rita) had no idea what might become of their beloved characters.  “I wasn’t sure how it would play out,” Booth (pictured at top, second from right) told MediaVillage during a recent joint interview with Lowe (top right).  “But I’m glad we went back to the movie format because of the issues we get to deal with, and Martha’s writing gives us more opportunity to tell the story in two hours.”

Indeed, despite its levity To the Altar tackles two important issues head-on while not browbeating its audience.  Both Lowe and Booth agree the secret ingredient to the success of movies lies within its writer/producer Williamson (who took time from her busy schedule to catch up with her stars during our interview).  “Martha is so skilled in presenting an issue people sometimes don’t really want to talk about in a way that makes them sit back and go … ‘oh?’” said Booth.  “She never preaches to you.  She lets you come to the lesson.”

For Booth, tackling the issue of mental illness in the movie hit close to home.  “I’ve dealt with mental illness in my family and have suffered from depression and anxiety for years,” she shared.  “Mental illness is hard, a broken ankle or diabetes people know how to treat.  [Being unable] to get out of bed [with depression], the response is, ‘Pull your bootstraps up and do it.’  If you haven’t personally experienced it or been close to someone that has it’s very hard for people to understand.”

Lowe was happy to see called to the issue of adult virginity (which recently was made newsworthy by 26-year-old The Bachelorette suitor Colton Underwood’s revelation he was a virgin), as her character’s fiancé Norman (Geoff Gustafson, pictured at top left) uses a family friendly euphemism to confide in Oliver (Eric Mabius, second from left) that he is in a similar situation.  “I loved when I read that in the script,” Lowe said.  “For an adult watching it they might be able to feel they’re not alone and finally they have a voice.  This is an issue I like because it’s something guys might tease each other about, and in the context of the movie it’s explained compassionately and with understanding by Oliver.  That’s what makes his relationship with Norman so special -- there’s no judgment.  I love that moment in the movie.”

Much has changed for the POstables during the run of the franchise.  Rita and Norman plan to be wed.  Rita and Shane have become inseparable besties.  The budding romance between Shane and Oliver is now in full bloom.

Like their characters, both Lowe and Booth admit being a part of the heartfelt movies has provided personal evolution.  “It’s true, playing this character has changed me as a person,” Booth admitted.  “I feel more of a sense of empathy and understanding for others.  I have a greater sense of faith in something bigger and that’s very comforting.  Martha has become such an incredible mentor, friend and boss.  When I recently executive produced something for Hallmark I called her daily for advice!  I truly love her as she’s changed my life.”

“The show has changed a million things for me,” Lowe concurred.  “In my 20s I was a model and my values were about how I looked.  I thought maybe that was all I had to offer.  I remember the first photo shoot for Signed, Sealed, Delivered; all I had ever wanted was to do a big photo shoot with execs behind the monitors watching.  I got that on that shoot [as Rita] and couldn’t believe that was how I looked and was dressed!  That was a huge moment for me.  I realized I could offer more and it wasn’t all about my regular look.”

There has been no official word regarding another installment of the franchise, though both actors are hopeful it will happen and close the doors opened in this one.  “I really want the vintage glasses Rita wears,” Lowe laughed.  “There’s only one pair and at the end of this movie I looked at them and said, ‘I don’t think these are ready to come with me.’  So, I left them with wardrobe as I feel like it’s not over.”

That’s a sentiment echoed by Booth.  “I do feel the POstables will be back,” she said with a smile.

Signed, Sealed, Delivered: To the Altarwill be telecast July 15 at 9 p.m. on Hallmark Movies & Mysteries.