Stephen Amell on the Emotional Final Days of The CW's "Arrow" 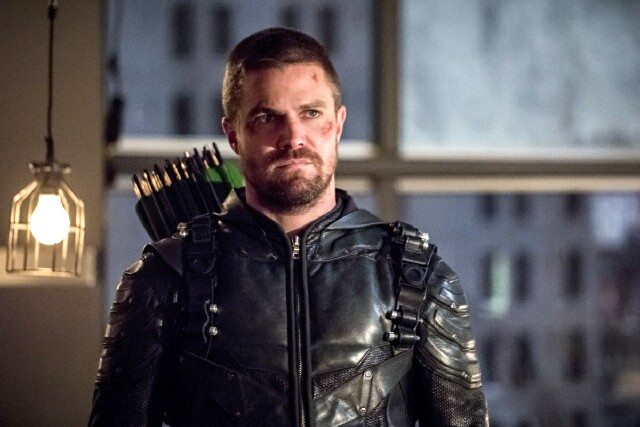 Fans of The CW’s Arrow recently bid farewell to the beloved character when, during the Crisis on Infinite Earths superhero crossover event, Oliver Queen sacrificed himself for the sake of humanity.  News of the character exiting the network's burgeoning superhero franchise was not exactly a secret, as it had been announced early last year that the series would be ending its run after the current ten-episode season.  The fact that the character perished, however, was something of a shocker, given that Arrow launched The CW’s hugely popular DC Comics universe of shows, which include Supergirl, Black Lightning, The Flash, Legends of Tomorrow and Batwoman -- and will soon add Stargirl, Superman & Lois and possibly The Canaries should the backdoor pilot that was telecast as an episode of Arrow last week go to series.

For Arrow star Stephen Amell, saying good-bye to the character he played for eight years was tough.  “It's been really emotional,” he admitted prior to the show ending.  “Every episode felt like we we're trying to put a button on a certain part of the show.  I got a chance to work with actors and characters I hadn't had a chance to work with in a bunch of years.  Many of our crew, despite the fact that they got offers for shows that are going to be filming 22 episodes this year, came back for these 10 episodes. Every day on set, I just [thought] about how lucky I am to have had this opportunity.

“It was a lot with every episode,” he continued.  “I knew leaving the show was going to be terribly sad.  I’m not gonna see [co-star] David Ramsey all the time and the crew.  I’ve made so many friends.  My life was in Vancouver, where we filmed, for the last eight years.  My daughter was born there, and the last season premiered on her sixth birthday, so it was a significant chapter of my life.”

According to Amell, stepping on set for the final ten episodes of Arrow, “didn’t feel different.”  In fact, there was more a feeling of melancholy.  “There was a bunch of sadness a bunch of times, but the thing about shooting that first scene of this last season was how familiar it felt,” he shared.  “I do stand by the decision we made midway through season six or so.  [Some] thought we might end during season seven.  What we did, at [executive producer] Greg Berlanti’s idea, having a run of 10 episodes to bookend an eight-year run, stuff like that doesn’t happen and was a blessing.

“All of my favorite shows have always had an ending,” he added.  “Like I didn’t like season three of Lost, then they announced they were going three more years and I loved seasons four, five and six.  I think the quality improved because they set an end date for themselves and I liked the ending of it.  I like most TV endings.  I liked Seinfeld, and I loved the last episode Game of Thrones.  I don’t know why people don’t like them.  I was a little ‘eh’ about the end of Breaking Bad and don’t know why everyone loves it.”

Looking back at the eight successful seasons of Arrow, Amell also reflected on the show’s beginning.  “When I started it was a job,” he recalled.  “I would’ve paid Warner Bros. $500 an episode just to be in that first season.  I didn’t foresee any of this, but frankly neither did anyone else.  If they say they did, they’re lying.  We were supposed to be the superhero show with no superpowers, and then we were hit.  Then DC Comics came to Greg (Berlanti) and Mark (Pedowitz) saying, ‘You guys can have The Flash.’ So it was like okay, but they told me in Greg’s office between season one and two that they wanted to build out the Justice League on TV.”

When it comes to the amassed stable of superhero shows currently on The CW’s roster, Amell has his own take on why those that followed Arrow have been successful.  “All of those shows are still going because of the people on them,” he asserted.  “I think Legends stands up because of Caity (Lotz), The Flash stands up because of Grant (Gustin) and Supergirl because of Melissa (Benoist).”

Amell is up for reprising the role, should he be called upon to do so.  “I don’t want to say ‘never say never’ because I will probably be wrong," he said.  "I do believe in a good clean break, but I’m not saying I won’t ever pop up again.”  If things work out in his favor as the set lights dim, he’ll be well prepared.  “I want to take one of the suits [as a souvenir],” he laughed in closing.  “My favorite suit was basically the season one suit [as it looked in] season three.  There had been a few alterations along the way, but that first suit was great.”

An Arrow retrospective and the series finale will be telecast Tuesday beginning at 8 p.m. on The CW.