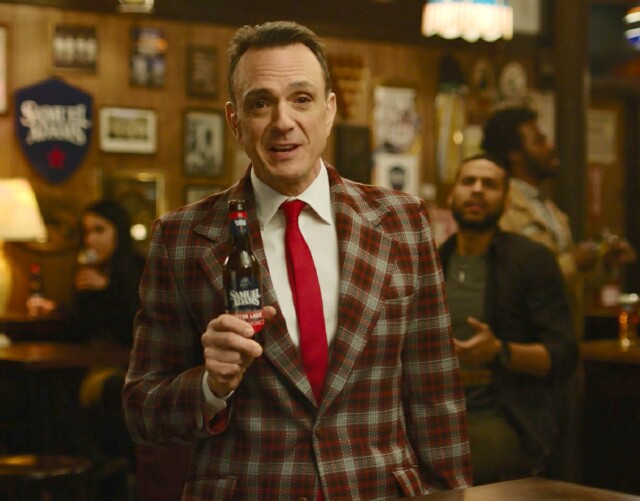 There's a long, colorful tradition of beer brands sponsoring baseball teams, among them Ballantine and the New York Yankees, who back in the day celebrated home runs as "Ballantine blasts"; Rheingold and the New York Mets; Narragansett and the Boston Red Sox; Heileman's Old Style and the Chicago Cubs; and National Bohemian and the Baltimore Orioles. For decades, a brewer, Anheuser-Busch, owned a team, the St. Louis Cardinals. As the marketing strategy for the new IFC series Brockmire illustrates, so close are the ties between beer and baseball that even a make-believe team can have a beer sponsor.

The imaginary team is the Morristown Frackers, based in the fictional town of Morristown, PA, and the beer is Samuel Adams, from the real-life Boston Beer Company. The Frackers play a major role in Brockmire and Boston Beer will, too, as a result of a deal between the brewer and IFC, part of AMC Networks.

The deal builds on a relationship between IFC and Boston Beer that includes what channel executives describe as a "megasponsorship" of the first two seasons of their series that spoofs documentary films, Documentary Now!  Like that agreement, the Brockmire megasponsorship will involve Samuel Adams in the marketing campaign, on and off the channel, for the series. The beer brand also will have a presence at Brockmire events hosted by IFC and will be featured in custom-made content to appear on air, online and in social media.

The partnership deal for Brockmire also calls for Samuel Adams signs and product to be integrated into episodes of the series, at the Frackers' ballpark and at a bar owned by the team's owner.

Brockmire, which makes its debut at 10 p.m. ET tonight, is about a disgraced former major league baseball announcer, Jim Brockmire, played by Hank Azaria of The Simpsons fame. The nature of his disgraceful behavior -- a profane, humiliating meltdown live, on the air during the game, after he learns about his wife's infidelity -- forces him into a decade-long exile from baseball, and the only job he can find upon his return is calling games for the lowly Frackers. Amanda Peet plays the team's strong-willed owner, who's a potential love interest for Brockmire, and Tyrel Jackson Williams plays the team's intern, who's Brockmire's assistant.

There are eight weekly episodes scheduled for Brockmire, which is getting a lot of advance buzz. For instance, it's No. 1 on the "To Do" list in the April 3-16 issue of New York magazine, and it's among the "People Picks" in the April 10 issue of People, which declares, "Azaria hits a homer as a has-been baseball announcer." MediaVillage.com's own Ed Martin says it is the funniest new comedy series of 2017 to date.

So pleased is IFC with the response that it's already renewing Brockmire for a second season, in 2018, also to run eight episodes.

The series revives a character that Azaria has played, on and off, since introducing him in 2010 in an episode of a web series for the comedy video site Funny or Die. Jim Brockmire is based on classic baseball announcers of the 1970s who wore garish sportscoats, spoke in stentorian tones about whatever was on their minds and found their outspoken, old-school approach to the sport, and life, called into question as times changed. Brockmire is ill at ease in an era when "viral" means video, smoking is virtually verboten and drinking in the broadcast booth definitely is a no-no.

IFC began working with Funny or Die on Brockmire after ordering a series based on the character in February 2016. Nine months later, AMC Networks bought a minority stake in Funny or Die, with plans to meld IFC's linear television offerings with the website's digital platforms.

In a significant instance of synergy, Funny or Die is producing the custom-made content for Brockmire and Boston Beer, which takes the form of a Samuel Adams commercial starring Azaria in character as Brockmire. The spot is to run on-air on IFC as well as across Funny or Die's digital and social platforms. (The Boston Beer deal is the first that IFC has sold together with Funny or Die since the channel took its stake in the website.)

The tie-up between Brockmire and Boston Beer is another example of one of the biggest trends in advertising, known as branded content, content marketing or branded entertainment. As consumers find more and more ways to avoid, zip through or zap traditional ads, brands, agencies and media companies urgently are seeking alternative means to reach them.

For example, the Dove brand owned by Unilever announced last week the launch of Real Beauty Productions, an in-house studio that will create video clips presenting stories about the lives of real women. The brand signed Shonda Rhimes, the TV producer, as creative director for the initiative.

Branded content has "stopping power," says Blake Callaway, Executive Vice President for Marketing and Digital Media at IFC, which is important for a channel like his because "our audience heavily time-shifts" what it watches.

"If you don't offer" branded content "as part of the advertiser solution mix, you're missing out," Callaway says, though he notes it's best for marketers who are "willing to put in more work" than is required for conventional commercial time buys. The megasponsorship was negotiated during last year's Upfront, he adds, and involved the Boston Beer media agency, Zenith.

A key issue with branded content, especially commercials that take on the trappings of TV programming, is that, unless it's done with a light hand, viewers perceive it to be too intrusive. That's unlikely in this instance, Callaway says, because of how organic the custom-made content will seem.

"It's going to fit in so naturally," he says, because along with stadiums named after brands and billboards in the outfields, "it's a tradition in baseball" to have "branded sponsorships integrated into the game" using teams' announcers to deliver the spiels. Callaway lists examples such as the Rolaids Relief Man Awards, the Verizon Call to the Bullpen and the whistle from the P.C. Richard jingle that is heard, after strikeouts, over the public-address system at Yankee Stadium.

It's also hugely helpful "to have the star of the show lean in so forward" with participation in the custom-made content, Callaway says.

"Hank Azaria says that Brockmire would, of course, be a pitchman for products," he adds, which "gives us a green light to knock on doors" of additional sponsors.

Cast members of other IFC series also have been part of branded content deals for those shows, which include the hugely popular comedy Portlandia. Among the elements of the partnership between Documentary Now! and Boston Beer, Callaway says, were "a PBS-style pledge drive," reflecting how the series was meant to seem like "a long-running PBS show"; an offer of a boxed set of episodes "in a Boston Beer beer barrel," and "a talk-back show with Boston Beer as the presenting sponsor."

Callaway already is thinking ahead for Brockmire.

"If there's a second season, we'll have to have hot dogs and carburetors," he says, laughing, and "Brockmire's in on the pitch."

Note: Look for the next Stuart Elliott Report on Wednesday, May 3.

Photo courtesy of IFC.The opinions and points of view expressed in this article are exclusively the views of the author and/or subject(s) and do not necessarily represent the views of MediaVillage.com/MyersBizNet, Inc. management or associated bloggers.