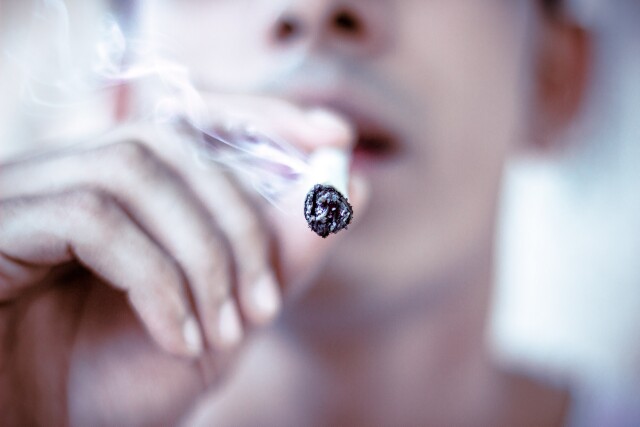 One of the genius things about Mad Men was its depiction of how central cigarette advertising was to the Madison Avenue of the 1960s, from Don Draper's work on the Lucky Strike account ("It's toasted") to the full-page, open-letter ad that he took out in the New York Times, headlined, "Why I'm quitting Tobacco."  Even after cigarette commercials vanished from TV and radio at the end of 1970, Big Tobacco remained a force to be reckoned with, spending billions of dollars a year on the marketing methods it still could employ such as print ads and promotions.

And there were other reasons agencies continued to work with cigarette makers.  I heard for many years that one giant tobacco firm kept paying its principal shop a 15% commission on billings -- long, long after lower commissions and fee-based compensation had become commonplace.

It took decades for attitudes to change so that Mad Men (and Women) working on cigarette accounts was the exception rather than the rule.  A major turning point arrived in 1998 with what was called the Tobacco Master Settlement Agreement, further restricting cigarette marketing tactics and funding a youth anti-smoking initiative now known as the Truth Initiative.  You can draw a straight line between those steps and the measures proposed last month by the Food and Drug Administration that include banning menthol cigarettes -- goodbye, Kool and Newport? -- and restricting sales of sweet-flavored vaping liquids for e-cigarettes.

In fact, the delegitimization -- even demonization -- of smoking has become so accepted as a societal norm that it's sometimes hard to remember that tobacco products once were openly and regularly advertised in mainstream media:  Endorsed by actors, athletes and medical professionals; praised in commercials featuring the casts of the TV programs they sponsored, and occasionally peddled by cartoon characters.

These days, even cigarette companies declare they're against cigarettes, as witnessed by a campaign introduced in September by Philip Morris International that was kicked off with -- Don Draper would be so proud -- a full-page, open-letter ad in the Times.  The ad proclaimed that smokers "deserve better alternatives to cigarettes"; a "manifesto" on the firm's website promises that smoke-free products "will one day replace cigarettes."

What's prompting me to think about how drastically opinions about smoking have changed, in the span of a generation or two, is the recent flood of negative coverage of social media platforms in general and Facebook in particular.  Each headline, it seems, is worse than the one before: "How Facebook's Attack Dog Tried to Undermine Senators," "Facebook Uses Holiday to Drop Bad News," "Facebook Film Holds a Warning for Today," "'No Morals': Advertisers Voice Criticism of Tech Giant," "Sheryl Sandberg Is Said to Have Asked Facebook Staff to Research George Soros," "Zuckerberg Snubs a Multinational Inquiry Into Facebook's Practices."

As damaging as the headlines are, the accompanying articles are, perhaps, even more damning.  Not only has Facebook "repeatedly breached its users' trust," wrote Farhad Manjoo, a tech columnist for the Times, but the internet ad business "lies at the heart of just about every terrible thing online."

(Pause to consider that for a moment.  Consumers long have complained about TV ads and junk mail, but flat-out identifying them as the root of almost all evil in media?  I don't think so.)

Also, a Times reporter, Nick Confessore, accused Facebook's top leaders of a cover-up, doing "everything they could to keep people from knowing" the "dark side to the thing they had built."  And an opinion piece by a philosophy professor, S. Matthew Liao, which asked bluntly, "Do you have a moral duty to leave Facebook?"  He concluded that it's okay to stay, for now -- but "if new information suggests that Facebook has created a moral red line, we will all have an obligation to opt out."

Compare all that with how warmly Facebook and other social media platforms were welcomed not that long ago -- and how their top executives were showered with praise, lionized for leaning in and whatnot -- and it's not hard to see the makings of another massive shift in the zeitgeist similar to what hit Big Tobacco right between the butts.

Every time I see photos or video of senior managers of Facebook or other platforms on the hot seat in front of Congress, the U.K. Parliament or the European Union, it reminds me of the now-infamous images of leaders of seven cigarette makers appearing before a House subcommittee in 1994 and swearing their products weren't addictive.  Their lies earned them the nickname "the seven dwarfs," which they, their firms and their industry never lived down.

Maybe I'm too eager to spot patterns and identify an instance of history repeating itself when it's not the case.  Or maybe all that's gone on lately represents growing pains for Facebook and the rest, which in retrospect we'll realize were bumps in the road.  After all, plenty of folks were ready to count out the internet after the dot-com bust, but of course it rebounded (and then some).

Still, I can't help but whistle a vintage cigarette jingle or two and ponder what their contemporary equivalents might be.  Anyone for "Facebook friends good like social media should"?

Note:  This is the final Stuart Elliott Report.  Thanks for reading, commenting and sharing for the last three and a half years.