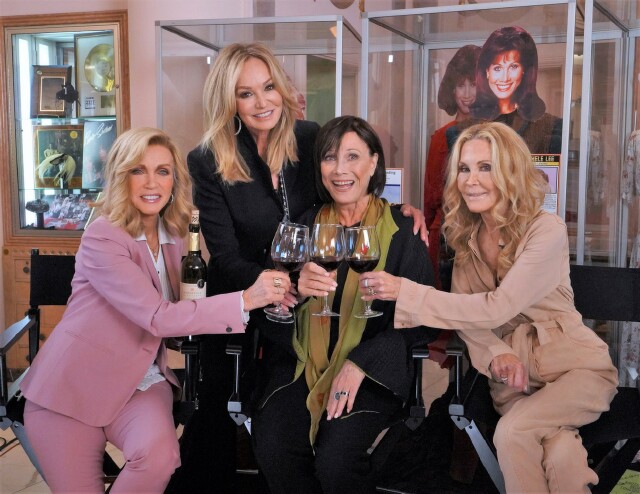 During the 1970s and '80s and into the '90s, multi-talented performer Susan Anton remained a familiar face both on stage and television. Throughout her career, Anton appeared in numerous commercials, had her own variety specials, became a popular poster girl (alongside Farrah Fawcett and Suzanne Somers), and had guest roles on everything from The Love Boat and Murder She Wrote to Baywatch. Most recently Anton has been content behind the scenes, working alongside her husband Jeff Lester at their production company, Big Picture Studios; that was, until she received an offer to step in front of the camera again as the host of Idol Chat, a new talk show.

"My husband and I were hanging out several months ago," she revealed in an exclusive interview with MediaVillage. "The pandemic is raging, nobody's doing anything, we're watching a movie when I checked my e-mail. I turned to my husband said, "Listen to this; there's a TV show they want me to host that reunites [stars of] classic sitcoms, people from the recording industry, and the casts of movies," and it was a flat offer to do eight episodes! I was over the moon excited and so thrilled; it was an instant yes. So many of the people we feature I watched growing up, had worked with, or had admired their work! I just thought, 'This will be just like visiting old friends.'" Filming Idol Chat at The Hollywood Museum, in the heart of Hollywood, Anton did indeed get to sit down with some old friends -- like the cast of The Love Boat (pictured above) and the surviving Pointer Sisters (pictured below). "I was really looking forward to being reunited with The Love Boat cast," she shared. "I did The Love Boat when they went to China, and I hadn't seen everybody since then. So, that was a double reunion, for them and for me. Unfortunately, Gavin McCloud was ill and couldn't be there, then sadly passed not long after that, but they all spoke so lovingly of him, and they were all still so very close. "The Pointer Sisters I worked with when we went to Germany with Suzanne Somers," she continued. "She [did] a Christmas special over there, so it was Suzanne Somers; 10,000 GIs; Jonathan Winters; The Pointer Sisters, and me as guest stars. I hadn't seen them since! Sadly, two of the Sisters are now gone, but so it was poignant and kind of bittersweet to reunite. We sang "I'm So Excited" because I was! They were always an inspiration for new material for my nightclub act and one of the first acts to combine a music video with a movie like Beverly Hills Cop. Also, as women, and a Black act, they were groundbreakers of the time!"

Over the eight episodes, Anton also got to make some new friends. One reunion actually set her heart aflutter. "Well, I was so excited to meet Tony Dow, Jerry Mathers and Stephen Talbot," she beamed. (Anton is pictured below with Dow, left, and Mathers, right). As a young girl, like everyone in America, I watched Leave It to Beaver. I had such a crush on Tony (as Wally). They were so much fun. Hearing some of their behind-the-scenes stories. It was just such a charming, smart show and one of the first to look at the world through the eyes of young people instead of parents always being right." Anton admits her first impression of Idol Chat on paper translated to the camera. Especially when it came to reuniting the ladies of Knots Landing. "It was so funny," she recalled. "Donna Mills' Abby character was such a terrible woman on the show, yet Michelle Lee, Joan Van Ark and Donna are incredibly good friends. It was funny to hear how they'd have these catfights on camera, then go have dinner and giggle. They seemed to be so genuinely excited to be together." (Mills, Anton, Lee and Van Ark are pictured at top, left to right.)

In addition to the nostalgic aspect of the series, she's proud to have created these "time capsule moments" surrounded by the history displayed at the Hollywood Museum. "It did feel like that," she smiled. "When I was talking to Tony Dow, I'm thinking about watching Leave It to Beaver, and thinking about all the other people at home, hopefully watching Idol Chat, and what would they want to ask Wally and the Beaver. It's so wonderful they're still so active and their fans know that they are. These [people] really are icons." Idol Chat has something for anyone with a passion for nostalgia. Be it the casts of Happy Days (Marion Ross, Henry Winkler, Don Most and Anson Williams) or E.T. the Extra-terrestrial (Dee Wallace and Robert MacNaughton) or major players from The World of Sid & Marty Kroft, Anton gets the scoop on everything. Even Lost In Space, although when sitting down with its original stars Angela Cartwright (above left) and Marta Kristen (above right) she had a different perspective. "I watched [Angela] on Make Room for Daddy and in The Sound of Music," she laughed. "I'm like, why don't we know each other? I've never met her, but I grew up with her.

"You do feel like you know these people as they are in your living room," she added in closing. "I've met a lot of people through the course of [my] professional life, but [didn't] really know them. Then here I am talking to Henry Winkler about his new book and his Emmy Award. He's one of the most charming people on the planet -- who doesn't love The Fonz?"

Idol Chat premieres Sunday, September 12 at 7:30 p.m. on The Family Channel and at 8 p.m. on Retro TV. Each episode will be available to stream on the Retro TV app the day after it premieres.