"Tales of the Walking Dead:" Fresh Takes on Familiar Zombies 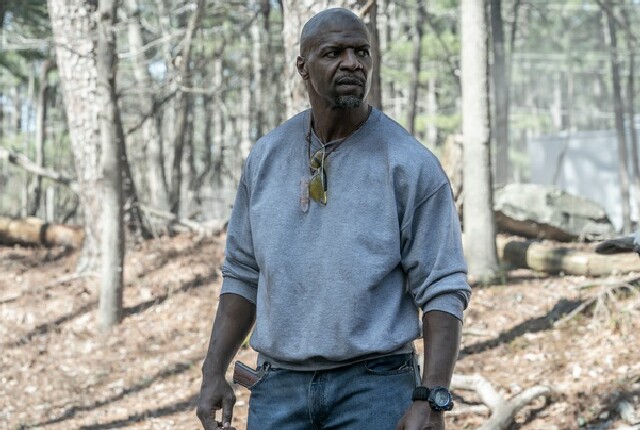 I was never a hardcore Walking Dead fan, but I was pretty into the series just before the gruesome introduction of Neegan and that damned bat of his. Needless to say, I was a little turned off after that. Fortunately, AMC's Tales of the Walking Dead is nothing like that. It's not really a spin off, so much as it's an anthology series taking place in the Walking Dead universe. This, of course, means that each episode features a different set of people, a different set of circumstances, and a completely different reason to come back every time, even though every time you do, it's a completely different experience. So, the question is, are these tales worthy of being told in the first place? So far, it feels like a "yes."

Let's start with the first episode, "Evie/Joe." Olivia Munn and Terry Crews star as the respective title characters. Joe is a doomsday prepper who lives alone with his dog, at least until his dog eats it by, you know, getting eaten. This sends him on the road to meet another prepper that he used to romance online. He ends up falling into a trap laid by Evie, who's more of hippie, "everything organic" type of gal who's looking to hitch a ride back to her ex-husband's old place to see if he's still alive. Even though they're opposites, and she basically kidnaps him at gunpoint, they eventually warm up to each other. Cue zombies.

First things first: I straight up love both these actors. I'm still obsessed with Brooklyn Nine-Nine, and I've been a fan of Olivia Munn since she co-hosted Attack of the Show way back when the G4TV channel was a thing. That said, this one felt just a little bit off to me. Call it the curse of being in so many comedies, but I found it a tad difficult to take Crews' performance seriously. Nothing against him as an actor, but unless he was emoting sadness, I wasn't really buying it for some reason. As far as their chemistry went, Crews and Munn seemed to bounce off each other rather nicely, and when the action eventually picked up the whole thing became a lot more exciting.

This brings us to episode two, "Blair/Gina," starring the always hilarious Jillian Bell, and Parker Posey, who's been in everything from Dazed and Confused to Blade: Trinity to Netflix's Lost in Space series. This one's been my favorite episode of the three that are currently out. Bell and Posey play Gina and Blair, respectively. In this story the zombie apocalypse is just starting, so life is still normal at the beginning of the episode. Blair works at an insurance company, Gina's her boss, and they hate each other. While gassing up to escape town, Blair witnesses Gina arrive at the same gas station and try to steal the fuel tanker with a shotgun. Before long, there's a tussle, the gun goes off, and everybody dies. This starts a Russian Doll-style type of time loop, where no matter what either of them do, they both somehow die, usually at the gas station, and both end up back at the office, just before they do it all again.

I loved this episode. It was kinetic and funny in a buddy-flick kind of way, even though these characters are far from friends. Even something simple like the setup kept me asking questions the entire time because, to my knowledge, time-bending occurrences like this aren't the norm in the Walking Dead universe.

The third and most recent episode, "Dee," is the show's first episode to break away from the dual main character pattern it was starting to establish. Starring Samantha Morton (who's been on The Walking Dead as a character named Alpha), "Dee" follows, you guessed it, a character named Dee who, along with her daughter Lydia (Scarlett Blum), have been staying on a vintage steamboat run by a woman named Brooke (Lauren Glazier). The environment on the boat is clean and safe, and everyone there maintains an air of normalcy, as per the rules. That is, at least until a coup happens, and Dee must return to her violent ways in order to protect her daughter.

I've got to say that this episode is the one that felt the most like the O.G. Walking Dead so far. The first one kind of gave me Walking Dead-lite, and the second one, as entertaining as it was, wasn't exactly your typical WD episode. This one, unlike the first two, held true to the dark and ominous vibes of the original. Morton is exceptional here, as well. The intensity with which she does just about everything as Dee seems pretty extra when compared to that of her neighbors on the boat, but when the shit finally hits the fan, it becomes clear that the ones fooling themselves were the people pretending anything was still normal. I'm not going to completely spoil the episode, but like I said, Dee's demeanor is always the more appropriate one, regardless of how she was treated.

The great thing about Tales of the Walking Dead is the same thing that could potentially work against it -- it's anthological nature. Had every episode been like "Evie/Joe" in terms of tone, for example, I might not have remained as interested in the series, but after "Blair/Gina," I was basically hooked. The problem is it could also go the other way. What if whatever follows "Dee" isn't as compelling? Fortunately, these first three episodes have raised the bar high enough to justify holding out for more.